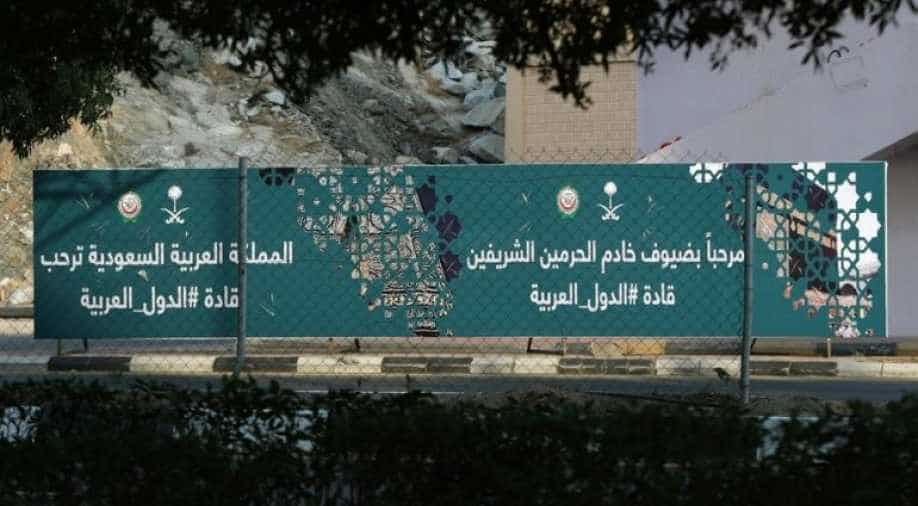 A sign welcoming participants is pictured in the Saudi holy city of Mecca ahead of the upcoming twin summits of the Arab League and of the Gulf Cooperation Council. Photograph:( AFP )

The three summits in Mecca, Islam's holiest city, allow US ally Riyadh the chance to present unified Islamic, Arab and Gulf fronts against its arch-rival Tehran.

Regional heavyweight Saudi Arabia hosts Islamic, Arab and Gulf summits this week as tensions between Iran and the US raised fears of military escalation.

The three summits in Mecca, Islam's holiest city, allow US ally Riyadh the chance to present unified Islamic, Arab and Gulf fronts against its arch-rival Tehran.

Iran itself has not yet confirmed whether it will attend the meeting of the Organisation of the Islamic Cooperation (OIC), of which it is a member.

Washington has reinstated tough sanctions against Tehran and decided to deploy 1,500 more troops to the Middle East amid sabotage attacks on oil facilities.

Two Saudi oil tankers, among four vessels, were the targets of mysterious acts of sabotage of the United Arab Emirates (UAE) this month, and Iran-aligned Yemeni rebels have stepped up drone attacks on the kingdom -- one of which resulted in the temporary shutdown of a major oil pipeline.

Tehran has repeatedly threatened to close the strategic Strait of Hormuz, through which 35 per cent of the world's seaborne oil passes.

The Arab League and Gulf Cooperation Council (GCC) emergency summits called by Saudi Arabia are to be held on Thursday, a day before the long-scheduled OIC summit.

It is not yet clear how many countries will take part in the emergency gatherings, but Qatar -- which has been boycotted by a Saudi-led alliance -- has been invited to attend the GCC meeting.

Riyadh cut diplomatic ties with Tehran in 2016 after protesters stormed Saudi diplomatic missions in Iran following its execution of a prominent Shiite cleric.

The OIC summit will address "current issues in the Muslim world" and "recent developments in a number of OIC member states", the official agenda states.

Saudi Arabia and its allies have repeatedly accused Iran of interfering in the affairs of other countries, including Bahrain, Iraq, Syria, Lebanon and Yemen, by supporting and arming fighters.

"Unity and coordination of positions are necessary at this critical time, and Riyadh... is qualified to play that role," the UAE minister of state for foreign affairs, Anwar Gargash, tweeted last week.

But the kingdom's aim of a unified Islamic, Arab and Gulf position is likely to be difficult to achieve.

Qatar has grown closer to Iran, while Kuwait has expressed concern over Iranian threats to close the Strait of Hormuz.

Oman, which has good ties with both Iran and the United States, has said it and other parties "seek to calm tensions" between the two countries.

Ahead of the summits, Iran's top diplomats have been touring the region, including Iraq, Kuwait, Oman and Qatar.

Iran, which shares a border with Afghanistan, Pakistan, Iraq and Turkey, also has good relations with Ankara and Islamabad.

"Several countries may not like Iran and its regional misbehaviour but may prefer to avoid a confrontational or condemning stance," said Simon Henderson, a researcher at the Washington Institute for Near East Policy.

Saudi Arabia and the US have accused Iran of being the mastermind behind the Yemeni rebels' attack on a major pipeline, while an investigation has been launched into the attacks on ships off the UAE.

The US Central Command, which oversees American military operations in the Middle East, has between 60,000 and 80,000 troops deployed in the area.

On Friday, US President Donald Trump bypassed Congress to sell $8.1 billion in arms to Saudi Arabia and other Arab allies, citing an alleged threat from Iran.

"Resuming its (Iran's) nuclear activities, making its presence felt in the region, and disrupting Saudi or Emirati oil exports could all be ways of enhancing its bargaining power," the International Crisis Group said in a report.

"But if these manoeuvres are a diplomatic game, it is a dangerous one: either side could misinterpret the other's intentions."

Saudi Foreign Minister Adel al-Jubeir has said his country does not want to go to war with Iran but was ready to defend its interests.