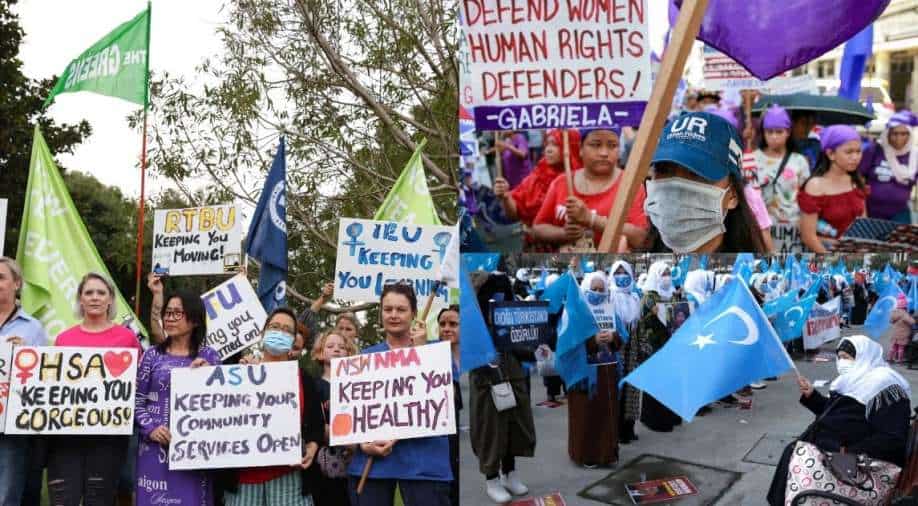 Thousands of women from Tokyo to Manila marched on Monday in defiance of power-grabbing generals and patriarchal governments, as rallies across the world kicked off a global day of action for International Women's Day

March 8 is celebrated as International Women's Day all across the globe. It marks the success and highlights the challenges faced by women.

Thousands of women from Tokyo to Manila marched on Monday in defiance of power-grabbing generals and patriarchal governments, as rallies across the world kicked off a global day of action for International Women's Day.

Also see| This is how Women's Day was celebrated world over

How far have we come?

The sati system, wherein a widow would throw herself on her husband's pyre and burn to death prevailed in India during the early 19th century. However, it is banned now.

Unfortunately, widows are still ostracised in several parts of the country.

There was a time when child marriage was rampant. However, today it is outlawed.

Today, in theory, women are at par with men, at least in most countries.

How much of it translates into practice?

About a hundred people joined a march for International Women's Day in central Tokyo on Monday to call for gender equality in Japan.

Holding banners and chanting slogans such as "stop sexual harassment", protesters started the march from Shibuya, one of Tokyo's busiest shopping districts, and walked through the streets.

Hundreds of mostly female workers gathered outside government buildings in Sydney to condemn violence against women and call for greater gender equality in workplaces, amid growing scrutiny over the treatment of women in Australian politics.

A variety of workers - from nurses and teachers to hairdressers and transport workers - took part in the gathering. It comes as the government launched a A$19 million ($14.57 million) campaign urging people to speak up when they witness disrespect against women.

Hundreds of female demonstrators rallied in the Philippine capital on Monday to mark International Women's Day and took aim at the country's president Rodrigo Duterte for alleged rights abuses against women.

The protesters, most members of women's group Gabriela, marched through the streets of the capital near the presidential palace, and held a rally to criticise the government's efforts during the coronavirus pandemic, as well as the deadly crackdown.

The protesters chanted "stop the genocide" and "close the camps" as they marched within a few hundred metres of China's walled-off consulate in Istanbul.

Hundreds gathered in the centre of Paris on Monday as they called for a day of "feminist strikes" and rallies, to denounce the injustices suffered by women. Several organisations and unions are calling for a strike to denounce pay inequality as women earn only 77 per cent of men's income.

According to Anna Azaria, the president of Women Equality Organisation, "Feminist jobs are poorly paid, and not valued. The pandemic shed light to their importance. So really, we're here to shout loud and clear that these jobs need to be re-evaluated and salaries need to be increased."

Hundreds of feminist protesters on Monday defied the government's ban of marches to celebrate International Women's Day and gathered in small groups across Madrid.

Last year's marches, which were attended by tens of thousands and promoted heavily by the left-wing coalition government, stirred a bitter row over whether they were super-spreader events for the coronavirus.

On March 4, the central government's chief representative in Madrid, Jose Manuel Franco, said proposed marches on March 7-8, would have brought at least 60,000 people to the capital's streets.

The decision sparked anger among feminists, and some gathering at Sol square slammed the government for not authorising the marches.

Women around the world are desperate to get the rights they are entitled to. They have been fighting for too long for the most basic of rights such as equality, safety and the right to work.

As per Article 14 of the Indian constitution, ''the state shall not deny to any person equality before the law.''

In Nepal, women still die in menstrual huts because of cold and hunger and lack of proper healthcare. As a result of this, there is a rise in the number of cervical cancer cases.

In Afghanistan, women journalists are still attacked. While in Bangladesh, women sex workers are denied a proper funeral.

In El Salvador, women are jailed for miscarriage, while in Argentina, women are killed-- because they are women.

So while we celebrate the road we've travelled so far, we should not lose focus on the road ahead.