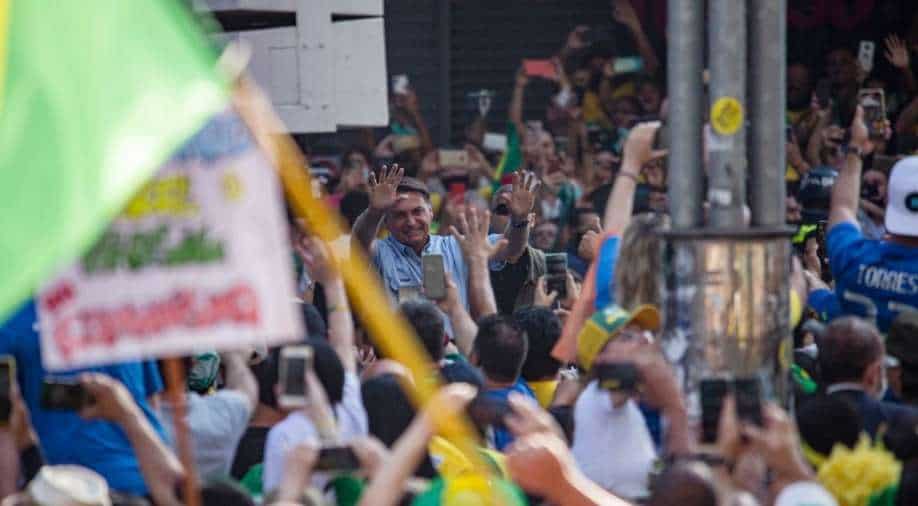 Prices are climbing faster than they have in almost two decades in Brazil, a country with a relatively recent history of disastrous inflationary episodes

To all those who would pose a challenge to Jair Bolsonaro in Brazil’s coming presidential election, including the press, the Supreme Court and liberals, the embattled right-wing leader has an answer: “Only God removes me.”

But Bolsonaro might be unseated by an unexpected problem that his political playbook has no easy answer for: inflation.

Prices are climbing faster than they have in almost two decades in Brazil, a country with a relatively recent history of disastrous inflationary episodes. The currency has steadily declined in value, losing roughly 10% against the dollar in the last six months alone. And the economy, Latin America’s largest, slipped back into recession in the third quarter.

That has upset people like Lucia Regina da Silva. A 65-year-old retired nursing assistant and former Bolsonaro supporter, she has watched over the last year as surging prices have eroded the purchasing power of her modest monthly pension.

“I believed this government would improve our lives,” said da Silva on a recent morning as she pushed a mostly empty shopping cart — a few vegetables and some personal products were all she could afford — through the aisles of Campeão, a cheap supermarket chain in Rio de Janeiro. “But that was flawed.”

Bolsonaro is among a generation of right-wing populists who, in the past decade and a half, have risen to power in democracies like Turkey, Brazil and Hungary, and whose reigns have coincided, at least at first, with periods of solid economic performance in those countries. They have remained in power by stoking nationalist passions and driving deep wedges into the electorate with hot-button cultural issues. Along the way, they have co-opted the news media and cowed opponents.

Now these strongmen — including Bolsonaro, Prime Minister Viktor Orban of Hungary and President Recep Tayyip Erdogan of Turkey — are grappling with rising prices, even as they face national elections within the next two years. A new and unexpected peril, inflation is threatening to organize and animate political opposition in the countries of these three leaders in a way few would have predicted just a few months ago.

In Hungary, where consumer prices are rising at their fastest pace since 2007, polls suggest that Orban will face his toughest election ever next year, as the cost of living and low wages become top concerns for voters.

Voters in the nearby Czech Republic — which has faced rising inflation and soaring energy costs — just ousted Andrej Babis, the country’s billionaire right-wing populist prime minister, by a narrow margin.

In anticipation, Bolsonaro has begun laying the groundwork to dispute the results of next year’s vote, which the polls suggest he would lose badly if it were held today. “I want to tell those who want to make me unelectable in Brazil, only God removes me,” he told a cheering crowd in São Paulo in September.

But da Silva has already incorporated the economic crisis into his recent campaign. “The Bolsonaro government is responsible for inflation,” he said in an interview. “Inflation is out of control.”

The situation is most dire in Turkey, where the unorthodox economic policies of Erdogan have set off a full-on currency crisis. The value of the lira has collapsed roughly 45% this year. And prices are now rising at an official rate of more than 20% annually, with some unofficial estimates even higher.

Countries with right-wing populist leaders are not the only ones reeling from inflation. In the United States, prices are rising at their fastest rate since 1982. And left-leaning populists, such as those in power in Argentina, are also contending with fierce inflationary currents, which have put them on the defensive.

The upsurge represents a sudden break from the trend of sluggish growth and tepid inflation that dominated the global economy for roughly a dozen years before the pandemic hit. That low-growth backdrop allowed powerful central banks in the United States, the European Union and Britain to keep interest rates low. And those decisions had large implications for poorer countries around the world.

That is because the low-rate policies made by central banks such as the Federal Reserve reduce the returns investors in wealthy nations can make by buying safe government bonds in their home countries, pushing them into riskier investments in emerging markets that promise higher returns.

Economists say that flow of money toward developing nations might have been an underappreciated element of the success right-wing populist leaders have enjoyed in recent years, as it provided a steadily favorable economic tail wind that coincided with their time in power.

Turkey, which suffered a sharp recession in 2009, was able to rebound relatively quickly thanks to a surge of borrowing from foreign investors that supercharged growth. Bolsonaro’s election in 2018 coincided with a fresh push to lower interest rates from the Federal Reserve, which prompted U.S. investors to buy more emerging market debt and helped prop up the real.

“Since the global financial recession, the global macroeconomic environment was a godsend to authoritarians,” said Daron Acemoglu, a professor of economics at the Massachusetts Institute of Technology who has studied the deterioration of democracies. “Essentially, with very low interest rates, it made many countries that had either weak democracies or semi-authoritarianism, or sometimes fully fledged authoritarianism, still attractive to foreign capital.”

But as the global economy began to heal from the pandemic this year, a combination of supply chain disruptions, central bank money-printing and government spending aimed at juicing the recovery ignited a sharp rise in prices around the world. That prompted leaders in many developing countries to tweak their policies — and global investors to rethink their investments in those markets.

Claudia Calich, head of emerging market debt at M&G Investments in London, has invested in Turkish government bonds, denominated in lira, for years. But, Calich said, the increasing public pressure that Erdogan was putting on the country’s central bank to cut interest rates this year led the fund to sell its entire position.

“As soon as we started seeing the changes this year going in the wrong direction, namely for further rate reductions, then we started getting worried about the currency,” Calich said. “That has been, so far, the wrong policy response. And yeah, we’ve been very happy to have exited that position.”

There are few politically palatable options for emerging market countries dealing with an inflationary upsurge and weakening currencies. But for a number of reasons, the inflationary rise is especially tricky political terrain for populists like Orban, Erdogan and Bolsonaro, who all face elections in 2022 or 2023.

Their personalized approach to politics — and the fact that they have all been in office for years — makes it difficult for them to sidestep blame for the condition of the economy. At the same time, their brand of populism, which emphasizes nationalist rivalries and has been effective in the past, can seem out of touch to citizens whose standards of living are swiftly plummeting.

The traditional remedy for inflation would call for some combination of higher interest rates from the central bank and skimpier government spending. But both moves would probably hurt economic growth and employment, at least in the short term, potentially worsening prospects of reelection.

In Turkey, Erdogan — who has adopted an increasingly authoritarian leadership style since surviving a coup attempt in 2016 — has ruled out such a conventional response. In recent weeks, the Central Bank of the Republic of Turkey, essentially under Erdogan’s personal control, has repeatedly cut interest rates.

Most observers think Erdogan has made a difficult situation much worse, with the prospect of more interest rate cuts and currency declines driving foreign investors to pull their money from Turkey.

At the same time, the political winds also seem to be blowing against Erdogan. The worsening economic situation has prompted scattered street protests. Opposition politicians are calling for snap elections to deal with the crisis, while hammering Erdogan for what they call his disastrous management of the economy.

Orban and Bolsonaro, both of whom once fashioned themselves as conservative budgeteers, have abandoned their previous positions. Instead, they are pushing a short-term surge of spending to provide an influx of cash to voters before next year’s elections. It is unclear that such an approach will help, however, as it is likely to make inflationary pressures worse.

Sitting on a bench at a local farmers market in Budapest, Hungary, on a recent afternoon, Marton Varjai, 68, laughed at the $250 check Orban recently sent him, part of a payout his government authorized to all pensioners, who amount to roughly 20% of the population.

Varjai earns a monthly pension of about $358, of which 85% goes to covering medicine and utilities. “The rest is what I have to live off,” he said, adding that he was concerned about his ability to make ends meet.

Such sentiments are becoming an increasing focus for Hungarian voters. A recent study by Policy Solutions, a progressive think tank in Budapest, found that Hungarians are most concerned with the cost of living and low wages.

“If these issues dominate the campaign, it’s not good for Fidesz,” said Andras Biro-Nagy, director of Policy Solutions, referring to Orban’s ruling party.