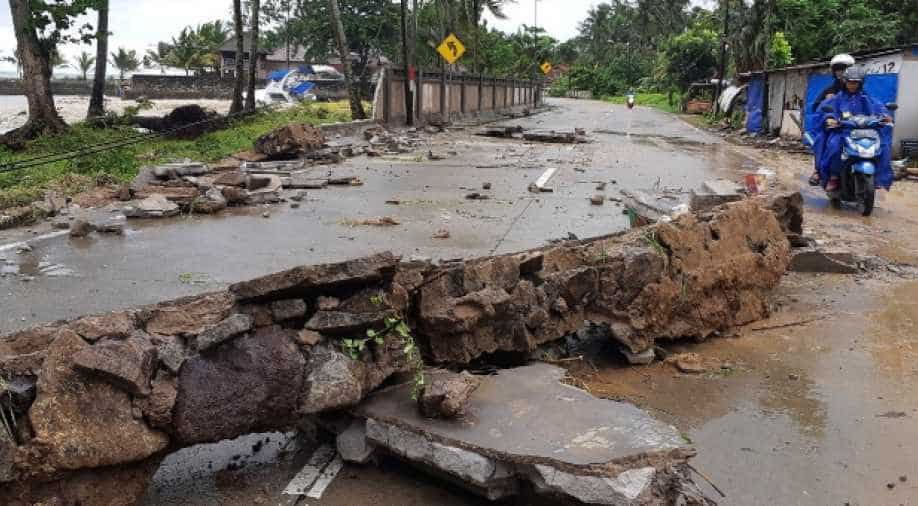 A tsunami killed more than 200 people and injured hundreds on the Indonesian islands of Java and Sumatra following an underwater landslide believed to be caused by erupting of Anak Krakatau volcano. Photograph:( Reuters )

Experts say Anak Krakatoa emerged around 1928 in the caldera of Krakatoa, a volcanic island that violently erupted in 1883.

The volcano that triggered a deadly tsunami in Indonesia late Saturday emerged from the sea around the legendary Krakatau 90 years ago and has been on a high-level eruption watchlist for the past decade.

Anak Krakatau (the "Child of Krakatau") has been particularly active since June, occasionally sending massive plumes of ash high into the sky and in October a tour boat was nearly hit by lava bombs from the erupting volcano.

Experts say Anak Krakatau emerged around 1928 in the caldera of Krakatau, a volcanic island that violently erupted in 1883.

With subsequent lava flows it grew from a submarine setting to become a small volcanic island, with the cone now standing at an altitude of around 300 metres (1,000 feet) above sea level.

Since its birth, Anak Krakatau has been in a "state of semi-continuous eruptive activity", growing bigger as it experiences eruptions every two to three years, volcanology professor Ray Cas from Monash University in Australia told AFP.

"Most of the eruptions are relatively small on the scale of explosive eruptions ... and there's also eruptions that produce lava flows," he added.

Cas said the latest event appeared to be "a relatively small explosive eruption" but could then have triggered or coincided with a submarine event like a landslide or earthquake, causing the deadly tsunami.

No one lives on the island, but the peak is popular with tourists and is a major study area for volcanologists.

The island is part of the Ujung Kulon National Park, "demonstrating on-going evolution of geological processes", since the Krakatau eruption, UNESCO says on its World Heritage site listing for the area.

When Krakatau erupted on August 27, 1883 it shot a column of ash more than 20 kilometres (12 miles) into the air in a series of powerful explosions that were heard in Australia and up to 4,500 kilometres away near Mauritius.

The massive cloud of ash plunged the area into darkness for two days. The dust gave rise to spectacular sunsets and sunrises around the world the following year and disrupted weather patterns for years.

The tsunami triggered by the eruption killed more than 36,000 people in one of the world's worst natural disasters.

Indonesia's proximity to the junction of three continental plates, which jostle under immense pressure, makes it particularly vulnerable to earthquakes and eruptions.

The archipelago nation has nearly 130 active volcanoes, forming part of the Pacific "Ring of Fire" -- an arc of intense seismic activity that stretches from quake-prone Japan through Southeast Asia and across the Pacific basin.