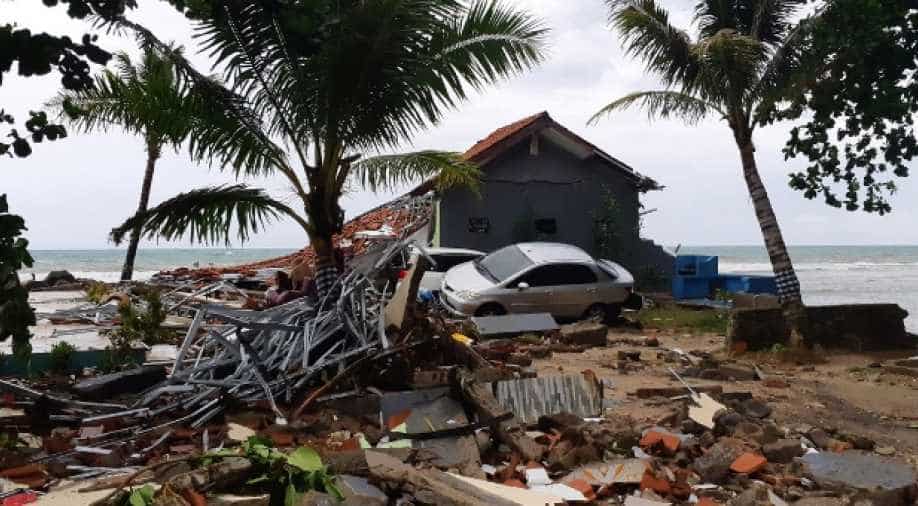 A car is seen among ruins after a tsunami hit Carita beach in Pandeglang, Banten province, Indonesia. Photograph:( Reuters )

As per reports, the eruption of Anak Krakatau volcano is believed to be the cause of Indonesia tsunami which has damaged hundreds of homes and other buildings.

The death toll from a volcano-triggered tsunami in Indonesia has climbed to 222 with over 800 people injured, news agency AFP reported.

"This number is predicted to increase because not all victims have been successfully evacuated, not all health centres have reported victims and not all locations have got complete data."

As per reports, the eruption of Anak Krakatau volcano is believed to be the cause of Indonesia tsunami which has damaged hundreds of homes and other buildings. The highly active Anak Krakatau, is a new island formed by underwater eruption in 1927.

The tsunami struck along the rim of Indonesia's Sunda Strait following an underwater landslide caused by the eruption of Anak Krakatau. The waves were exacerbated by an abnormally high tide because of the full moon, officials said on Sunday, news agency Reuters reported.

Residents and tourists in coastal areas around the Sunda Strait have been directed to stay away from beaches. A high-tide warning has been placed in till December 25.

As per reports, no warning signs were seen or felt by coastal residents before waves of up to two meters washed ashore.