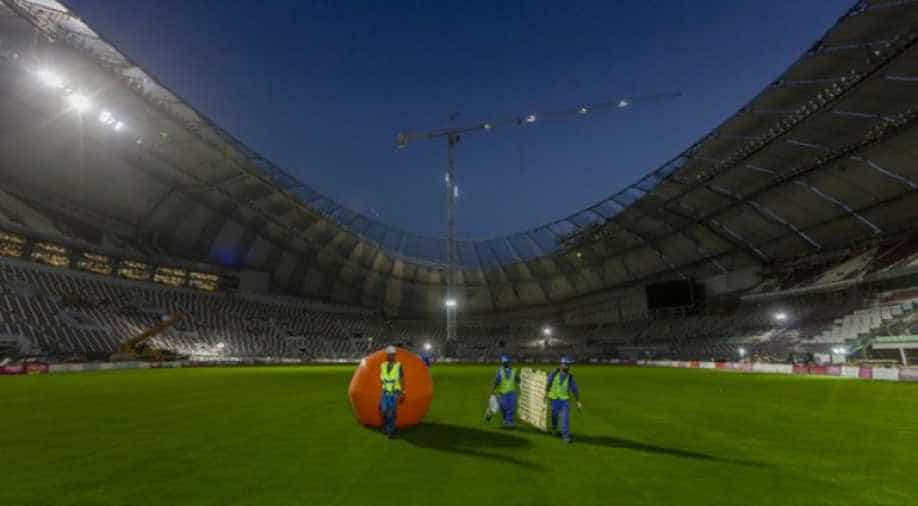 Conditions for workers from India, Nepal and Bangladesh have come under scrutiny from rights groups, who say the migrants live in squalor and work without proper access to water and shelter from the sun. Photograph:( Reuters )

Carpenter Jagdesh Kumar, 54, fell unconscious on May 4 about half an hour after leaving Doha's Khalifa International Stadium||Kumar died in hospital of a cardiac arrest

An Indian man working on a Qatar World Cup stadium where rights groups say labour abuses have occurred, died of a heart attack this month in an incident the tournament's organisers said on Thursday was not due to his working conditions.

Carpenter Jagdesh Kumar, 54, fell unconscious on May 4 about half an hour after leaving Doha's Khalifa International Stadium, according to a relative. The stadium is part of a sporting complex that Qatar will unveil on Friday as its first fully refurbished 2022 World Cup venue.

Kumar died in hospital of a cardiac arrest. Three other Indians employed on World Cup sites have died of heart attacks in the last 18 months, according to a 2016 report by Qatar's World Cup organizing body, the Supreme Committee for Legacy and Delivery.

The Supreme Committee said in an emailed statement that findings showed Kumar's death was due to natural causes.

Conditions for workers from India, Nepal and Bangladesh powering a $200 billion infrastructure upgrade for the World Cup have come under scrutiny from rights groups, who say the migrants live in squalor and work without proper access to water and shelter from the sun.

The Gulf Arab Kingdom says it is implementing labour reforms and last year hired a British consulting firm to assess working conditions on stadiums in an effort to improve transparency.

"We are deeply saddened that one of our workers recently passed away while off-duty. Our sympathies are with his family at this time," said the Supreme Committee statement.

It said Qatar's recent partnering with a university to improve workers’ nutrition showed a commitment to the well-being of World Cup workers.

Qatar's government has denied claims there are higher instances of heart attacks among construction workers and does not publish independently verified statistics on worker-related injuries and fatalities.

Autopsies and post-mortems on people who die sudden and unexpected deaths are forbidden by Qatari law unless a crime is suspected.

"Workers dying suddenly from heart attacks is something we hear about often, the causes are not always clear. But we're moving now into the hottest time of the year when the risk of fatality increases," Gulf labour researcher Mustafa Qadri said on Thursday.

"When a worker dies, Qatar needs to get to the bottom of what happened. People's lives are in danger."

Dozens of construction workers from Nepal and India working on Khalifa Stadium were housed in squalid accommodation and barred from leaving the country by employers, Amnesty International said in a report in 2016.

Be an 'epic trophy wife like Melania Trump', a pastor tells women

'Just putt it out': Twitter laughs at Trump's cheat move in golf