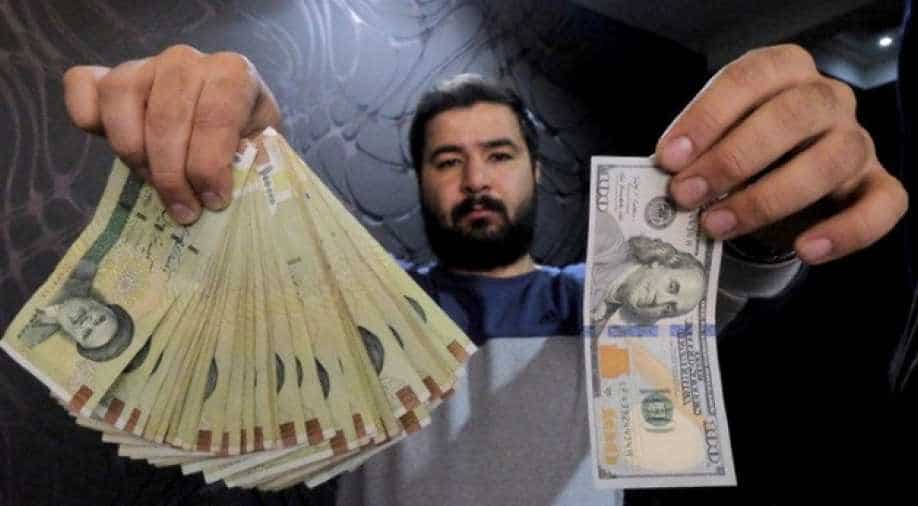 A Money changer poses for the camera with a US dollar (R) and the amount being given when converting it into Iranian rials (L), at a currency exchange shop in Tehran's business district, Iran Photograph:( Reuters )

In a sign that it will allow some flexibility in exchange rates under threatened US sanctions, Iran has lowered the official value of the rial versus the dollar for the first time since it tried to stamp out a free currency market last month.

In early April, with the rial sinking to record lows before US President Donald Trump's decision to exit the Iran nuclear deal, Tehran said it was unifying official and free-market rates for the currency at a single value of 42,000 to the dollar.

Authorities threatened anyone trading the rial at other rates with arrest, and sent police to patrol money exchange shops in big cities.

This week, however, the central bank has begun engineering a very slow decline of the rial, suggesting it will let the currency move gradually in response to supply and demand, as long as a fresh free-fall can be avoided.

The central bank set the rate at 42,050 on Monday and 42,060 on Tuesday, its website showed. Central bank chief Valiollah Seif hinted at the possibility of further falls, saying the rial could move as much as 5 or 6 percent during the fiscal year to March 20, 2019, the Financial Tribune newspaper reported.

Seif was quoted as telling a meeting of the banks' chief executives that the central bank would decide foreign exchange rates based on inflation in Iran, which is now running slightly above 8 percent.

By letting the rial depreciate, Iran may be able to boost its export sector and make it easier to attract flows of hard currency into the country, partly offsetting economic damage from the sanctions that Trump is threatening to impose.

But at the same time, authorities are desperate to prevent a sharp rial drop that could cause inflation to jump. Rising consumer prices were partly responsible for public protests that were crushed in January with the deaths of at least 25 people.

Residents of Tehran told Reuters that trade in the rial at values other than the official rate had largely halted because of the danger of arrest. But some deals were still being done by Iranians who wanted to trade or travel abroad and could not obtain enough dollars through official channels.

Tehran Prosecutor Abbas Jafari Dolatabadi said in mid-May that 180 people had been arrested over foreign exchange-related offences, according to the Iranian daily Financial Tribune.

Foreigners in Tehran said they were exchanging currency with dealers in the basements of buildings or petrol stations in order to escape notice. “It is more dangerous than buying drugs,” said one.

In early May, after Trump's decision to pull out of the Iran nuclear deal, the rial traded in the black market at record lows of about 75,000.

It has since recovered to around 64,000. An Iranian analyst in Tehran said authorities had been pumping dollars into the market in order to stabilise it but added that given heavy demand for hard currency and investors' jitters over Trump's decision, it was not clear how long a price of 64,000 could be sustained.