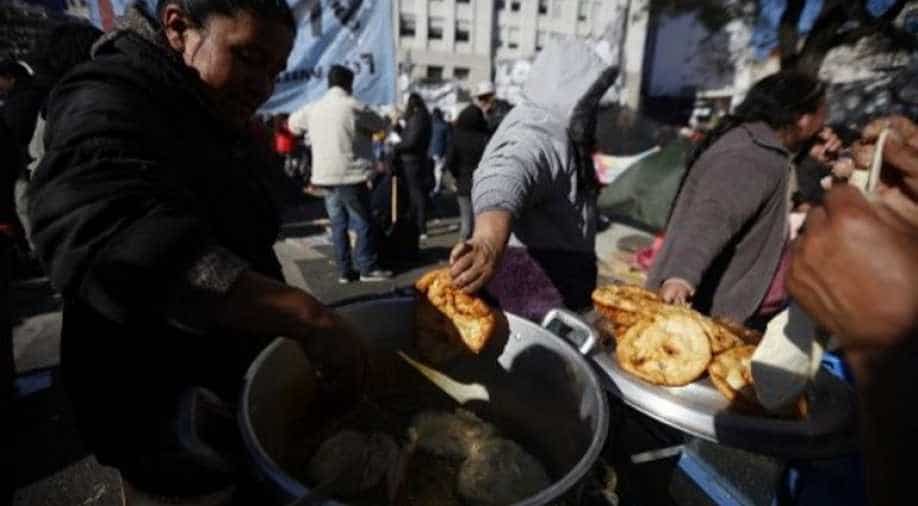 The rise in hunger and poverty creates a complex backdrop for the leaders of Latin America's no. three economy.

In the hard-up neighbourhood of Claypole on the outskirts of the Argentine capital Buenos Aires, Elena Escobar makes her way to the local Caritas Felices soup kitchen to serve food to street children who scrape by from meal to meal.

Escobar, 53, says the volunteer-run kitchen has seen a surge of kids and families seeking help over the last few months, amid a biting recession and fast-rising prices that have pushed millions of people into poverty.

"There are many children in need, many malnourished, with kids that get to dinner time and don't have any food," said Escobar. The kitchen receives over 100 children each week, up from around 20-30 when it opened its doors in April.

The rise in hunger and poverty creates a complex backdrop for the leaders of Latin America's number three economy, who are in knife-edge talks with creditors to avoid default on billions of dollars of debt amid economic and political upheaval.

Ahead of a presidential election on October 27, officials will head to Washington this month to meet with the International Monetary Fund (IMF), a major backer that struck a $57 billion funding deal with the country last year.

Those talks are likely to weigh on the current administration of President Mauricio Macri and the next one, likely led by left-leaning Peronist Alberto Fernandez, the front-runner to win the vote.

The Claypole kitchen is far from alone in witnessing rising hardship, with government data showing poverty rates jumped to 35 per cent in the first half of 2019 amid recession and steep inflation, from 27.3 per cent a year earlier.

Around 13 per cent of children and adolescents went hungry in 2018, according to data from the Pontificia Universidad Católica Argentina, and rising food prices have become a regular target of popular anger in street protests around the country.

Political leaders know something must be done, but face a complex juggling act: bolstering growth and spending to ease issues such as hunger, while cutting debt and averting a damaging default that would shut off access to global markets.

"We can't live in peace with such a scourge," left-leaning Fernandez said in a speech on Monday in reference to hunger, which he described as Argentina's "greatest shame."

Fernandez, who has been buoyed by support for populist running mate Cristina Fernandez de Kirchner, blames Macri and austerity measures agreed with the International Monetary Fund for the rise in poverty and hunger.

Both sides have said they would honour the country's debts with creditors, including the IMF, though neither has laid out a clear plan for how to do so while boosting spending at home.

Most investors expect some sort of loss.

Indeed, Moody's Investors Service anticipates holders of Argentina dollar bonds will need to write off 10 per cent to 20 per cent of their investments, while Fitch Ratings believes the government will write down local and dollar debt.

Hunger and poverty are not new in Argentina but have risen abruptly over the past two years amid a series of economic shocks that have rattled the grain-exporting nation, famed for its rich arable land and cattle.

The issues have become a lightning rod for anti-government protests and marches, with the hardships of the poor brought into sharp focus as the government has been locked in talks with creditors about repayments on around $100 billion in debts.

Driving the problem is stubborn inflation, a tumbling peso and a slump in domestic production and consumption, which have hurt spending power, incomes, and jobs.

"There is just no work," said 46-year-old Isabel Britez, a volunteer at the Los Piletones dining room in Buenos Aires, who said that was the main message she heard from people eating at the kitchen, which serves around 2,000 meals a day.

Macri, looking to revive his election hopes, has rolled out plans to bolster jobs, including tax cuts for employers. He also announced a freeze on some food prices earlier this year.

Sergio Chouza, an economist at the University of Avellaneda in Buenos Aires, said food prices have rocketed nearly 60 per cent over the past year, with basics such as dairy up as much as 90 per cent.

"That results in a deterioration of diets and pushes many people below the poverty line," he said.

Poverty is a key reason for Macri's fall from grace. His economic austerity, part of the $57 billion funding deal agreed with the IMF last year, reined in deficits but hit growth and voters' wallets.

Macri was defeated heavily in a primary election in August. Since then, he has announced lower taxes for the middle class and higher subsidies for the poor along with food aid. The Senate approved an emergency food law last month.

"Perhaps we underestimated the impact of the economic situation on the elections. (The poverty issue) affected the vote for Mauricio," Eduardo Amadeo, a Macri ally and member of Argentina's house of deputies, told Reuters.

"The reforms we launched have stabilised the economy and we have tried to reduce the impact from the devaluation in August on people's wallets," Amadeo said.

A spokesman for the Ministry of Health and Social Development listed official measures to deal with the crisis but declined to comment further on poverty rates.

In the meantime, even as soup kitchens flourish, some volunteers say meals are getting more meagre amid tight funding conditions and as food donations dry up.

"Previously, people donated some meat and chicken; now we only get noodles and rice," said Lorena Nievas, who works at the Abrazando Hogares soup kitchen in the southern Patagonian city of Puerto Madryn.

For many residents, however, there is no choice.

"I have people from the street who come in for their lunch and snacks here. It's all the food they get," she said.