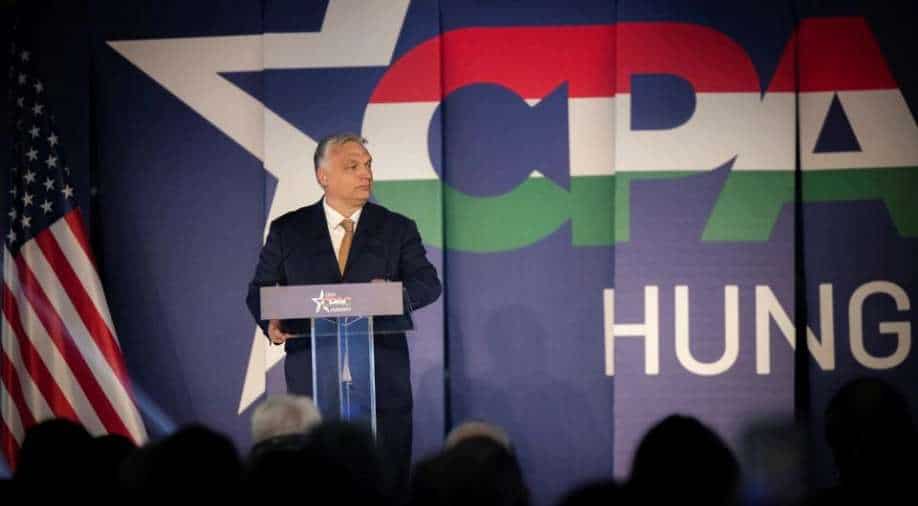 Orban, who was recently elected to a fourth term, claimed that the US media— CNN, the New York Times and others—is largely dominated by Democrats and called for shows like right-wing aligned Fox News Tucker Carlson’s to be broadcast '24/7'

Hungary's Prime Minister Viktor Orban has said that the only way to remain in power is to have your own media outlet and to tackle the “insanity of the progressive left.” His comments came during a special conference of the US Conservative Political Action Conference (CPAC) in Budapest’s Balnaconference centre.

Orbán, who was recently elected to a fourth term, laid out a 12-point blueprint to achieving and consolidating power under the slogan “God, Homeland, Family”.

He claimed that the US media— CNN, the New York Times and others—is largely dominated by “Leftist” Democrats and called for shows like right-wing aligned Fox News Tucker Carlson’s to be broadcast “24/7”.

“We have to take back the institutions in Washington and Brussels. We must find allies in one another and coordinate the movements of our troops,” Orbán said, suggesting that it was time for the right to join forces.

He told Republicans that media influence was one of the keys to success.

In Hungary, the prime minister and his allies have effective control of most media outlets in Hungary, including state TV, reported The Guardian.

“Have your own media. It’s the only way to point out the insanity of the progressive left,” he was quoted as saying.

“The problem is that the western media is adjusted to the leftist viewpoint. Those who taught reporters in universities already had progressive leftist principles.”

The Guardian claimed that journalists from reputed media outlets like the New Yorker, Vox Media, Vice News, Rolling Stone, and the Associated Press, were denied access to the event despite months of requests.

It is being claimed that the organisers either ignored their requests for accreditation or told them to “watch the event online”.

Orbán’s 12-point action plan also included points on faith, “because the absence of faith is dangerous” and the importance in countering “LGBT propaganda” which was “still new in our country but we have already destroyed it”.