'I would be dead': Britain's Rohingyas speak out 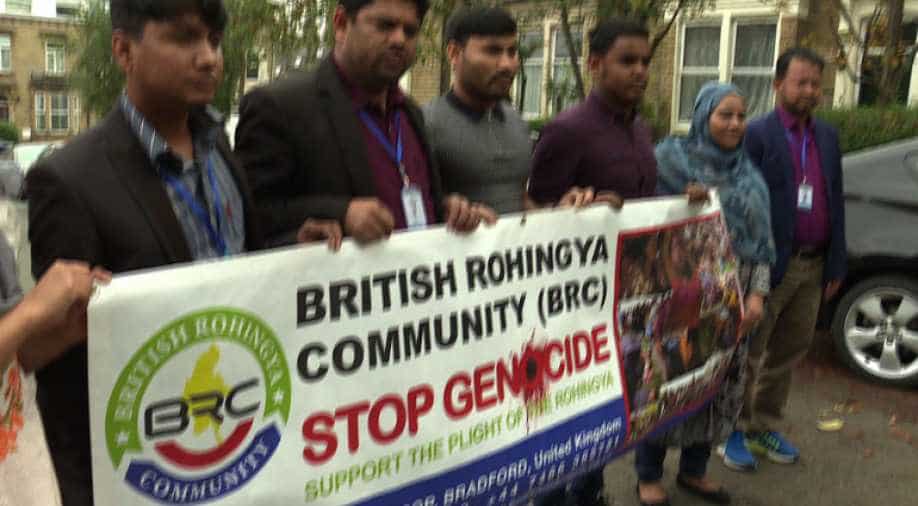 For members of Europe's biggest Rohingya community in Bradford, Northern England, the news from Myanmar brings a mix of anger, fear and haunting memories of dramatic escapes from their homeland.

Some 300 members of the Muslim minority have settled in Bradford in recent years under a refugee programme and they are desperate to draw international attention to the plight of their brethren.

"If I grew up in Myanmar I would be dead today," said Omme Kulsum Harun, a 17-year-old wrapped in a traditional long white and yellow robe with a thick grey veil covering most of her head of black hair.

Kulsum said she would like to study nursing in order to help fellow Rohingya, hundreds of thousands of whom have fled into Bangladesh in recent weeks following a crackdown by Myanmar's military.

Harun's mother Samuda saw her own aunt raped by a soldier when she was a little girl and was told by villagers that her sister suffered the same fate while the family were trying to flee Myanmar.

"Today, I don't even know if my sister is alive," the mother of seven told AFP, holding back tears.

"It makes me so sad and angry when I watch the news and see the situation in Myanmar," she said.

The contrast could not be bigger with her new life.

Harun shows off a picture of her son Ismail Mohamed, a student at Bradford University.

A former wool-making hub, Bradford is one of Britain's most diverse cities and around a quarter of the population is Muslim, according to the latest census figures.

We won't give up

In a city where Victorian-era terraced houses stand side by side with mosques and abandoned industrial plants, Nijam Uddin Mohammed said he has found freedom.

The 36-year-old arrived in 2008 after spending more than 18 years in a refugee camp in Bangladesh.

"My life started in Bradford. In the refugee camps back in Bangladesh we couldn't do what we wanted."

"If we wanted to go for a walk or see some friends in another camp we had to seek permission. It was like a mini-prison. It was not a life." he said.

During the day, the father of two young children works as an interpreter for the state-run National Health Service and at night he drives a minicab.

He also heads up the Rohingya association of Bradford, which holds meetings at the homes of local Rohingya families every Monday.

At these meetings, the Rohingyas share news about their loved ones and discuss how to put pressure on the British government to become more active.

They have started petitions, held public meetings and sent letters to politicians including Prime Minister Theresa May.

"The (Myanmar) army wants to shut us down but here in Bradford we are free and we are not afraid," Mohammed said.

"Even if they have never known their homeland, our kids will always raise their voices. We won't give up."

Their anger has been stoked further by speeches from the head of Myanmar's civilian administration, Aung San Suu Kyi, who has refused to condemn the military.

"She betrayed us. We had great expectations but instead of helping us she remained silent."

Referring to Suu Kyi's comments about reports of Rohingya suffering as "fake news", Harun said: "Is it fake news that my sister was raped by the military?"

But the deputy head of the association, Nur Huda, said it was up to Muslim countries to take the lead and follow the example of Turkey, where President Recep Tayyip Erdogan has condemned "Buddhist terrorism".

But Mohammed said: "It is not a Muslim issue. We are all human beings who share the same blood and want to live."