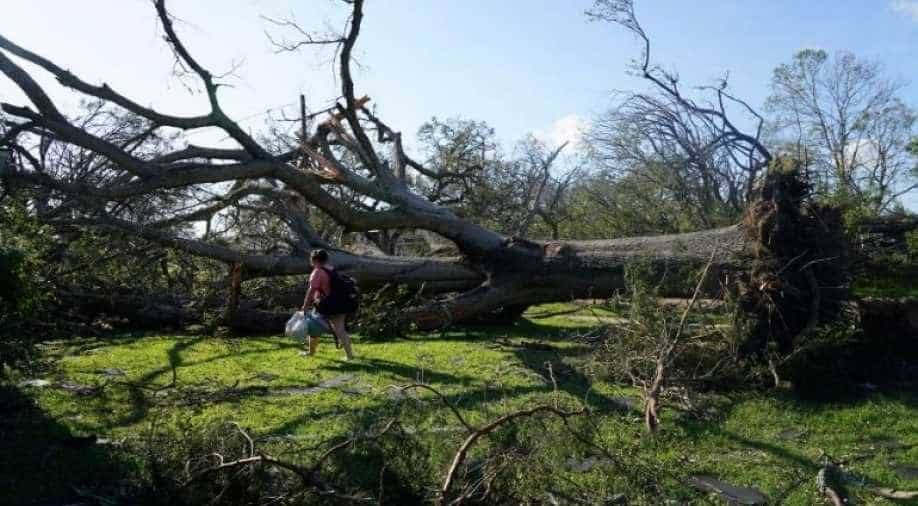 Laura's maximum sustained winds of 150 miles per hour upon landfall easily bested Hurricane Katrina, which sparked deadly levee breaches in New Orleans in 2005, and arrived with wind speeds of 125 mph.

Hurricane Laura tore through Louisiana on Thursday, killing at least 14 people and flattening buildings across a wide swatch of the state before moving into Arkansas with heavy rains.

While out of 10 people, half died from using carbon monoxide-producing portable generators indoors, the remaining deaths were either caused by trees falling on people's homes or drowning.

In Westlake, a chemical plant caught fire when hit by Laura, and the flames continued to send a chlorine-infused plume of smoke skyward nearly 24 hours after landfall.

Laura caused less mayhem than forecasts predicted, but officials said it remained a dangerous storm and that it would take days to assess the damage. At least 867,000 homes and businesses in Louisiana, Texas and Arkansas remained without power on Thursday afternoon.

"This was the most powerful storm to ever make landfall in Louisiana," Governor John Bel Edwards told a news conference. "It's continuing to cause damage and life-threatening conditions."

Laura's maximum sustained winds of 150 miles per hour upon landfall easily bested Hurricane Katrina, which sparked deadly levee breaches in New Orleans in 2005, and arrived with wind speeds of 125 mph.

The NHC said Laura's eye had crossed into southern Arkansas late Thursday afternoon and was heading to the northeast at 15 mph (24 kph). The storm could dump 7 inches of rain on portions of Arkansas, likely causing flash floods.

Laura was downgraded to a tropical depression by the NHC at 10 p.m., and the forecaster said it will move to the mid-Mississippi Valley later on Friday and then to the mid-Atlantic states on Saturday.

US President Donald Trump, who said he considered delaying his Republican presidential nomination acceptance speech over the storm, promised to visit the Gulf Coast "very shortly."

"It turned out we got a little bit lucky," Trump said. "It was very big. It was very powerful but it passed quickly."