Hundreds of thousands march across Europe for Gay Pride 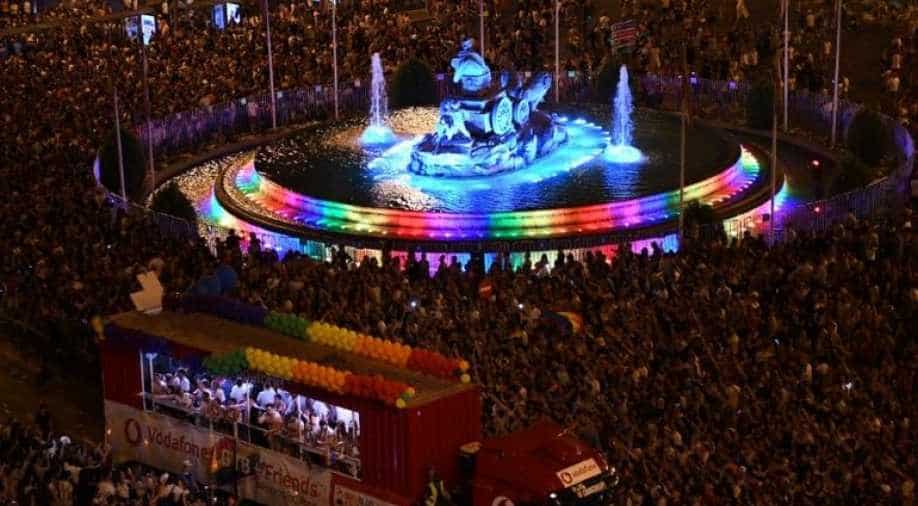 Revellers celebrate near the Cibeles fountain illuminated with the colors of the rainbow flag during the annual Pride parade in Madrid. Photograph:( AFP )

The slogan for this year's march was 'History, struggle and memory' and participants marked 50 years since the Stonewall riots in New York in 1969 which were the foundation of the gay rights movement worldwide.

Four hundred thousand people turned out on the streets of Madrid Saturday for a Gay Pride parade dedicated this year to pioneers of the LGBT+ cause, amid growing fears of fresh repression with the rise of the far-right in Europe.

The marchers converged on the Spanish capital's main Atocha train station for the start of the festivities. The 400,000 figure was later given by police.

The slogan for this year's march was "History, struggle and memory" and participants marked 50 years since the Stonewall riots in New York in 1969 which were the foundation of the gay rights movement worldwide.

Catholic Spain at the time was controlled by dictator General Francisco Franco and homosexual acts were illegal. Thousands of gay people were shipped off to rehabilitation centres or even jailed.

Homosexuality was decriminalised in 1978, three year's after Franco's death, since when Spain has become one of the most LGBT-tolerant countries in the world, authorising gay marriage and adoptions by gay couples in 2005.

"But those who are 63-years-old suffered more and those who are 73-years-old even more and I want us to recognise these people who have helped us," added Carmona, who has been attending the pride march for 30 years.

Madrid's city hall swung to the right in June after a conservative candidate was elected mayor with the support of newly-emerged far-right party Vox, in a move that has caused concern in Spain.

Vox has said that the Madrid Gay Pride Parade should be moved to a park in the suburbs and opposes public subsidies for the event.

"They do not want to understand that when we talk about LGBT rights, we are talking about human rights," said Spanish Interior Minister Fernando Grande-Marlaska, who is himself gay and took part in the march.

Activists say organised opposition against LGBT rights is growing across the continent, with populist politicians in Poland, Hungary and other European countries presenting gay rights as a threat to family values.

Resurgent homophobia made the headlines in Britain recently after a lesbian couple became the high-profile victims of a homophobic attack after refusing to kiss for a gang of youths on a London night bus.

The couple joined the annual Pride march through the heart of the British capital Saturday, which organisers said drew hundreds of thousands.

In the Hungarian capital Budapest, marchers carried rainbow banners and flew balloons at a rally that passed from parliament through the city centre.

Meanwhile, bishops in conservative, Catholic-majority Poland on Saturday denounced Swedish furniture giant Ikea for what they called "LGBT indoctrination" after an employee was sacked for refusing to take down a homophobic comment he had posted on the firm's internal website.

The bishops congratulated the man -- who had quoted passages from the Old Testament in the post -- on his "courage" in defending his faith in everyday life in an "exemplary" way.