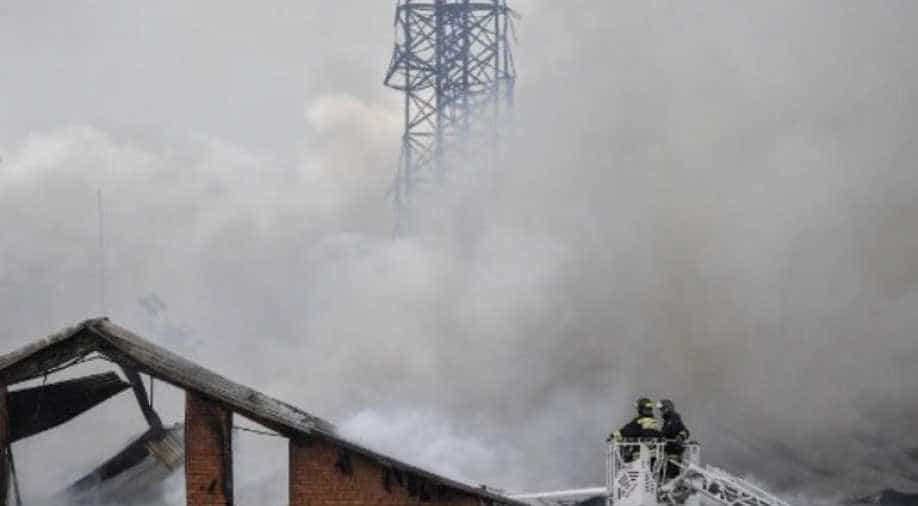 Firefighters battle a fire that broke out at a gas-fired power station just outside Moscow. Photograph:( AFP )

The smoke and flames were visible from the capital and the emergencies ministry said that the fire blazed over an area of 800 square metres (8,600 square feet).

A huge blaze broke out Thursday at a gas-fired power station just outside Moscow sending a plume of smoke and flames 50 metres (165 feet) into the sky, Russian television showed.

The emergencies ministry said that 11 people received medical treatment including five people with minor burns but no one was hospitalised. There was no risk of the fire spreading to nearby residential areas, it said.

The energy ministry said a high-pressure gas pipe supplying fuel was burning outside the power station itself.

Russian television reported that the cause of the fire "could have been an explosion".

The smoke and flames were visible from the capital and the emergencies ministry said that the fire blazed over an area of 800 square metres (8,600 square feet).

The plume of fire subsided after authorities switched off the gas supply but black smoke continued to billow as gas already released continued to burn.

The emergencies ministry said the fire would be localised shortly.

One witness, Sofiya Fesenko, watching the fire from her flat in Mytishi, said on Russian television that hot water flowed from cold taps after the fire broke out.

"We saw smoke covering half the sky," she said.

The emergency services sent in helicopters to drop water and fire-fighting trains to tackle the blaze, with more than 150 firefighters at the scene.

Moscow Mayor Sergei Sobyanin wrote on Twitter that the city was sending 50 of its fire engines to the power station.

The authorities warned drivers not to use nearby highways as the smoke hindered traffic and one highway leading to Moscow's ring road was closed entirely.

The power station was built at the end of the Soviet era and opened in 1996. Its four reactors supply to part of Moscow and the Moscow region with electricity and centralised hot water and heating.

The energy ministry said electricity supplies to the public would not be affected and the fire did not damage generation equipment at the station.

Russia is economically dependent on its vast oil and gas reserves.