How Pakistani imam used TikTok in France to propagate terror 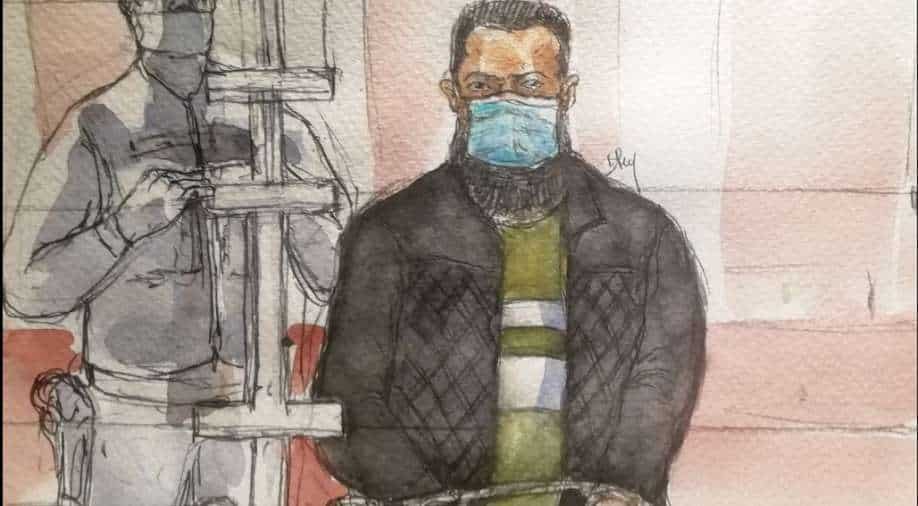 This court sketch created on November 12, 2020, shows Pakistani imam of Villiers-le-Bel, during his trial for 'apology for terrorism' in the courthouse of Pontoise, northwestern suburbs of Paris. Photograph:( AFP )

Luqman Haider, a Pakistani has been sentenced to 18 months in jail. He had arrived in France back in 2015.

After the deadly stabbing in Nice, French President Emmanuel Macron had travelled to the city appearing before the press he had said: "France is under attack".

On that day Macron did not hesitate, just like the attack in Paris he called the stabbings in Nice an act of "Islamist terrorism". Macron said France will not give in to terror.  The French president's reaction has been swift and decisive as dozens of raids have been conducted.

A mosque was shut down, a new law is being brought in to crack down on Islamist extremism. Today, France has taken another bold step, a Pakistani imam has been jailed and banned by France because he was using TikTok to propagate terror.

Luqman Haider, a Pakistani has been sentenced to 18 months in jail. He had arrived in France back in 2015. Occasionally he officiated as the imam at a mosque in Villiers-le-Bel in a commune in the northern suburbs of Paris.

Luqman Haider is a terror apologist. He put out three videos on TikTok. In the first video, he talked about the Charlie Hebdo cartoons saying "Muslim worshippers are willing to sacrifice themselves for the prophet".

In the second video, he spoke of "attacking non-Muslims and disbelievers" and "sending them to hell."

The final video shared on September 25 was a tribute for the terrorist who wounded four in a knife attack outside the former offices of Charlie Hebdo. The attack took place in September in which the terrorist was a Pakistani national.

The imam called him a "brave man". France now has zero-tolerance for such imams. A case was filed at a local court which found the imam guilty and sentenced him to 18 months in jail. Now, due to this conviction, he can no longer stay in France.

The imam will have to go back to Pakistan.

"From the moment you find him guilty on the 25th, given that he has no right to be in France with two obligations to leave the territory, it seems reasonable both for public opinion, I think, and for him to understand as well," Xavier Nogueras, lawyer for the imam, said.

The tough stand against foreign imams is not new while France has laws in place to punish such imams, the Macron government wants to implement its own rulebook. In February, before the recent terror attacks, the French president had announced new measures. Macron had taken some steps towards ending a programme that allowed foreign countries to send imams and teachers to France.

Macron had said his government wants to combat "foreign interference" in how Islam is practised and the way religious institutions are organised.

"Today, there are 300 imams who are sent to France every year. Those who arrived in 2020 will be the last cohort of such volume to come, and we will gradually stop allowing new ones and let the last cohort of imams stay until their tenures end, with a dialogue and improved conditions," Macron asserted, adding," ending what is called consular Islam is extremely important in order to be able to curb foreign influence and ensure that everyone fully abides by the laws of the republic with a common framework."

Macron wants to stop importing imams because he doesn't want foreign powers to dictate the rules of Islam in France exactly what Recep Tayyip Erdogan of Turkey and Pakistan's Prime Minister Imran Khan tried to do by whipping up passions against France through a campaign of hate against Macron.

Protests had broken out across the Islamic countries but Pakistan saw the most vicious kind of protest in Islamabad. Inside a madrasa, a teacher beheaded an effigy of Emmanuel Macron in front of children.

The imam who was reportedly punished in France used to teach children between 6 and 11 years of age. He shared similar beliefs as this teacher in Islamabad.
This is what France is fighting - extremist teachers who are radicalising young and impressionable minds.