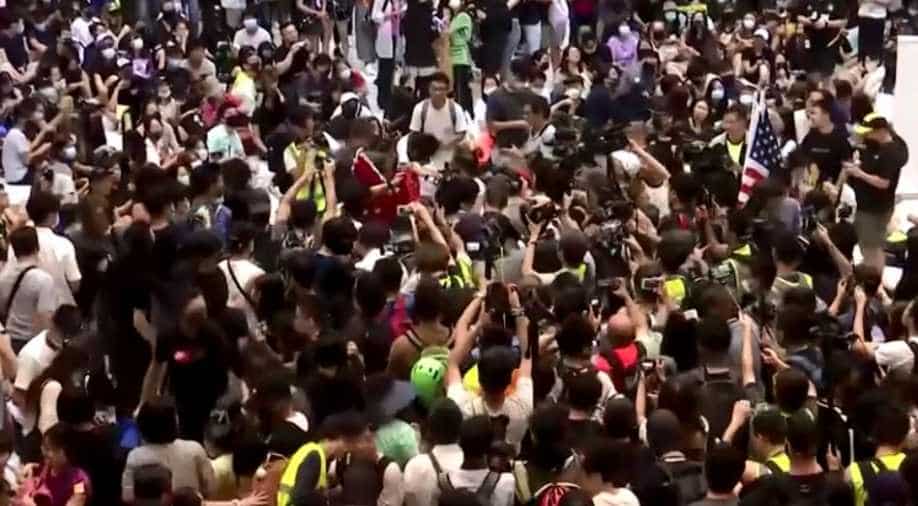 The demonstrators raised slogans such as 'Hong Kong people, keep it up', 'Fight for freedom', and 'Liberate Hong Kong'

A group of protestors in Hong Kong on Sunday trampled on the Chinese national flag and threw it into the Shing Mun river.

They also smeared paint on the flag as bystanders cheered and applauded, reported Straits Times.

The demonstrators raised slogans such as "Hong Kong people, keep it up", "Fight for freedom", and "Liberate Hong Kong".

The protests entered the 16th week with radical demonstrators vandalising the New Town Plaza shopping centre and setting fire to barricades they built on the road outside.

Two subway stations were closed in the area by the authorities.

Police hoisted a black flag to warn the protestors that they could use tear gas. The riot police, in a statement, asked the demonstrators to stop "illegal acts" and leave immediately.

Since June, Hong Kong has seen weeks of anti-government protests that began against a now-suspended extradition bill, which would have allowed criminals to be sent to mainland China for trial.

The agitations have since broadened to include calls for democracy, police accountability and the resignation of chief Carri Lam, who is backed by Beijing.

Protesters and police have clashed with both sides using force in the Asian financial hub.

China has decried the protests and threatened military action in the semi-autonomous city, with a Chinese official alleging that the demonstrations have "begun to show signs of terrorism".

Hong Kong functions under the `one country, two systems` rule and was handed back to China by Britain in 1997.