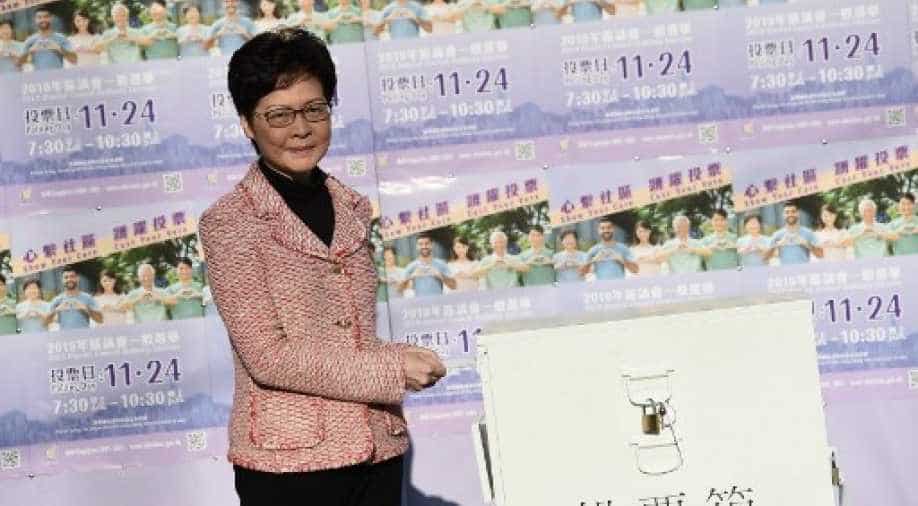 The run-up to Sunday's polls has seen a muting of major rallies and violent clashes between police and protesters, respite for a city battered by nearly six months of unprecedented political unrest.

Hong Kong voted in district council elections Sunday in a ballot the city's pro-democracy movement hoped would send a message to the Beijing-backed government.

The run-up to Sunday's polls has seen a muting of major rallies and violent clashes between police and protesters, respite for a city battered by nearly six months of unprecedented political unrest.

Protest forums have urged citizens to vote and to pause acts of disruption in case the government pushes back the polls, which opened at 7:30 am (2330 GMT Saturday) for 4.1 million registered voters.

Posts by pro-democracy users on the popular online board LiHKG urged supporters "not to jeopardise the election".

The district council polls normally stir little excitement, dominated by candidates allied to the China-backed government with a remit over everyday tasks such as rubbish collections and planning decisions.

But with protests roughing up the city, pro-democracy candidates are hoping to make a statement to Chief Executive Carrie Lam and the pro-Beijing government, which have refused to concede to the movement's demands.

The poll to choose 452 councillors across 18 districts is the closest voters in Hong Kong get to direct representation -- but turnout is usually unremarkable.

Nearly 400,000 new voters have registered, however, which is widely interpreted as a positive sign for the pro-democracy camp.

Police were deployed at polling stations and on the city streets on Sunday to prevent any disruption.

"If you create massive chaos or carry out unlawful deeds it will be difficult to hold a fair election," government Chief Secretary Matthew Cheung said Saturday.

"It's a real democratic exercise. I really want people to treasure it."

Hong Kong's political unrest started in June in opposition to an extradition bill to China.

Although the bill was eventually withdrawn, the movement snowballed into wider calls for democracy and investigations into alleged police brutality.

The district polls remain the city's freest. In contrast, members of the city's legislature are elected by a mix of the popular vote and industry groups stacked with Beijing loyalists.

The city's chief executive is chosen by a similarly pro-establishment committee.

Analysts expect pro-democracy candidates to make gains in the district councils, but to still fall well short of a majority of the 452 slots.

In a bid to get out their vote, pro-democracy groups have made "HOW TO CAST A VOTE" airdrops.

The messages urge young voters to turn up early, bring their ID and "avoid wearing black shirts and masks" -- the unofficial uniform of the protesters -- or accidentally spoiling ballots.