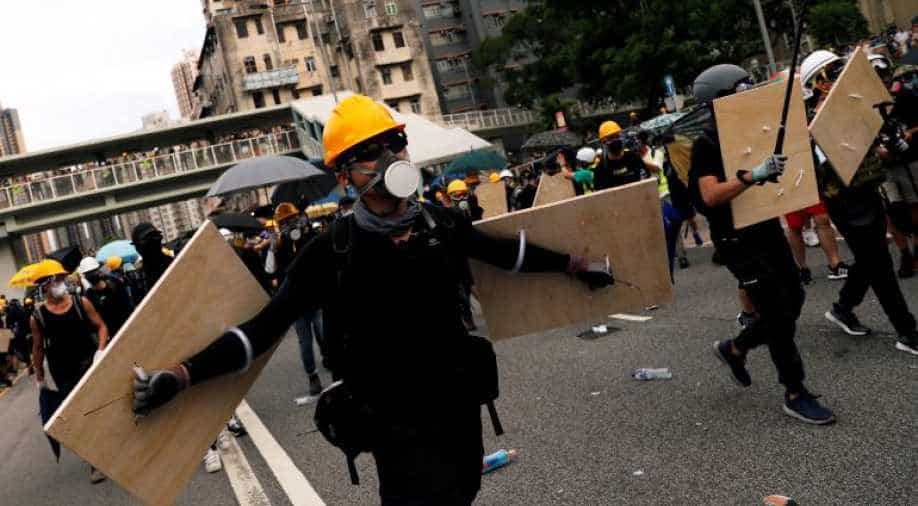 Demonstrators use shields to protect themselves during a protest against the Yuen Long attacks in Yuen Long, New Territories, Hong Kong, China July 27, 2019. Photograph:( Reuters )

The city's economy grew 0.6 per cent in the three months to June, the same rate as the first quarter but down from the 1.2 per cent recorded at the end of last year.

Beijing and Washington have already imposed duties on more than $360 billion in two-way trade, roiling global financial markets and weighing heavily on manufacturing output in both countries.

The city's economy grew 0.6 per cent in the three months to June, the same rate as the first quarter but down from the 1.2 per cent recorded at the end of last year.

"Overall economic performance was subdued," the government's statistics department said in a statement, blaming a 5.4 per cent drop in exports and "sluggish" domestic demand.

US officials met their Chinese counterparts in Shanghai on Wednesday in an attempt to resolve the yearlong trade dispute, but talks ended earlier than expected without signs of concrete progress.

The financial hub's chief executive Carrie Lam had earlier warned business leaders that subdued growth was forecast to continue through the end of the year as the trade row continued.

There was "no room for optimism for the second quarter and the entire year", Lam said Wednesday, according to a government statement.

Semi-autonomous Hong Kong has endured more than seven weeks of protests that began with a government bid to introduce a law that would have allowed extraditions to mainland China and have since evolved into a movement for deeper democratic reforms.

Analysts say that the unrest could signal further economic woes in the city.