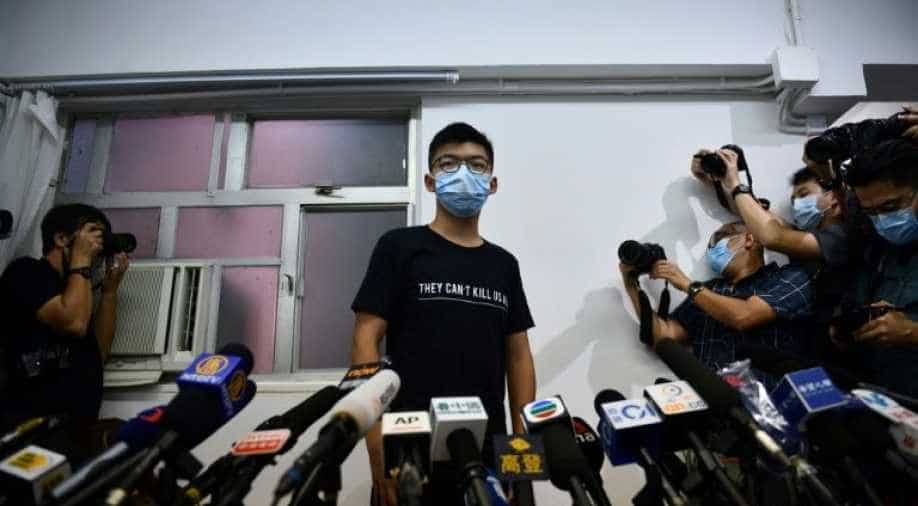 China imposed a national security law last month on Hong Kong outlawing subversion, which it warned was a "sword" hanging over the head of democracy protesters.

Hong Kong's democracy camp will continue to fight Beijing's crackdown on political freedoms, prominent dissident Joshua Wong said Friday after he and other activists were barred from standing for election.

"Our resistance will continue on and we hope the world can stand with us in the upcoming uphill battle," he told reporters.

Dressed in a black T-shirt emblazoned with the words "They can't kill us all", 23-year-old Wong slammed authorities for disqualifying some of the city's best-known democracy activists from standing in September's legislative elections.

"Beyond any doubt (this) is the most scandalous election fraud era in Hong Kong history," he said.

The disqualifications were the latest blow against the semi-autonomous city's democracy movement, which has been under sustained attack from China's Communist Party rulers.

China imposed a national security law last month on Hong Kong outlawing subversion, which it warned was a "sword" hanging over the head of democracy protesters.

On Thursday, 12 democracy activists were told they would not be allowed to stand for the partially elected legislature because of their previously stated political views.

The democracy campaigners had been hoping to win a first-ever majority in the 70-seat legislature, which is deliberately weighted to return a pro-Beijing chamber.

But there are doubts over whether the election will even go ahead.

Multiple local media outlets have reported this week that Hong Kong's government will postpone the vote because of a recent surge in coronavirus cases. But there has been no confirmation yet from authorities.

Hong Kong is a semi-autonomous city guaranteed certain freedoms and autonomy under a "One Country, Two Systems" deal agreed ahead of the 1997 handover from Britain.

But Beijing's new national security law has dramatically upended that unique status, the latest in a slew of measures that have eviscerated political freedoms in recent years.

On Wednesday, four students -- aged between 16 and 21 -- were arrested for social media posts deemed to breach the new security law, the first to be made by a new dedicated police unit.

The four were all former members of Student Localism, a pro-independence group that announced it was disbanding its Hong Kong branch the day before the security law was enacted.

Police said they were arrested on suspicion of organising and inciting secession through comments made on social media posts after the law came in.