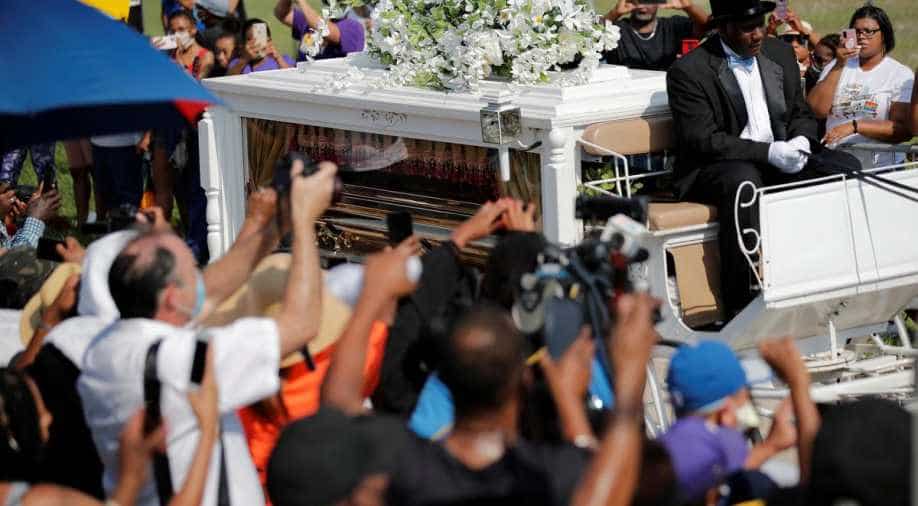 The funeral followed two weeks of protests across the United States ignited by graphic video footage of Floyd handcuffed and lying face down on a Minneapolis street while an officer kneels into the back of his neck for nearly nine minutes. The video shows Floyd gasping for air as he cries out, "Mama," and groans, "Please, I can't breathe," before falling silent and still.

George Floyd, a black man whose death under the knee of a white police officer roused worldwide protests against racial injustice, was memorialised at his funeral on Tuesday. Some 2,500 people attended the funeral, after more than 6,000 people filed past Floyd's open casket on Monday.

The funeral followed two weeks of protests across the United States ignited by graphic video footage of Floyd handcuffed and lying face down on a Minneapolis street while an officer kneels into the back of his neck for nearly nine minutes. The video shows Floyd gasping for air as he cries out, "Mama," and groans, "Please, I can't breathe," before falling silent and still.

The officer, Derek Chauvin has since been charged with second-degree murder and three other officers with aiding and abetting Floyd's May 25 death. All were dismissed from the department a day after the incident.

Floyd's dying words have become a rallying cry for hundreds of thousands of protesters around the globe who have since taken to the streets, undaunted by the coronavirus pandemic, demanding justice for Floyd and an end to mistreatment of minorities by US law enforcement.

His younger brother, Terrence Floyd, spoke about awakening in the middle of the night in recent days traumatized by the memory of seeing his older sibling calling out for their mother as he lay dying.

Civil rights activist the Rev. Al Sharpton called Floyd "an ordinary brother" who grew up in a housing project but left behind a legacy of greatness despite rejections in jobs and sports that prevented him from achieving all that he once aspired to become.

"God took the rejected stone and made him the cornerstone of a movement that is going to change the whole wide world," Sharpton said, invoking a biblical parable from the New Testament.

Sharpton said the Floyd family would lead a march on Washington being organized for August 28 to mark the 57th anniversary of the 1963 "I Have a Dream" speech given from the steps of the Lincoln Memorial by civil rights leader Martin Luther King Jr., who was assassinated in 1968.

Former Vice President Joe Biden, the presumptive Democratic presidential candidate in the November 3 election, addressed the funeral service via a video recording, lamenting that "too many black Americans wake up knowing that they could lose their life in the course of just living their life.”

“We must not turn away. We cannot leave this moment thinking we can once again turn away from racism,” he said.

Merriam-Webster to reframe definition of 'racism'

One of the most-widely used dictionaries, Merriam-Webster is set to change the definition of “racism” after a young black woman suggested the word should reflect the oppressive realities faced by many people of colour.

A graduate from Drake University in Iowa, Kennedy Mitchum contacted the dictionary makers to improve its definition of racism.

"I basically told them that they need to include that there's a systematic oppression upon a group of people," she told a local news outlet. "It's not just, 'Oh, I don't like someone.'"

Peter Sokolowski, the editorial head of Merriam-Webster told news agency AFP that Mitchum’s request will be entertained and the meaning updated.