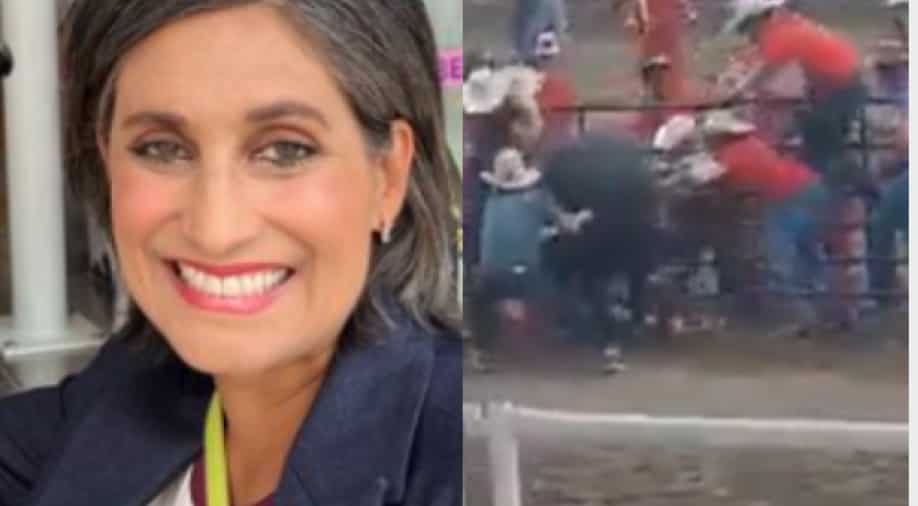 An Indo-Canadian politician named Leela Aheer showed tremendous courage at the Strathmore Stampede, 2022 when a young man was being mauled by a bull.

A rampaging bull trampling a fellow human can be a nausea-inducing sight for most, forcing them to leave the spot, but for an Indo-Canadian politician named Leela Aheer, it was a moment of heroism.

Reportedly, during the annual running of the bulls event at the Strathmore Stampede, a City-wide rodeo tradition, held since 2003, a bull went ballistic and charged at a male spectator, flinging him to the ground with its sharp pair of horns.

As the man crumbled to the ground, the rampaging bull charged toward him once again and tried to inflict further damage. However, this was the moment that Aheer, wearing her cowboy hat, jumped from the fence and went toe-to-toe with the bull.

For a good, four-five seconds, the bull refused to budge but Aheer stood there and continued to push the bull away. "It was like trying to push a car," said Aheer when quizzed about her attempt to move the bull.

Soon, Aheer's perseverance paid off as she managed to drag the young man away from the clutches of the maniac bull as the crowd applauded her feat.

If you ever wonder what kind of leader @LeelaAheer would be…

Yesterday she grabbed a bull. Jumped right in front of it. Pushed it, to save someone who was stuck under.

She did not hesitate one minute.

This is my friend. And this is who I want as a leader#ableg #abpoli pic.twitter.com/MGRVonSlMV

"I literally didn't think about it. It's a mom thing, I guess. I just jumped in front of the bull and tried to distract him." Aheer said when asked about her act of bravery.

Fortunately, both the bull and the young man were safe after the accident, even though the latter had a lot of scratches and scrapes. According to local reports, the man had scooched under the bull which meant that the animal was not able to penetrate its horns, thereby minimizing the damage, which, otherwise could have been fatal.

It is pertinent to note that Aheer is a former provincial minister. She is among a group of candidates, currently contesting for the leadership of the ruling party of Alberta i.e United Conservative Party. If Aheer wins the election, she will become the premier of Alberta. Her bravery has already made her a star on social media platforms.