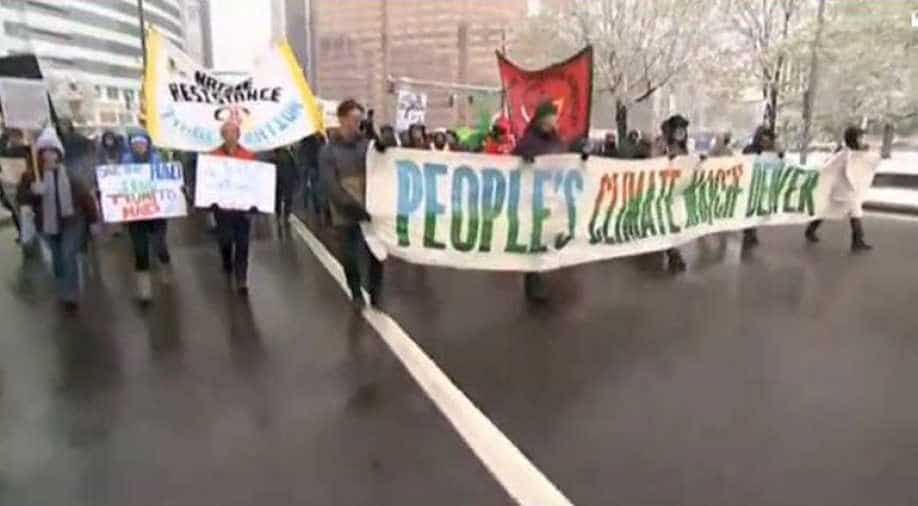 Trump was the target of many signs and banners, mocked and criticized by demonstrators of all ages.? Photograph:( Reuters )

The environmental party doubled its score in Germany from the last EU elections in 2014, knocking the Social Democrats off their traditional second place.

With double-digit scores across Europe's biggest countries including a stunning 20 per cent in Germany, the Greens bagged record gains in EU elections on Sunday with younger voters leading calls for action to halt global warming.

The environmental party doubled its score in Germany from the last EU elections in 2014, knocking the Social Democrats off their traditional second place.

In France, the Greens were number three with 12 per cent, while in Austria, Ireland and the Netherlands, they garnered double-digits.

In Britain, they were on 12.4 per cent, nearly double their previous score, and beating the ruling Conservatives into fifth place.

"To see The Green Party beating the Conservatives so far in these elections is truly amazing. Something seismic is happening in British and European politics," said Alexandra Phillips, Green Party candidate for South East England.

With the two main traditional EU blocs -- the conservative EPP and the centre-left Social Democrats projected to lose ground, the Greens could end up as kingmakers in the European Parliament.

"This is a Sunday for Future," said the Greens' lead candidate in Germany Sven Giegold, in a nod to the "Fridays for Future" school strikes by students sounding the alarm on the climate crisis.

His counterpart in France, Yannick Jadot, also hailed it as a "green wave in which we are the main players".

"Everywhere in Europe, our citizens and in particular the youngest is asking us to act with determination and that's what we'll do in France and in Europe," he said.

In Ireland, Green Party candidate Ciaran Cuffe was on course to top the first preference tally in Dublin on 23 per cent of the vote, with the Greens also seen in contention in the country's two other constituencies.

"It's a very clear message from the public that they want us to do more on climate action -- and we've got that message. That's going to require lots of changes on an individual level, community level and Govt level," he said on Twitter.

"What actually happened is the Greens came in, the counter to that. In Germany they're the second biggest party, and right across Europe and including here at home I'm so glad that green wave hit home -- we're part of that story."

The momentum for the Green surge had been building up over months as the strikes started last November by Swedish activist Greta Thunberg, 16, not only refused to lose steam but caught the imagination of youth across the world.

In a major mobilisation on Friday, tens of thousands of students rallied, with some calling on their parents to tick the box for the environment at European polls this week.

Cheering Sunday's results, a leading student activist in Germany Luisa Neubauer wrote: "The European elections show that we're not only bringing the climate crisis to the streets but also to the ballot boxes. This should give food for thought to those who have in the last month laughed at 'youth engagement'."

Under the 2015 Paris deal to limit global warming to well below two degrees Celsius above pre-industrial levels, the 28-nation EU has pledged to cut greenhouse gas emissions by at least 40 per cent by 2030, compared with 1990.

But many scientists and climate activists say Europe and all other major economies must sharply raise their ambition.

The UN Intergovernmental Panel for Climate Change warned in October that warming is currently on track towards a catastrophic 3C or 4C rise.

In Germany, the climate crisis has exposed a generational split, with adults and the elderly accused of hanging on to their polluting diesel cars while youngsters are urging change by going on school strikes.

Stunned by the Greens surge, the parties in Germany's governing coalition vowed to take on the challenge.

"The biggest challenge of the future is the intensive debate with the Greens," he said, adding that "old measures that we had before, are no longer valid".

Underlining that his party is struggling to win over young voters, he added that "we must work to be younger, cooler and more open".

Early results suggest around one in three under-30s voted Green, while only 13 per cent picked the CDU.