Global cactus traffickers are cleaning out the deserts 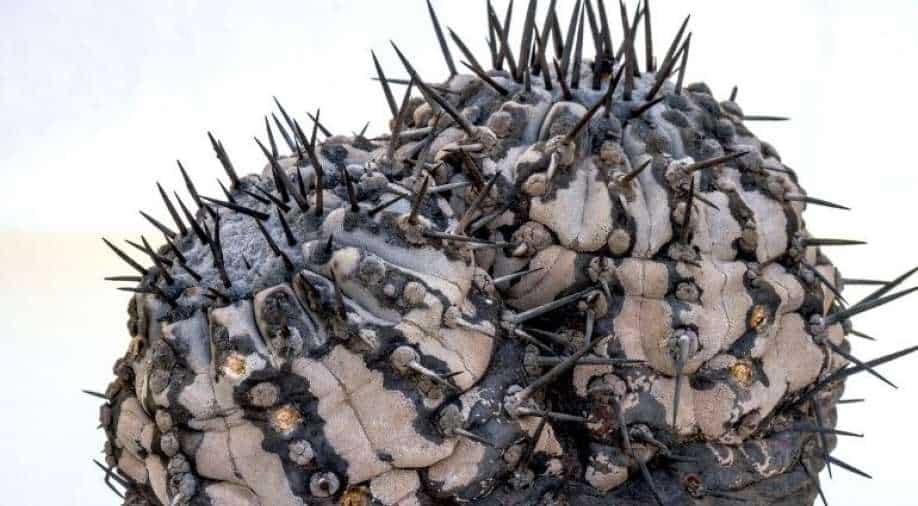 Trafficking can take a serious toll. Over 30% of the world’s nearly 1,500 cactus species are threatened with extinction

Andrea Cattabriga has seen a lot of cactuses where they didn’t belong. But he’d never seen anything like Operation Atacama, a bust carried out last year in Italy. A cactus expert and president of the Association for Biodiversity and Conservation, Cattabriga often helps the police identify the odd specimen seized from tourists or intercepted in the post.

This time, however, Cattabriga was confronted by a stunning display: more than 1,000 of some of the world’s rarest cactuses, valued at over $1.2 million on the black market.

Almost all of the protected plants had come from Chile, which does not legally export them, and some were well over a century old. The operation — which occurred in February 2020, but is being made public now because of the cactuses’ recent return to Chile — was most likely the biggest international cactus seizure in nearly three decades. It also highlights how much money traffickers may be earning from the trade.

Seeing the collected cactuses brought a profound sadness to Cattabriga.

“Here is an organism that has evolved over millions of years to be able to survive in the harshest conditions you can find on the planet, but that finishes its life in this way — just as an object to be sold,” he said.

As with the market for tiger bones, ivory, pangolin scales and rhino horn, a flourishing illegal global trade exists for plants. “Just about every plant you can probably think of is trafficked in some way,” said Eric Jumper, a special agent with the Fish and Wildlife Service. Cactuses and other succulents are among the most sought after, along with orchids and, increasingly, carnivorous species.

Trafficking can take a serious toll. Over 30% of the world’s nearly 1,500 cactus species are threatened with extinction. Unscrupulous collection is the primary driver of that decline, affecting almost half of imperiled species. Yet this realm of illegal trade is typically overlooked, a prime example of “plant blindness,” or the human tendency to broadly ignore this important branch on the tree of life.

“The basic functioning of the planet would effectively grind to a halt without plants, but people care more about animals,” said Jared Margulies, a geographer at the University of Alabama who studies plant trafficking. “A lot of plant species are not receiving the amount of attention they would be if they had eyes and faces.”

Yet the size of Operation Atacama could be a notable exception. It is also the largest known example of cactuses stolen from the wild being repatriated for reintroduction into their native habitat.

Experts also hope the case can be a turning point for how countries, collectors, conservationists and the industry deal with the thorny issue of international cactus trafficking.

“Society as a whole can no longer continue to have a naive view of this problem,” said Pablo Guerrero, a botanist at the University of Concepción in Chile.

Cactuses and other succulents are hot business today. They have become the darlings of social media, promoted by indoor plant influencers for their outlandish looks and minimal care requirements. The pandemic only increased their popularity, with shops struggling to keep some species in stock.

The average hipster’s cactus collection will include only common species propagated in nurseries. But for some specialist collectors — who tend to be middle-aged or older men — the hobby is much more serious.

“A lot of what drives the interest and passion for these plants is their uniqueness and rarity,” said Bárbara Goettsch, co-chair of the Cactus and Succulent Plant Specialist Group at the International Union for Conservation of Nature.

Many cactus species are highly localized, found, for example, only on certain steep limestone cliffs in Mexico, or a single sandy patch of less than 1 square mile on Peru’s coast. They also tend to be extremely slow-growing. Larger specimens, which are more highly sought after, can be decades or even hundreds of years old. These features make cactuses particularly sensitive to over-harvesting, but also particularly attractive to collectors interested in exclusivity.

Purchasing rare species legally, however, can be difficult to impossible. All cactuses and many other types of succulents require permits to be traded internationally, if they can be legally traded at all. Most countries also prohibit collection of some or all of these species from the wild, including the United States.

Although no estimates exist for the scope of the illegal cactus trade, many experts believe it is increasing. “It was a much smaller issue 20 years ago, but now, it is major,” said Jeff Pavlat, president of the Cactus and Succulent Society of America. “Entire populations are being stripped.”

In February 2020, Italian police, responding to a tip, visited the home of Andrea Piombetti, a well-known cactus collector and seller in Senigallia, a town on the Adriatic coast. In a makeshift greenhouse, officers discovered around 1,000 protected Chilean Copiapoa and Eriosyce species, ranging from the size of a baseball to a beach ball. Police officers seized the plants, along with Piombetti’s cellphone and passport.

It was not the first time Piombetti, who did not respond to interview requests, and who is now awaiting trial, had been accused of cactus trafficking. The police also seized a shipment of 600 Chilean cactuses from him in 2013. But the case was never prosecuted because of bureaucratic delays, and the statute of limitations passed.

“Many environmental crimes in Italy have this problem — they can’t be punished after four or five years,” said Lt. Col. Simone Cecchini, chief of the wildlife division of the local police department, who led the 2013 and 2020 investigations. “This time, our prosecutor said we’ll try to be very fast, because he wants to avoid what happened in 2013.”

Piombetti has not yet entered a plea in court.

Cattabriga and other experts carried out a number of analytical tests to confirm that the plants had not been homegrown, but instead were collected from the wild in Chile’s Atacama Desert. Cecchini and his colleagues found that Piombetti had made seven trips to Chile, most recently in December 2019, where they say he poached the cactuses in the Atacama Desert, near Pan de Azúcar National Park.

After collecting the cactuses, Cecchini’s investigation revealed that Piombetti allegedly mailed the plants to addresses in Greece and Romania, where international customs are more lax than in Italy. Because of their hardiness, cactuses can survive long journeys by post without soil, water or light.

Cecchini found many records of illegal cactus sales in Piombetti’s phone, including receipts from a Japanese company that seemed to place large monthly orders. Based on the prices quoted by text, the police calculated that the seized cactuses were worth over 1 million euros.

“We need bigger penalties in Italy for this type of environmental crime,” Cecchini said.

After the seizure, Cattabriga arranged for the plants, many of which were in very poor health, to be transferred to the Città Studi Botanical Garden of Milan for temporary care. As the investigation progressed, the question of what to do with them became more urgent.

Cactuses confiscated by Italian authorities are normally destroyed or, if they are rare species, sent to botanical gardens. But with Operation Atacama, “it was very different,” Cattabriga said. The number of cactuses was so large, and some were critically endangered species found in areas of Chile spanning just a few square miles with very specialized needs. Keeping the cactuses at the garden was a likely death sentence.

At first, there was discussion of sending the plants to other botanical gardens in Italy and broader Europe. But Cattabriga, Cecchini and Guerrero were adamant they be returned to Chile for both conservation and symbolic purposes.

Working with Goettsch and several others, they spent much of 2020 navigating Italian, Chilean and international bureaucracy to secure permission to send the plants home. “It’s the first time this has happened, so no one was really clear on how to do this,” Guerrero said.

Authorities finally agreed to the transfer in late 2020. But neither Chile nor Italy would pay the approximately $3,600 shipping cost.

Goettsch managed to secure about three-quarters of the funds from the International Union for Conservation of Nature, and the botanical garden in Milan pitched in as well. The rest was provided by Liz Vayda, owner of B. Willow, a plant shop in Baltimore that regularly donates to environmental groups.

Finally, in late April, 844 cactuses made the return journey to Chile. Around 100 others had died, and 84 stayed in Milan for study.

Cattabriga has been making daily video calls to try to ensure the plants are being properly cared for while they are in quarantine. According to Bernardo Martínez Aguilera, head of the forest inspection department at Chile’s National Forest Corporation, the final goal “is that the majority of these individuals return to their natural environment, which they never should have left.”

Vayda at B. Willow is in conversation with the International Union for Conservation of Nature about potentially establishing houseplant industry standards for certifying that greenhouses use legally sourced plants, similar to organic or fair-trade food labels.

Operation Atacama is by far the biggest bust in recent history, but there are other signs that law enforcement is beginning to take note of cactuses. Six men were sentenced to a number of penalties after recent federal convictions involving a cactus trafficking ring that poached thousands of living rocks in southwest Texas for smuggling to Europe and Asia. Additional cactus-related prosecutions have taken place in California and Arizona.

But while stronger law enforcement is welcome, a variety of experts believe prohibition, on its own, will not stop trafficking. Instead, they favor meeting demand through sustainably managed collection of seeds or cuttings of wild plants, which could be used for artificial propagation by certified greenhouses.

Sales of these legally sourced plants could help offset illegal trade. Preferably, the proceeds would go directly to communities living alongside the species, the experts say, creating incentives to protect them. The cactus and succulent trade is “big business, but the majority of that money is not centered in countries of origin,” Margulies said. “I think there should be a push to engage in this more from a social justice lens.”

Many countries’ domestic legislation prohibits these types of activities, however, as do strict international trade laws and bureaucracy. The result, Cattabriga said, is a system that “discourages the reproduction of rare plants in captivity, and has the side effect of exacerbating the illicit trade.”