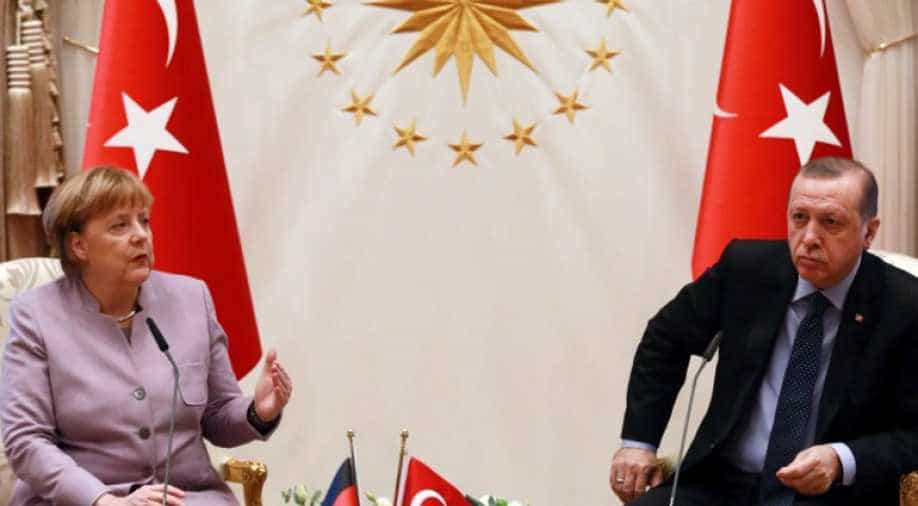 Berlin has repeatedly expressed unease over the extent of the post-coup crackdown that has seen some 43,000 people arrested, under a state of emergency that has now lasted over half a year. Photograph:(AFP)
Follow Us

Making her first visit to Turkey since July`s failed coup, Merkel held tense talks with Erdogan seeking to repair a key relationship battered by a series of crises over the last months.

But as Turkey prepares for an expected April referendum on constitutional changes that opponents fear will grant Erdogan one-man rule, the splits on key issues between the two NATO allies were still wide.

"I emphasised from my side that in this far-reaching change the separation of powers and freedom of expression must be ensured," Merkel said after talks with Erdogan at his presidential palace in Ankara.

Merkel added she had also passed on concerns over press freedom and the accreditation of German journalists in Turkey, many of whom have not received approval to work in 2017.

According to the P24 press monitoring group, 94 Turkish journalists are being held behind bars within the state of emergency declared after the coup.

But Turkish presidential sources said after the meeting that on the subject of press freedoms "German authorities sometimes make statements based on wrong, incomplete or biased information".

Merkel added that the referendum on constitutional change could be monitored by a delegation from the Organisation for Security and Cooperation in Europe (OSCE) "so that what the people want is guaranteed".

But Erdogan immediately countered it was false to maintain there would be any end to the separation of powers under the new system.

"The legislative is still there. So is the executive and the judiciary. Their dissolution... is out of the question," said the Turkish president.

Further tension came when Merkel spoke of the need to fight "Islamist terrorism", with Erdogan bridling at the expression which he said upset Muslims and was not correct as Islam is a religion of peace.

"Please let`s not use it. As long as it is used we need to stand against it," said Erdogan, looking directly at Merkel.

Berlin has repeatedly expressed unease over the extent of the post-coup crackdown that has seen some 43,000 people arrested, under a state of emergency that has now lasted over half a year.

Erdogan, meanwhile, is exasperated that Germany has not responded to requests for the extradition of hundreds of suspects linked to the coup, the outlawed Kurdistan Workers` Party (PKK) and the ultra-left.

Last week it was reported that 40 Turkish soldiers stationed at NATO bases had asked Berlin for asylum, with Turkey pressing for the bids to be rejected.

Merkel emphasised that Germany was Turkey`s partner in the fight against terror but could only act against suspects "when we have evidence and it is examined by the courts".

Merkel also wants Turkey to keep implementing a deal that has so far successfully reduced migrant flows to Europe, despite threats by Erdogan to walk away from it due to a failure to fulfil a pledge to grant Turks visa-free travel.

"The refugee issue is very important for Turkey and also the EU and Germany," she said, adding the deal was in their "mutual interest".

Opposition Republican People`s Party (CHP) leader Kemal Kilicdaroglu had expressed unease at the visit, fearing that Merkel`s presence could buttress Erdogan ahead of the referendum.

But Merkel was also to meet Kilicdaroglu and figures from the pro-Kurdish Peoples` Democratic Party (HDP) whose co-leaders are under arrest.

Opposition figures in Germany have also suggested Merkel should not be meeting Erdogan as he is presiding over the crackdown. Turkey policy is set to be a key issue when Merkel faces re-election in September.

Germany is home to some three million people of Turkish origin, the biggest population of Turks in the world outside Turkey.