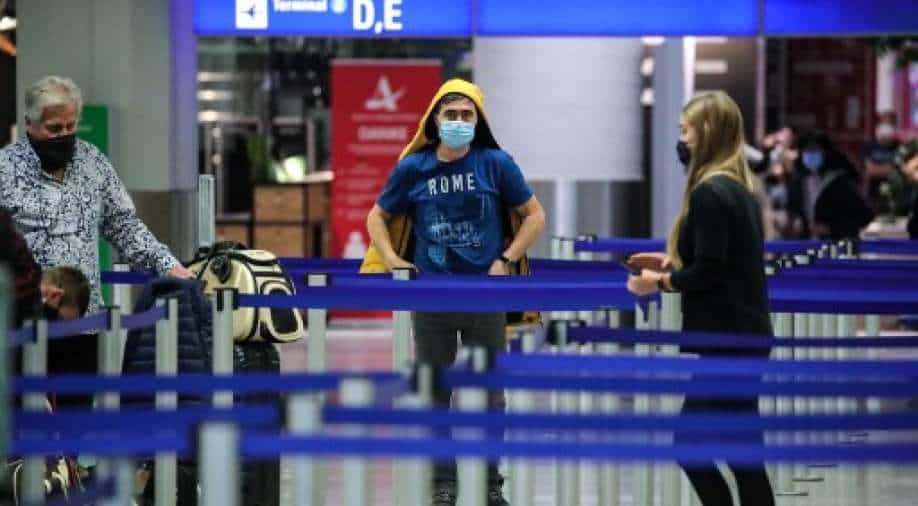 Passengers line up for check in at at Frankfurt International Airport Photograph:( AFP )

Germany's health minister had said last week that the new virus strain "has no impact on the vaccines" and was "effective" against the new variant.

As European nations clamped down its borders with England over the new coronavirus variant, Germany identified the first case of the new strain.

Baden-Wuerttemberg state's health ministry said: "It is the first known case in Germany."

Reports said the carrier was a woman who arrived at Germany's Frankfurt airport on December 20 from London. She was immediately taken to a quarantine centre after she tested positive for the virus.

"Today the virus variant B.1.1.7 was detected there," the state health ministry said. Germany has banned flights from the United Kingdom after PM Johnson last Saturday had declared that the new virus variant was "70 per cent" more transferable.

Germany's health minister had said last week that the new virus strain "has no impact on the vaccines" and was "effective" against the new variant.

The country has also banned all flight arrivals from South Africa until January 6 after the UK declared the new virus variant had emerged from the African country. Several countries including Norway, Denmark and China have banned flights from the UK.

Canada has also suspended flights from the UK until early January.

Germany had announced Germany a partial lockdown last week after a surge in cases and has cancelled its famous Christmas markets. The country recorded 30,000 new infections last week despite the lockdown in force as it continues to battle the pandemic.

The worst-hit coronavirus cases in the country at the moment are in Germany's eastern region in Bautzen and Goerlitz districts in Saxony where coronavirus rates currently stand at 600 per 100,000 people.