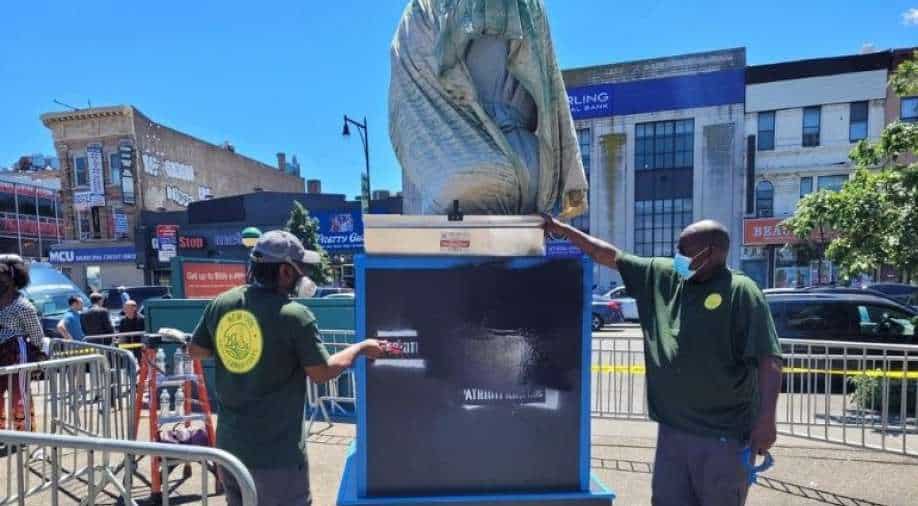 Amid the celebration after the sentencing of ex-police officer Derek Chauvin to 22 ½ years in prison for the murder of George Floyd, comes a piece of grim news.

In New York, less than a week after its unveiling, a statue of Floyd was found defaced and marked with a neo-Nazi group’s name.

The statue was found covered in paint, with an inscription of the American far-right cell “Patriot Front”, a group that is defined as a “white nationalist hate group’ by the Southern Poverty Law Center.

The group is also believed to be behind another similar defacing in New Jersey. There, a bronze statue of Floyd in front of the town hall of Newark was covered in paint.

A video released by authorities showed four individuals participating in this vandalism. One of them can be seen holding a paint spray can.

New York police said that they are investigating the attack on the monument.

New York State Governor Andrew Cuomo tweeted, "I'm going to be absolutely clear with the neo-Nazi group that did this: get out of our state," adding that special agents from the Hate Crimes Task Force would offer to help the investigation.

I am directing the @nyspolice Hate Crimes Task Force to assist in the investigation of the defacing of the George Floyd monument in Brooklyn.

To the group of neo-Nazis who did this, I want to be absolutely clear: get the hell out of our state. pic.twitter.com/Mjkpn4lVLZ

In a Twitter post, New York Mayor Bill de Blasio commented "We will bring these cowards to justice".

The City Cleanup Corps is repairing the statue right now and a hate crime investigation is underway. We will bring these cowards to justice. pic.twitter.com/mTwzwIyG4z

This six-foot wooden statue was made by artist Chris Carnabuci and was inaugurated as a part of Juneteenth (June 19th) celebrations in the presence of George Floyd’s brother, Terrence Floyd.