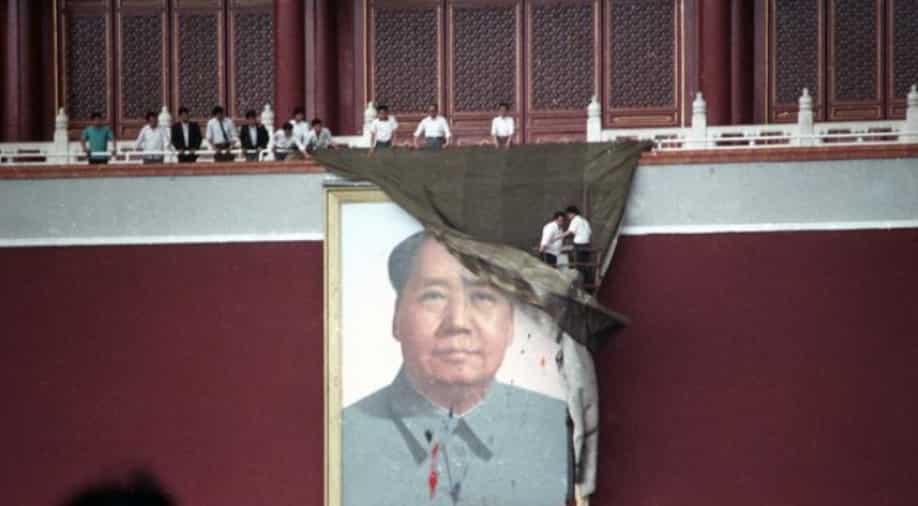 Workmen try to drape the portrait of Mao Zedong, in Tiananmen Square, May 23, 1989. Photograph:( Reuters )

China has never provided a full accounting of the 1989 violence. The death toll given by officials days later was about 300, most of them soldiers, but rights groups and witnesses say the death toll could have run into the thousands. Here are some landmark dates leading up to the demonstrations, the crackdown that followed, and the subsequent re-emergence of China:

Chinese troops opened fire on their own people -- making the event a taboo topic of discussion in mainland China ever since.

Though it won't be officially commemorated by the ruling Communist Party or government, Hong Kong plans to -- by lighting candles across the city on Thursday, circumventing a ban on the usual public gathering amid the coronavirus pandemic.

The anniversary strikes an especially sensitive nerve in the semi-autonomous city this year after Beijing's move last month to impose national security legislation in Hong Kong, which critics fear will crush freedoms in the financial hub.

Here are some landmark dates leading up to the demonstrations, the crackdown that followed, and the subsequent re-emergence of China:

April 15 -- A leading reformer and former Communist Party chief Hu Yaobang, dies. His death acts as a catalyst for unhappiness with the slow pace of reform, as well as corruption and income inequality

April 17 -- Protests begin at Tiananmen Square, with students calling for democracy and reform. Crowds of up to 100,000 gather, despite official warnings

April 22 -- Some 50,000 students gather outside the Great Hall of the People as Hu's memorial service is held. Three students attempt to deliver a petition to the government, outlining their demands, but are ignored. Rioting and looting take place in Xian and Changsha

April 27 -- Around 50,000 students defy authorities and march to Tiananmen. Supporting crowds number up to one million

May 2 -- In Shanghai, 10,000 protesters march on city government headquarters

May 4 -- Further mass protests coinciding with the anniversary of the May 4 Movement of 1919, which was another student and intellectual-led movement for reform. Protests coincide with meeting of Asian Development Bank in Great Hall of the People. Students march in Shanghai and nine other cities

May 15-18 -- To China's embarrassment, protests prevent traditional welcome ceremony outside the Great Hall of the People for the state visit of reformist Soviet leader Mikhail Gorbachev. Students welcome Gorbachev as "The Ambassador of Democracy"

May 19 -- Party chief Zhao Ziyang visits students on Tiananmen Square, accompanied by the hardline then-premier Li Peng and future premier Wen Jiabao. Zhao pleads with the students protesters to leave, but is ignored. It is the last time Zhao is seen in public. He is later purged

May 20 -- Li declares martial law in parts of Beijing. Reviled by many to this day as the "Butcher of Beijing", Li remained premier until 1998

May 30 -- Students unveil the 10-metre (33 ft) high "Goddess of Democracy", modelled on the Statue of Liberty, in Tiananmen Square

June 3 -- Citizens repel a charge towards Tiananmen by thousands of soldiers. Tear gas and bullets used in running clashes a few hundred metres (yards) from the square. Authorities warn protesters that troops and police have "right to use all methods"

June 4 -- In the early hours of the morning tanks and armoured personnel carriers begin their attack on the square itself, clearing it by dawn. About four hours later, troops fire on unarmed civilians regrouping at the edge of the square

June 5 -- An unidentified Chinese man stands in front of a tank convoy leaving Tiananmen Square. The image spreads around the world as a symbol of defiance against the crackdown

June 6 -- Chinese State Council spokesman Yuan Mu says on television that the known death toll was about 300, most of them soldiers with only 23 students confirmed killed. China has never provided a full death toll, but rights groups and witnesses say the figure could run into the thousands

1994: China devalues the yuan by 33% overnight as part of reforms to embrace a "socialist market economy"

1997: Deng dies in February. British colony of Hong Kong reverts to Chinese rule in July. President Jiang Zemin visits the United States later that year, the first trip by a Chinese head of state in more than a decade and breaking China out of diplomatic isolation in the post-Tiananmen period.

Asian financial crisis breaks out and China wins wide praise for keeping the yuan stable despite pressure to devalue.

1998: US President Bill Clinton visits China. Zhu Rongji takes over as premier, reforming lumbering state-owned enterprises and laying off millions, cracking down on smuggling and revamping the health care system

2001: China joins the World Trade Organisation, paving the way for the country to become a global manufacturing powerhouse

2005: Zhao Ziyang, who was ousted as Party chief in 1989 for opposing the Tiananmen crackdown, dies after 15 years under house arrest. His opposition to the Party's decision to send in the army had made him a symbol for activists and reformers

2008: Beijing hosts Summer Olympic Games in August, illustrating China's arrival on world stage. But the year is marred by devastating earthquake in Sichuan province in May and riots across Tibetan parts of the country in March.

China unveils a 4 trillion yuan ($562.77 billion)stimulus package to combat the global financial crisis, saddling the economy with a pile of debt and leading to a comeback of state firms at the expense of private firms.

2010: Former Tiananmen student leader and democracy activist Liu Xiaobo is the first Chinese person awarded the Nobel Peace Prize, having been jailed for subversion the year before. He would die while still detained but on medical parole in 2017.

2018: China's largely rubber-stamp parliament votes to amend the state constitution to remove term limits for the president, meaning Xi can stay in power for life if he so wishes

2019: China's trade war with United States that began in 2018 escalates, hurting the world's second-largest economy that is already growing at the slowest pace since 1990

2020: The novel coronavirus spreads in China and is soon all over the globe. Tensions increase with the United States over Hong Kong, press freedom, and Beijing's handling of the epidemic. Beijing moves to impose national security legislation on Hong Kong.

June 5 -- Hong Kong plans to commemorate the bloody 1989 crackdown by lighting candles across the city, circumventing a ban on the usual public gathering amid the coronavirus pandemic.

Democratically-ruled and Chinese-claimed Taiwan, where commemorations are planned throughout the day, called on China on Wednesday to apologise, a call dismissed by China's foreign ministry as "nonsense."