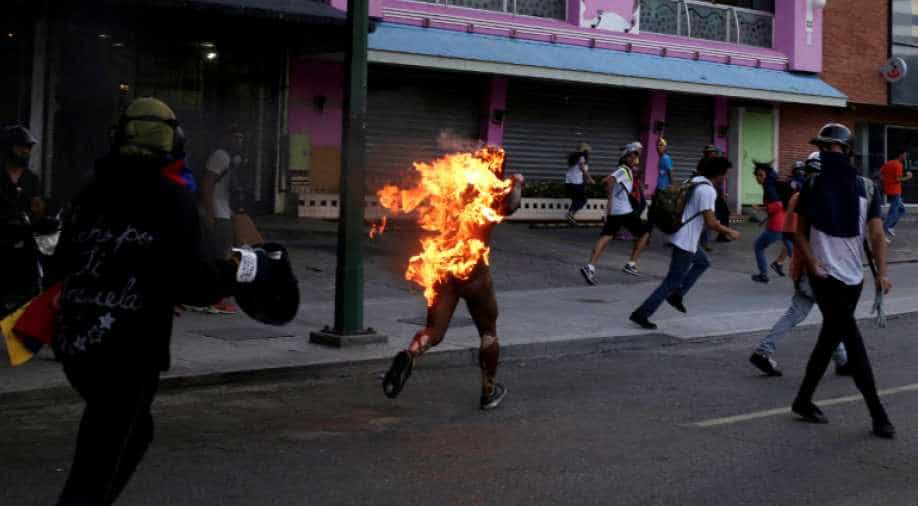 A man who was set on fire by people accusing him of stealing during a rally against Venezuela's President Nicolas Maduro runs amidst opposition supporters in Caracas, Venezuela, May 20, 2017. Photograph:( Reuters )

There have been multiple riots across the country||The opposition is demanding elections to remove Maduro from power, blaming him for an economic crisis that has caused shortages of food, medicine and basic supplies||Maduro accuses the opposition of plotting a coup against him with US backing

Doctors rallied in Venezuela Monday in the latest street protests against President Nicolas Maduro, as a young man lay in hospital after being set on fire by an angry crowd.

Three people were killed in violent riots in late president Hugo Chavez's home state of Barinas, bringing the death toll to 51 as the unrest entered its eighth week, the public prosecution service said.

One of the victims was a 19-year-old man who died from gunshot wounds. An AFP reporter saw demonstrators burn a government office and a police car in the western town of Barinas in the state of the same name.

Fresh clashes also broke out between protesters and police on the outskirts of Caracas, where demonstrators blocked streets with barricades.

After marches by various civil groups, it was the turn of the Venezuelan Medical Federation to vent its frustrations in the streets.

About 20,000 thousand of its sympathisers marched towards the health ministry in Caracas. Police fired tear gas to drive them back, in scenes that have become familiar after weeks of unrest.

"The country is verging on catastrophe. The health system is a disaster," said Fernando Gudayol, a 50-year-old surgeon.

"One is always afraid to come out, but we will carry on doing it until there is a change."

The opposition is demanding elections to remove Maduro from power. They blame him for an economic crisis that has caused shortages of food, medicine and basic supplies.

"A simple infection can turn into something serious for a lack of antibiotics and any kind of supplies, and for a lack of maintenance of the equipment," said Eliecer Melear, a 41-year-old urologist.

Maduro's supporters staged a counter-demonstration near the presidential palace.

"What lack of medicine?" asked medical student Rangel Vegas, 31. "We are in the streets and in the clinics giving a response to what communities need."

Maduro's government repeated its claim that it was targeted by an international conspiracy. The government side "is the victim of political and ideological persecution in Venezuela and internationally," Foreign Minister Delcy Rodriguez told a news conference.

Maduro earlier called for a further "march for peace" on Tuesday.

Maduro accuses the opposition of plotting a coup against him with US backing. He says the crisis is a capitalist conspiracy.

The government and opposition accuse each other of sending armed groups to sow violence in the demonstrations.

On Sunday, a man was beaten, doused in petrol and set alight during a protest in the capital Caracas.

The government alleged he was attacked for being a Maduro supporter. Speaking on television, the president identified the man as Orlando Figuera, 21.

He said Figuera was hospitalised with first- and second-degree burns over half of his body and six knife wounds.

Elected in 2013, Maduro has resisted opposition efforts to remove him since January 2016.

He has said there will be presidential elections as scheduled next year, but not before.

Instead, he has angered the opposition by seeking constitutional reforms, which his rivals say aim to strengthen his grip on power.

Maduro retains the public backing of the military and control of most state institutions.

But he added: "It is hard to keep protest waves going. People have to work, study, eat and live their lives. The opposition needs to think about how to consolidate their gains. Otherwise, this movement too could lose steam."