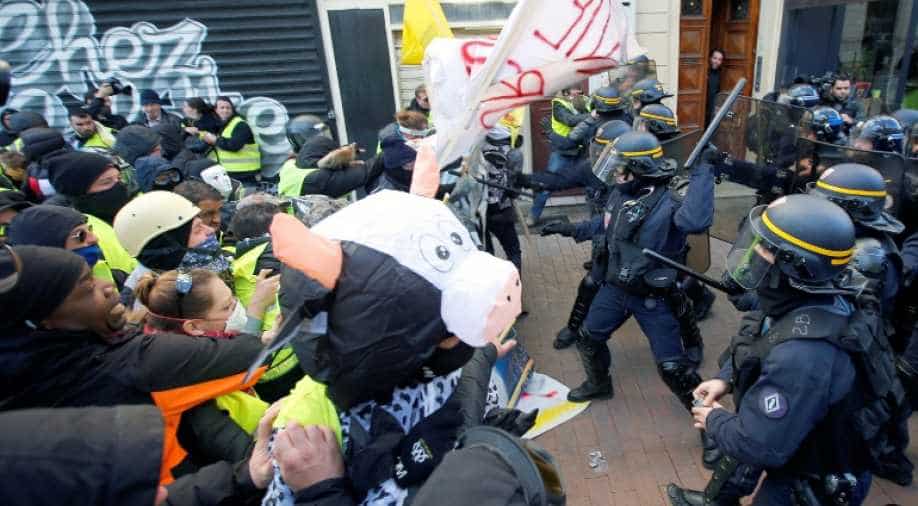 Protesters wearing yellow vests clash with police during a demonstration of the 'yellow vests' movement in Marseille. Photograph:( Reuters )

Christophe Dettinger, 37, is a former France light-heavyweight champion. He was caught on camera on January 5 throwing a flurry of punches at an officer.

A former boxer who became a hero to some of France's "yellow vest" protesters after being filmed punching police officers during a demonstration in Paris goes on trial Wednesday on charges that carry up to seven years in jail.

Christophe Dettinger, 37, an ex-national light-heavyweight champion, was caught on camera on January 5 throwing a flurry of punches at an officer during clashes on a footbridge over the river Seine near parliament.

The footage, which was played repeatedly on TV and social media, also showed the 1.9-meter (6.3-foot) tall Dettinger kicking another officer on the ground.

The scene caused widespread outrage, with the government describing it as a prime example of the violence that has characterised the yellow vest demonstrations since they began in November.

One of the injured officers was treated in hospital for his injuries.

Dettinger, nicknamed "The Gypsy From Massy" during his days in the ring in reference to the town south of Paris where he began his career, turned himself in two days after the incident and has been in custody ever since.

Some French people have hailed him as a hero for taking on the police.

The yellow vest movement — so-named after the luminous safety vests worn by the activists — started over fuel tax hikes and quickly grew into a broader rebellion against the economic policies and leadership style of President Emmanuel Macron.

The number of people taking part in weekly protests has fallen significantly since the start of the year, but the heat has still not gone out of the movement, with the demonstrations regularly ending in rioting.

Six people were arrested on Tuesday suspicion of having used a forklift truck to ram open the doors leading to the office of government spokesman Benjamin Griveaux, on the same day as Dettinger's attack on the police.

On Friday, a leading figure of the yellow vest movement, 33-year-old truck driver Eric Drouet, will also be tried on charges of illegally organising a demonstration in Paris.

He faces up to six months in prison if convicted.

Since the start of the protests, 1,796 people have been sentenced in court, mainly for the destruction of public property and attacks on the police.

In a video posted on YouTube a day after his outburst, Dettinger described himself as an "ordinary citizen" acting out of anger with what he called the repressive tactics of the police.

At his first court appearance the married father-of-three, who has no previous convictions, apologised for his actions.

His case has elicited widespread sympathy among the yellow vests and their supporters, with an online fundraising drive bringing in more than 117,000 euros ($134,000) towards his legal costs before being shut down.

In another sign of support, street artists painted two giant black-and-white portraits of the boxer, one showing him punching the policemen, on a wall in northern Paris.

Some yellow vests argue that Dettinger's punches were just retribution for the police, who have been criticised for their liberal use of rubber bullets and stun grenades which have left dozens seriously injured.

But the police have also drawn sympathy, with a fund for the injured officers garnering over a million euros in donations.

Around 10,000 people taking part in a rally in Paris last month to condemn "yellow vest" violence, during which the police were applauded.