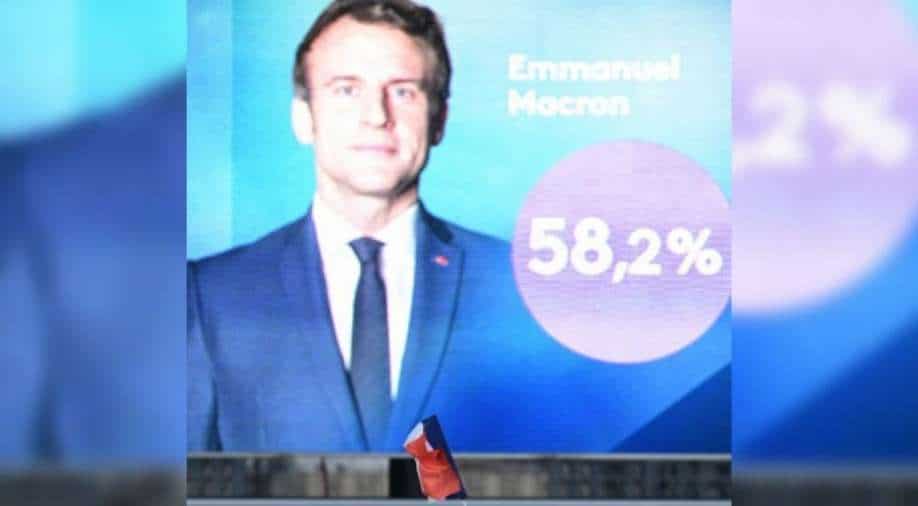 A supporter reacts after the victory of French President and La Republique en Marche (LREM) party candidate for re-election Emmanuel Macron in France's presidential election, at the Champ de Mars, in Paris, on April 24, 2022. Photograph:( AFP )

The outcome, expected to be confirmed by official results overnight, will cause immense relief in Europe after fears a Le Pen presidency would leave the continent rudderless following Brexit and the departure of German chancellor Angela Merkel

Macron was set to win 57.0-58.5 per cent of the vote compared with Le Pen on 41.5-43.0 per cent, according to projections by polling firms for French television channels based on a sample of the vote count.

The result is narrower than their second-round clash in 2017 when the same two candidates met in the run-off and Macron polled over 66 per cent of the vote.

The relatively comfortable margin of victory will nonetheless give Macron some confidence as he heads into a second five-year mandate, but the election also represents the closest the far-right has ever come to winning power in France.

A victory by Le Pen, accused by opponents of having cosy ties with Russian President Vladimir Putin, would have sent shockwaves around the world comparable to the 2016 polls that led to Brexit in Britain and Donald Trump's election in the United States.

The outcome, expected to be confirmed by official results overnight, will cause immense relief in Europe after fears a Le Pen presidency would leave the continent rudderless following Brexit and the departure of German chancellor Angela Merkel.

Left-leaning EU leaders including German Chancellor Olaf Scholz had pleaded with France in the run-up to the vote to choose Macron over his rival, in an unusual intervention published in Le Monde newspaper.

Macron will be the first French president to win re-election since Jacques Chirac in 2002 after his predecessors Nicolas Sarkozy and Francois Hollande left office after only one term.

The 44-year-old is to make a victory speech on the Champ de Mars in central Paris at the foot of the Eiffel Tower where flag-waving supporters erupted in joy when the projections appeared at 8:00 pm local time (1800 GMT).

Macron will be hoping for a less complicated second term that will allow him to implement his vision of more pro-business reform and tighter EU integration after a first term shadowed by protests, then the pandemic and finally Russia's invasion of Ukraine.

But he will have to win over those who backed his opponents and the millions of French who did not bother to vote.

On the basis of the official figures, polling organisations estimated that the abstention rate was on course for 28 percent which, if confirmed, would be the highest in any presidential election second-round run-off since 1969.

The outcome of the first round on April 10 had left Macron, 44, in a solid but not unassailable position to retain the presidency.

Convincing supporters of the hard-left third-placed candidate Jean-Luc Melenchon to hold their noses and vote for the former investment banker was a key priority for Macron in the second phase of the campaign.

Macron will also need to ensure his party finds strong grassroots support to keep control of a parliamentary majority in legislative elections that come hot on the heels of the presidential ballot in June and avoid any awkward "cohabitation" with a premier who does not share his political views.

High on his to-do-list is pension reform including a raising of the French retirement age which Macron has argued is essential for the budget but is likely to run into strong opposition and protests.

He will also have to rapidly return from the campaign trail to dealing with the Russian onslaught against Ukraine, with pressure on France to step up supplies of weapons to Kyiv and signs President Vladimir Putin is losing interest in any diplomacy.

For Le Pen, her third defeat in presidential polls will be a bitter pill to swallow after she ploughed years of effort into making herself electable and distancing her party from the legacy of its founder, her father Jean-Marie Le Pen.

Critics insisted her party never stopped being extreme-right and racist while Macron repeatedly pointed to her plan to ban the wearing of the Muslim headscarf in public if elected.

She has suggested this could be her last campaign and speculation is now expected to mount about the future of her party and the French far-right, which splintered during the campaign.

When Jean-Marie Le Pen reached the second round in 2002, the result stunned France and he won less than 18 percent in the subsequent run-off against Chirac.

WATCH | The battle for French Presidency: French line-up at polling booths to elect the next President