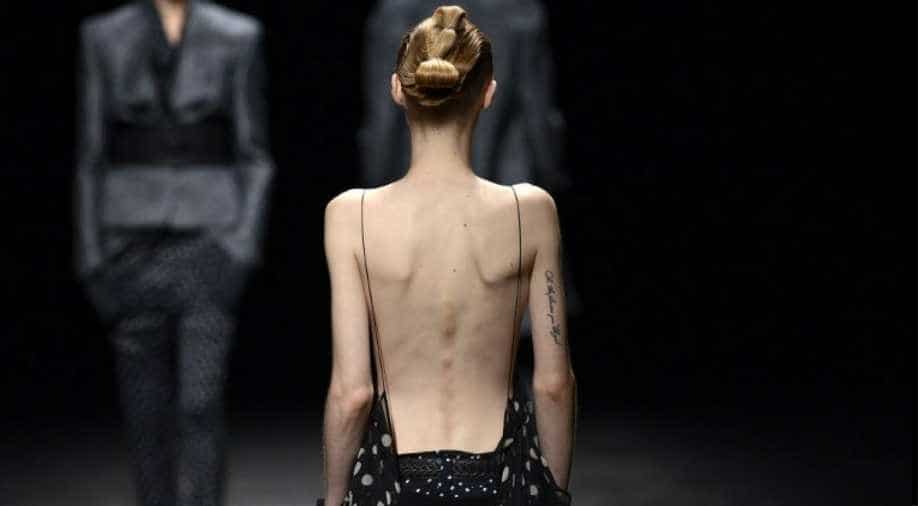 The ban is meant to help ensure the well-being of models. Photograph:( AFP )

New York Fashion Week starts tomorrow and a group of French-owned fashion labels has pledged to ban ultra-thin models from their advertising and catwalk shows. This comes as a response to criticism that the industry encourages anorexia.

Fashion labels spanning from Christian Dior to Saint Laurent have pledged to fight against this image and spread the message of "love your own skin" "to ensure the well-being of models".

In a statement to AFP, François-Henri Pinault, Kering group chairman said, "Respecting the dignity of all women has always been both a personal commitment and a priority for Kering as a group.

"We hope to inspire the entire industry to follow suit, thus making a real difference in the working conditions of fashion models industry-wide."

Along with banning of ultra-thin models, the group plans on unveiling a charter that will outlaw the hiring of girls under the age of 16 for adult shoots or events.

Year 2017 has witnessed some of the most noteworthy measures taken up by the industry bigwigs to keep a check on the health of models who stretch far too much while making their mark in the industry.

In May, a French law was introduced that now requires models to present a doctor's certificate attesting to their good health while applying for a job.

This is a scathing attack on the idea of desirable thinness and unattainable beauty ideals, that models have had to strive to achieve. The two French groups now want to go beyond these unsaid dictated norms and want to use female models who are size 34 or over according to the French system and men sized 44 or more.

In France, size 32 corresponds to XXS or size 6 in Britain and size 0 in the US.

The charter includes other measures such as banning the serving of alcohol to models under 18 and ensuring they have a guardian or chaperone present at all times.

Antoine Arnault, a board member of LVMH and son of owner Bernard Arnault, in a statement, said, "As the leader in the luxury sector, we believe it is our role to be at the forefront of this initiative.

"We have the responsibility of building new standards for fashion and we hope to be followed by other players in our sector."

LVMH or LVMH Moët Hennessy Louis Vuitton SE is a multinational luxury goods conglomerate that owns classic French brands such as Louis Vuitton, Christian Dior and Givenchy as well as other high-end European names including Fendi and Marc Jacobs.