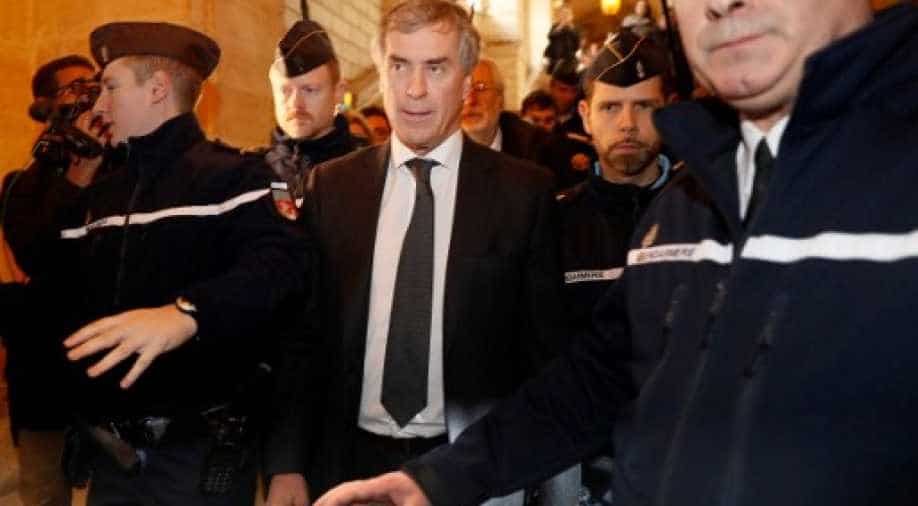 Former French budget minister Jerome Cahuzac, whose brief in government was to crack down on tax dodgers, was sentenced to three years in prison on Thursday for tax fraud and money laundering.

Cahuzac's ex-wife Patricia Menard was given a two-year prison sentence for her role in stashing millions of euros abroad from the couple's lucrative hair transplant business.

The Paris court also gave Francois Reyl, a Swiss banker, a one-year suspended prison sentence and fined him 375,000 euros ($405,000) for assisting the couple.

His bank, Reyl, was fined 1.87 million euros for money laundering.

Cahuzac, a 64-year-old plastic surgeon, had admitted in evidence that he hid funds offshore to maintain his family's standard of living -- which included buying apartments for his children in London and Paris and paying for holidays in Mauritius.

The scandal was the first of a series that tarnished Socialist President Francois Hollande's government and prompted him to order his ministers to disclose their personal wealth, a first in France, where the wealth of public officials had long been considered a private matter.

The story of the fraud, which took place between 1992 and 2013, reads like a cross between a cheap airport novel and an international financial crime manual.

In one episode, Cahuzac, using the codename "Birdie", was said to have received two cash payments of 10,000 euros on the streets of Paris.

The couple used a Royal Bank of Scotland account in the Isle of Man, an offshore financial centre in the Irish Sea, to channel cheques from English clients of their business.

Cahuzac initially denied the allegations and sued the Mediapart news website that broke the story in 2012.

Footage of the minister lying to parliament was repeated in an endless loop on French media after he finally confessed in April 2013, "consumed by remorse", to having a Swiss bank account.

By the end of the trial, Cahuzac had repeatedly admitted his "inexcusable wrongdoing".

As the couple's marriage began to falter, Menard also opened an account in Switzerland.

Menard's lawyer Sebastien Schapira told the trial the money was "that of fraud, but initially it was that of her work, earned day after day, hour after hour, hair by hair".

He described Menard as "naive" and an unwitting accomplice who was "swept up" in the fraud before confessing in December 2013.

She testified that the couple had become locked in a "spiral" of wrongdoing.

"I'm extremely ashamed of having done all that," she said.