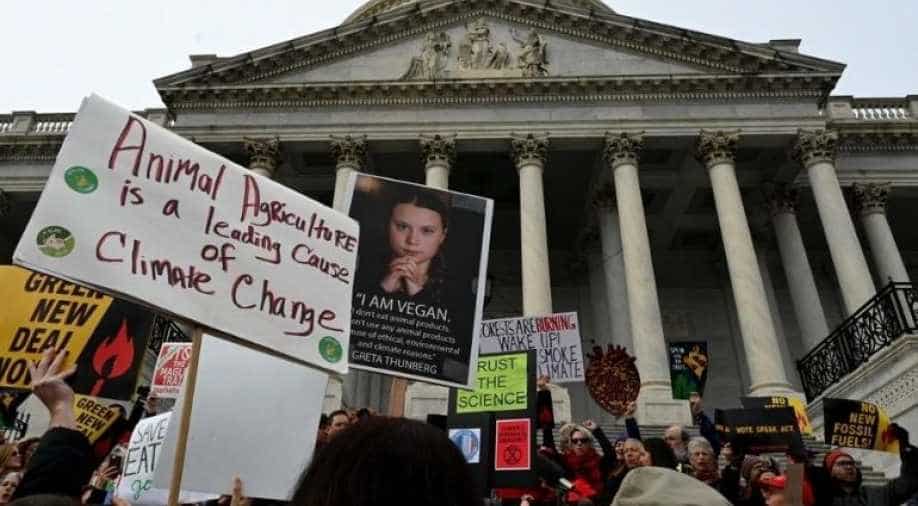 Posters are hoisted in front of the US Capitol as actresses and activists Lily Tomlin(C-L) and Jane Fonda (C) lead a climate protest in Washington, DC on December 27, 2019. Photograph:( AFP )

In Colombia and Philippines alone, over 212 people were killed last year

Defenders of land and environment have been facing wrath from mega-companies and governments for long, but now they may also be facing persecution.

Over the last year, a record number of activists were killed for seeking land and environment protection. As the climate crisis and the dialogue around it thickens, more activists are put at risk of getting killed.

As per data compiled by watchdog Global Witness over the last year, four activists were killed every week in 2019. This increase has also been attributed to the COVID-19 lockdown, which has made poaching of these activists easier.

In Colombia and Philippines alone, over 100 out of the total 212 people were killed last year. This accounted for over a 30 per cent increase from 164 deaths in 2018. It is also more than the record in 2017. 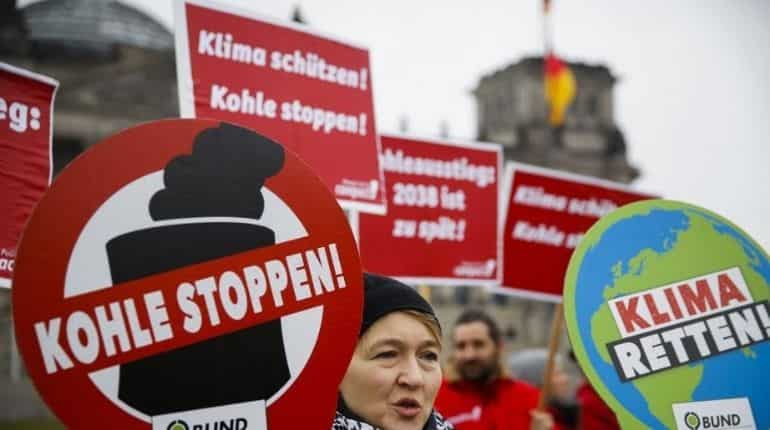 An environmental activist protests outside the Reichstag building housing the Bundestag (lower house of parliament) in Berlin on March 6, 2020. Protestors from Campact and Bund made themselves heard outside the building during a sitting of the Bundestag as the German federal parliament heard the first reading of the coal bill presented by the government. | AFP

Global Witness did warn though, that the number of deaths will actually be higher.

Out of these, most deaths were related to land and environment. Following which, the sectors that witnessed deaths include agriculture, logging, and criminal gangs.

However, indigenous populations or “tribals” remain at the highest risk, and accounting for 40 per cent murders in 2019.

The woes of such communities have increased owing to COVID-19, which may have not brushed against such groups had environment and land been protected and demarcated. In the Amazon, Brazil continues to undertake overwhelming deforestation work.

The local groups in Brazil have claimed that they are “facing extinction”, while saying that the right-wing president Jair Bolsonaro, who himself had recently tested positive, was attempting to eliminate tribal groups. The country witnessed 24 documented deaths in 2019.

Colombia recorded the most number of deaths at 64. This also marks the highest number coming in from any country ever. The country has witnessed an increase in the murders of local leaders. In the country, criminal gangs and local militias depend on drug trade, which spurs more violence.

Philippines was the most deadly country to live in for people protecting land and the environment in 2018. In 2019, 48 deaths were recorded. The president, Rodrigo Duterte is eyeing plans to convert huge areas of land into industrial embankments.

The report noted that Europe was the last affected continent. Over two-thirds of these killings took place in Latin America in 2019. In the Amazon region alone, 33 people were killed.