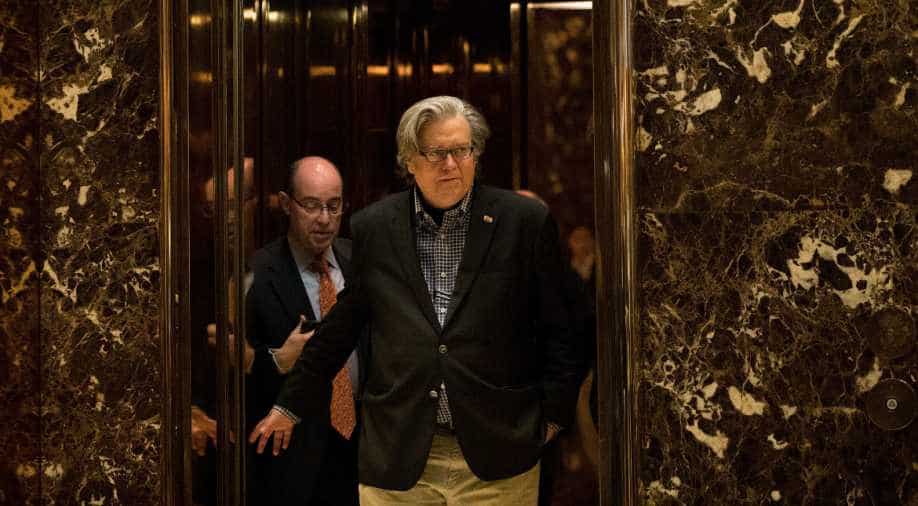 Bannon insisted during the interview at Trump Tower that he is not a racist, but a nationalist compelled to return America's working class to prominence in a rapidly changing and modernising world. Photograph:( Getty )

Steve Bannon rose to immense political power by orchestrating Donald Trump's stunning White House victory, an accomplishment he suggested on Friday puts him in the company of ex-vice president Dick Cheney, Darth Vader -- and even the devil himself.

"Darkness is good," Bannon, who was named Trump's chief strategist for the incoming administration last Sunday after he turned the struggling candidate's presidential campaign into ballot box gold, told The Hollywood Reporter in an interview.

The 62-year-old leader of the Breitbart News website, which has been described as a haven for the "alt-right" anti-mainstream movement, ignited controversy this year due to his alleged alignment with white supremacists, white nationalists and anti-Semites.

Bannon insisted during the interview at Trump Tower in Manhattan that he is not a racist, but a nationalist compelled to return America's working class to prominence in a rapidly changing and modernising world.

"The globalists gutted the American working class and created a middle class in Asia."

While Breitbart News draws readers fed up with the multiculturalism, immigration policies and political correctness of the left, Bannon proclaims his anti-establishment bent is jobs-driven.

"It's everything related to jobs," he added. "I'm the guy pushing a trillion-dollar infrastructure plan" to rebuild US roads, ship yards, and steel mills.

"It will be as exciting as the 1930s, greater than the (president Ronald) Reagan revolution -- conservatives, plus populists, in an economic nationalist movement."

Bannon had a blue-collar upbringing, but he quickly became part of the very establishment he rails against.

He began his career as a Goldman Sachs banker, then became a producer in Hollywood before taking over the Breitbart news platform. Bannon is currently on leave from Breitbart while working for Trump.