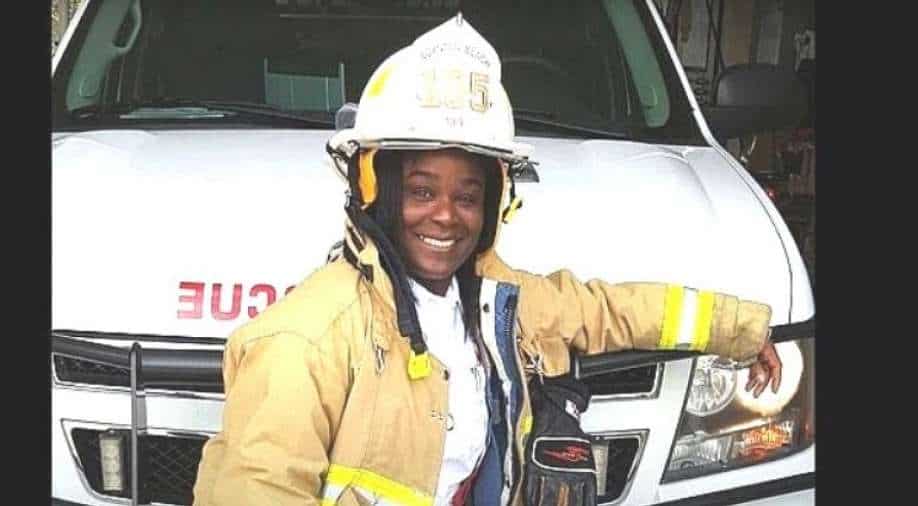 Now, Clemons, 48, who rose to the rank of deputy chief of the Boynton Beach Fire Rescue Department before retiring in 2020, is suing the city for defamation, libel and negligence. The city has denied the allegations, and it apologized last year for the depiction of Clemons and the former fire chief in the mural, which was immediately removed.

The city had never had a Black woman as a firefighter before Latosha Clemons, but last year when she glimpsed a publicly commissioned mural depicting her, she said, she didn’t recognize herself: She was white.

The mural, created as a window covering for a new fire station in Boynton Beach, Florida, as part of a public art initiative sponsored by the city, had changed the skin color of Clemons and that of a former fire chief who is also Black. The image of Clemons, taken from a photograph of her with two white female firefighters, had been substantially altered.

Now, Clemons, 48, who rose to the rank of deputy chief of the Boynton Beach Fire Rescue Department before retiring in 2020, is suing the city for defamation, libel and negligence. The city has denied the allegations, and it apologized last year for the depiction of Clemons and the former fire chief in the mural, which was immediately removed.

In the lawsuit, filed in April in Circuit Court in Palm Beach County, Clemons said that the mural’s misrepresentation of her had caused her mental and emotional harm and had damaged her reputation.

"The unveiling of the mural was humiliating, painful and demoralizing," Clemons said in a statement issued by her lawyer Monday. "After providing the city of Boynton Beach with a lifetime of professional fire service, to be whitewashed and not memorialized for who I am will forever live with me. As the first and only Black woman in the department, I deserved the respect I earned on a daily basis serving the citizens of Boynton Beach and deserved to be recognized for who I am: a Black woman."

In an email Monday, James A. Cherof, a lawyer for the city of Boynton Beach, said that he could not comment on pending litigation, but referred to a Sept. 21 court filing in which the city disputed Clemons’ allegations.

In the filing, Boynton Beach officials contended that the city employees who were responsible for altering the design for the mural had failed to adhere to the design approved by the City’s Art Commission and were acting outside of the scope of their employment without the city’s knowledge or consent. Boynton Beach, which has a population of about 78,000, is in Palm Beach County and is about 33 miles north of Fort Lauderdale.

Two of the city officials who were involved in the project, who are both white, were removed from their jobs last year, The Palm Beach Post reported.

In an email statement Monday, the city’s former public arts manger, Debby Coles-Dobay, said that she had been pressured by top fire officials to make changes to the mural. She said that the purpose of the project was to preserve the Fire Rescue Department’s culture and pride while building strong community relations.

"It was not to ‘honor the contribution of Fire Rescue Department employees’ as published in the city statements," Coles-Dobay said. "Prior to artwork installation, senior-level staff Chief Matthew Petty and Fire Marshal Kathy Cline refused to approve the installation and directed me to convey the changes to be made."

Petty, who was fire chief at the time of the mural project and left the department last year, hung up the phone when reached for comment Monday.

Cline and Lori LaVerriere, the city manager for Boynton Beach, did not immediately respond to requests for comment Monday.

In a YouTube video posted in June 2020, LaVerriere said that she had not been aware of the changes to the mural’s design and expressed regret. She said that the images had been altered so individuals would not be identifiable.

"It went way too far," LaVerriere said. "I want to apologize. This should have never happened."

Glenn Joseph, who is Black and was the former fire chief depicted in the mural as white, declined to comment Monday.

Clemons is seeking more than $30,000 in damages in the lawsuit, which said that the city had a duty to portray her accurately.

"The city breached that duty," the lawsuit said, "by allowing the mural to depict Clemons as someone of a completely different race, white, a race the city presumably felt better fit the image it was looking to project."