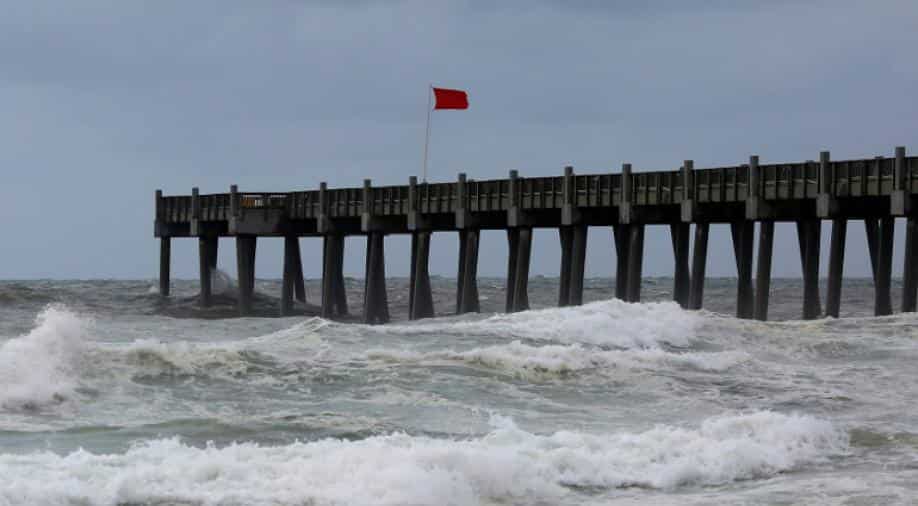 A red flag, warning of dangerous conditions, is seen on a pier in advance of Hurricane Michael in Pensacola, Florida, US October 9, 2018. Photograph:( Reuters )

The storm came ashore as a Category 4 hurricane on the five-step Saffir-Simpson wind scale.

Hurricane Michael, the fiercest storm to hit Florida in a quarter century and the third-most powerful ever to strike the US mainland, roared into the state's Gulf coast on Wednesday with tree-snapping winds, towering waves and torrential rains.

Michael, whose rapid intensification as it churned north over the Gulf of Mexico caught many by surprise, made landfall early in the afternoon near Mexico Beach, about 20 miles (32 km) southeast of Panama City in Florida's Panhandle region, with top sustained winds reaching 155 miles per hour (249 kph).

The storm came ashore as a Category 4 hurricane on the five-step Saffir-Simpson wind scale. Its sustained winds were just 2 mph (3.2 kph) shy of an extremely rare Category 5.

As predicted, the storm was downgraded hours later to a still-formidable Category 3 with maximum sustained winds of 125 mph (205 kph) and higher gusts as it pushed inland to the Alabama-Georgia border.

Florida Governor Rick Scott said that as of nightfall, about five hours after Michael struck land, there were no confirmed reports of storm fatalities.

Causing major disruptions to oil and gas production in the Gulf even before its arrival, the storm was forecast to unleash waves as high as 14 feet (4.3 meters) above normal sea levels in some areas, the National Hurricane Center said.

“My God, it’s scary. I didn’t expect all this,” said Bill Manning, 63, a grocery clerk who fled his camper van in Panama City for safer quarters in a hotel, only to see the electricity there go out. "Panama City, I don’t know if there will be much left."

Television news footage showed floodwaters up to the roofs of many homes in Mexico Beach. The fate of about 280 residents who authorities said defied evacuation orders was unknown.

"There are so many downed power lines and trees that it's almost impossible to get through the city," Apalachicola Mayor Van Johnson said.

The Federal Emergency Management Agency (FEMA) said on Tuesday that an estimated 500,000 Florida residents had been ordered or urged to seek higher ground before the storm in 20 counties spanning a 200-mile (320-km) stretch of shoreline.

But Brad Kieserman of the American Red Cross said Wednesday that as many as 320,000 people on Florida's Gulf Coast had disregarded mandatory or voluntary evacuation notices.

An estimated 6,000 evacuees took cover in emergency shelters, most of them in Florida, and that number was expected to swell to 20,000 across five states by week's end, Kieserman said.

Even before Michael made full landfall, it was whipping trees with its winds and flooding the town of Port St. Joe, just south of Mexico Beach.

"It feels like you don't know when the next tree is going to fall on top of you because its blowing so ferociously," said Port St. Joe Mayor Bo Patterson. "It's very, very scary. We have trees being uprooted, heavy, heavy rain."

Patterson said about 2,500 of the town's 3,500 people had stayed put, including about 100 in a beachside area who ignored a mandatory evacuation order. "This happened so quickly, we weren't exactly prepared," he said.

Michael grew from a tropical storm into a Category 4 hurricane over the course of about 40 hours.

"Satellite images of Michael’s evolution on Tuesday night were, in a word, jaw-dropping," wrote Bob Henson, a meteorologist with weather site Weather Underground.

With minimum barometric pressure recorded at 919 millibars, a measure of hurricane strength, Michael stood as the strongest storm ever to hit Florida's Panhandle and the most intense anywhere in the state since Hurricane Andrew in 1992.

Michael also ranked as the third-most powerful storm on record to make landfall in the continental United States, after Hurricane Camille on the Mississippi Gulf Coast in 1969 and the so-called Labor Day hurricane of 1935 in the Florida Keys.

President Donald Trump declared a state of emergency for all of Florida, freeing up federal assistance to supplement state and local disaster responses.

At mid-afternoon, about 192,000 homes and business customers were already without power in Florida alone, with more outages reported in Georgia and Alabama, utility companies said.

Michael was forecast to move across southeastern Alabama and southwestern Georgia on Wednesday night.

Helen Neal, 88, and her husband, JW Neal, 87, preferred to take their chances in a hotel rather than stay in their two-story Panama City Beach beachfront house about a mile away.

"We just finished renovating and updating," she said. "We’re kind of nervous. God willing, we’ll still have some place."

About 3,500 Florida National Guard troops were deployed to assist with evacuations and storm recovery, along with more than 1,000 search-and-rescue personnel, Scott said.

NHC's Graham warned that the storm would continue to pack tropical storm-force winds when it reached the Carolinas, still reeling from severe flooding in the aftermath of Hurricane Florence last month. Up to a foot (30 cm) of rainfall was forecast for some areas from Michael.