Fleeing war, Russian and Ukrainian travel thousands of kilometres to get married at Mexico border 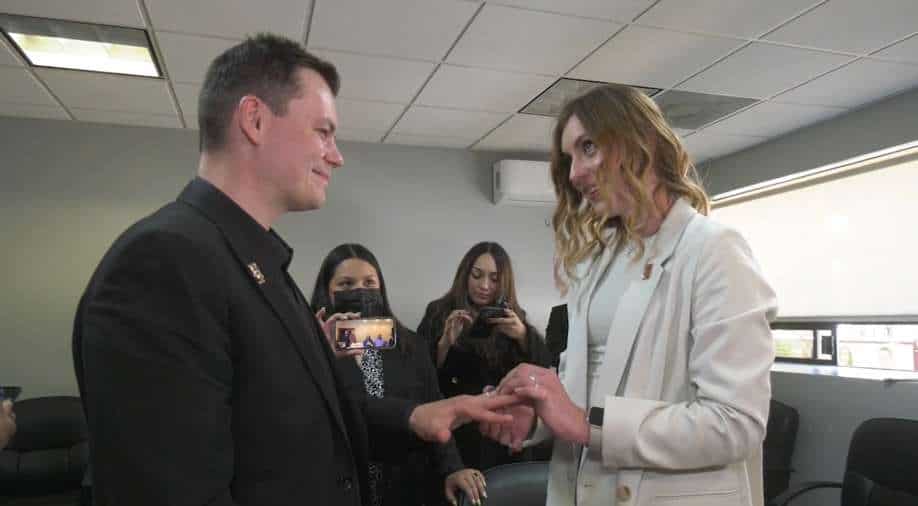 Due to the restrictions placed by the US authorities on Russian refugees, the couple went to the municipal directorate of migrant services in Tijuana on Wednesday to get their marriage registered.

Love transcends boundaries. This adage holds true for this couple who left their home countries—Russia and Ukraine—to tie the knot in Tijuana, the border city connecting Mexico with California and to seek asylum in the United States.

It was a love at first sight for them. They wanted to get married in Kyiv in April, but the prospect of war scuttled their plans.

Before the Russian invasion began, the couple decided to leave Ukraine. Like other refugees, they also thought of resettling in the United States.

The couple travelled thousands of kilometres, lasting six days, to reach the US-Mexico border where a refugee camp at the San Ysidro checkpoint is set up.

However, America’s harsh immigration policies for Russians, in the wake of the war, caused problems for Bobrovski.

According to Reuters, the US authorities only allowed Daria to enter as a refugee, as the Russian community has not been allowed to enter the country since the war began.

"The problem that the couple faced when arriving at the San Ysidro checkpoint is that it only allows access to the United States through refugee status to Ukrainian or Russian citizens who can legally prove their relationship. For the Russian community, right now, there is no legal way to enter the United States, derived from this war conflict," the Tijuana city council said in a press release, according to NBC Sandiego

Due to the restriction, the couple went to the municipal directorate of migrant services in Tijuana on Wednesday to get their marriage registered.

“I'm very happy that I met some very nice people who could help us come together in this matrimony here in Mexico, in Tijuana," Sakhniuk was quoted as saying.

Her husband also appreciated the Mexican authorities for their help.

"We are very happy because all these people helped us make this happen, we are full of joy and gratitude to the Mexican people for what they have done for us. This was very exciting," said Bobrovski.

According to local media reports, the couple will cross into San Diego and subsequently settle in New York to begin their new life as a husband and wife.