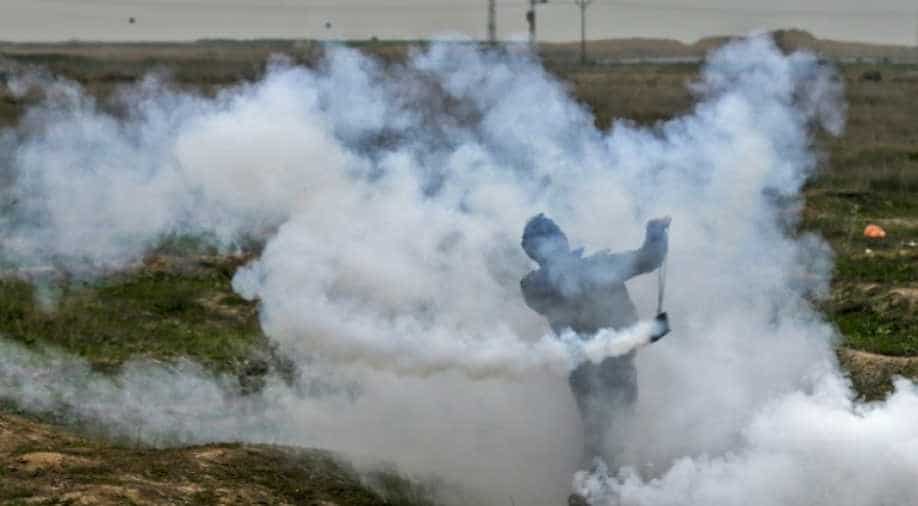 A Palestinian protester throws a tear gas canister back towards Israeli forces during clashes near the Israel-Gaza border, east of Gaza City, on December 20. Photograph:( AFP )

The men, aged between 22 and 27, died in separate incidents along the border fence, the ministry said.

Five Palestinians died during fresh clashes on the Gaza border Friday, the health ministry in the Hamas-run enclave said.

The men, aged between 22 and 27, died in separate incidents along the border fence, the ministry said.

Three were shot dead east of Khan Yunis in southern Gaza, while one was killed east of Jabalia in northern Gaza, the ministry said.

A fifth man died east of Bureij in central Gaza when a hand grenade he was holding exploded accidentally, eyewitnesses said.

The Israeli army did not comment on the deaths but said approximately 10,000 "demonstrators and rioters" were gathered along the border, with some setting tyres alight and hurling grenades.

Troops were responding with "riot dispersal means," the spokesman added.

Palestinians have gathered for protests along the Gaza border at least weekly since late March.

At least 213 Palestinians have been killed by Israeli fire in Gaza since the protests began on March 30, according to figures collated by AFP.

The majority have died during protests, though smaller numbers have been killed by airstrikes and tank fire.

One Israeli soldier was shot dead by a Palestinian sniper along the border in the same period.

Palestinian protesters are calling to be allowed to return to lands their families fled or were expelled from in a 1948 war surrounding the creation of Israel and which are now inside the Jewish state.

They are also opposing Israel's crippling blockade of Gaza.