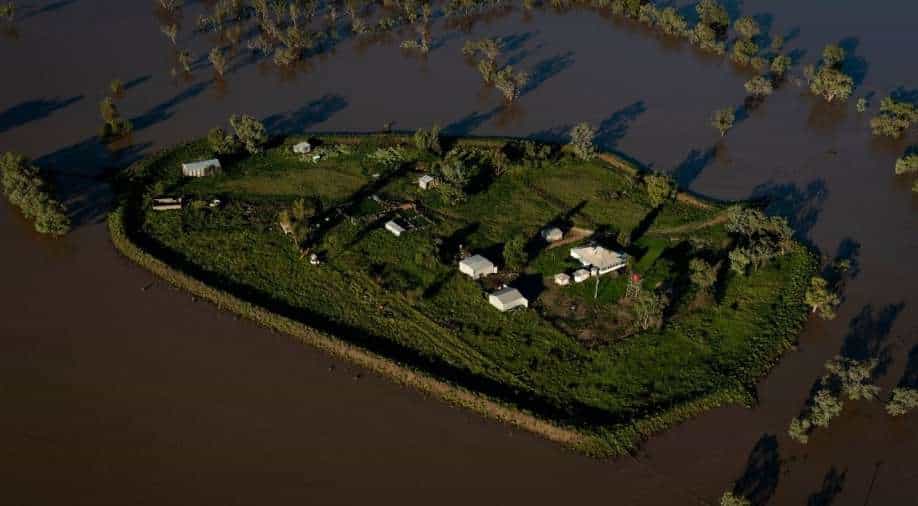 In Wee Waa, where the water has started to recede, supplies and people flowed in and out last week by helicopter and in a small boat piloted by volunteers

Two years ago, the fields outside Christina Southwell’s family home near the cotton capital of Australia looked like a dusty, brown desert as drought-fueled wildfires burned to the north and south.

Last week, after record-breaking rains, muddy floodwaters surrounded her, along with the stench of rotting crops. She had been trapped for days with just her cat and still didn’t know when the sludge would recede.

“It seems to take for bloody ever to go away,” she said, watching a boat carry food into the town of Wee Waa. “All it leaves behind is this stink, and it’s just going to get worse.”

Life on the land has always been hard in Australia, but the past few years have delivered one extreme after another, demanding new levels of resilience and pointing to the rising costs of a warming planet. For many Australians, moderate weather — a pleasant summer, a year without a state of emergency — increasingly feels like a luxury.

The Black Summer bush fires of 2019 and 2020 were the worst in Australia’s recorded history. This year, many of the same areas that suffered through those epic blazes endured the wettest, coldest November since at least 1900. Hundreds of people, across several states, have been forced to evacuate. Many more, like Southwell, are stranded on flood plain islands with no way to leave except by boat or helicopter, possibly until after Christmas.

And with a second year of the weather phenomenon known as La Nina in full swing, meteorologists are predicting even more flooding for Australia’s east coast, adding to the stress from the pandemic, not to mention from a recent rural mouse plague of biblical proportions.

“It feels constant,” said Brett Dickinson, 58, a wheat farmer who lives not far from Southwell in northwest New South Wales, about a six-hour drive from Sydney. “We’re constantly battling all the elements — and the animals too.”

There’s a tendency to think of such extremes as “natural disasters” or “acts of God” that come and go with news reports. But Australia’s nightmares of nature ebb and flow. Its droughts and floods, although weather opposites, are driven by the same forces — some of them timeless, others newer and caused by humans.

Andy Pitman, director of the ARC Center of Excellence for Climate Extremes at the University of New South Wales, said the ups and downs of weather had been severe for millenniums on the Australian landmass, which is as large as the continental United States and surrounded by powerful climate-driving oceans, from the tropical South Pacific to the colder Southern Ocean off Antarctica.

As a consequence, the El Nino and La Nina patterns tend to hit Australia harder than they do other places, with harsh droughts that end with major floods. Some scientists even suggest that the way that marsupials reproduce, with the ability to put active pregnancies on pause, shows that the El Nino-La Nina cycle has been around long enough for flora and fauna to adapt.

The results are already visible in government budgets. The cost of climate disasters in Australia has more than doubled since the 1970s.

Ron Campbell, the mayor of Narrabri Shire, which includes Wee Waa, said his area was still waiting for government payments to offset damage from past catastrophes. He wondered when governments would stop paying for infrastructure repairs after every emergency.

“The costs are just enormous, not just here but at all the other places in similar circumstances,” he said.

More viscerally, the effect of a “supercharged climate” is drawn on the land itself. Across the vast tracts of farmland and small towns between Melbourne and Sydney where much of the country’s food, cattle, wine — and coal — are produced, the effects of fire, drought and flood coexist.

Even in areas that did not burst into flames, the heat waves and lack of rainfall that preceded the bush fires killed as much as 60% of the trees in some places. Cattle farmers culled so much of their herds during the drought that beef prices have risen more than 50% as they rush to restock paddocks nourished (nearly to death) by heavy rain.

Bryce Guest, a helicopter pilot in Narrabri, once watched the dust bowls grow from above. Then came “just a monstrous amount of rain,” he said, and a new kind of job: flights to mechanical pumps pushing water from fields to irrigation dams in a last-ditch effort to preserve crops that had been heading for a record harvest.

On one recent flight, he pointed to mountains of stored grain — worth six figures, at least — that were ruined by the rains, with heavy equipment trapped and rusting next to it. Farther inland, a home surrounded by levees had become a small island accessible only by boat or copter.

“Australia is all about water; everything revolves around it,” he said. “Where you put your home, your stock. Everything.”

The flood plains in what is known as the Murray-Darling basin stretch out for hundreds of miles, not unlike the land at the mouth of the Mississippi River. The territory is so flat that towns can be cut off with roads flooded by less than an inch of additional rain.

That happened a few weeks ago in Bedgerabong, a few hundred miles south of Narrabri. On a recent afternoon, a couple of teachers were being driven out of town in a hulking firetruck — equipment for one disaster often serves another. Across a flooded road behind them, three other teachers had decided to camp out so they could provide some consistency for children who had already been kept out of school for months by pandemic lockdowns.

Paul Faulkner, 55, principal of the school (total enrollment: 42), said that many parents craved social connection for their children. The Red Cross has sent in booklets for those struggling with stress and anxiety.

“COVID has kept everyone from their families,” he said. “This just isolates them even more.”

He admitted that there were a few things they did not discuss; Santa, for one. The town is expected to be cut off until after the holidays as the waters that rose with surging rains over a few days take weeks to drain and fade.

In Wee Waa, where the water has started to recede, supplies and people flowed in and out last week by helicopter and in a small boat piloted by volunteers.

Still, there were shortages everywhere — mostly of people. In a community of around 2,000 people, half of the teachers at the local public school couldn’t make it to work.

At the town’s only pharmacy, Tien On, the owner, struggled with a short-handed staff to keep up with requests. He was especially concerned about delayed drug deliveries by helicopter for patients with mental health medications.

Southwell, 69, was better prepared than most. She spent 25 years volunteering with emergency services and has been teaching first aid for decades. After a quick trip into Wee Waa by boat, she returned to her home with groceries and patience, checking a shed for the stray cats she feeds and discovering that only one of her chickens appeared to have drowned.

She said she wasn’t sure how much climate change could be blamed for the floods; her father had put their house on higher stilts because they knew the waters would rise on occasion.

All she knew was that more extreme weather and severe challenges to the community would be coming their way.

“The worst part of it is the waiting,” she said. “And the cleanup.”