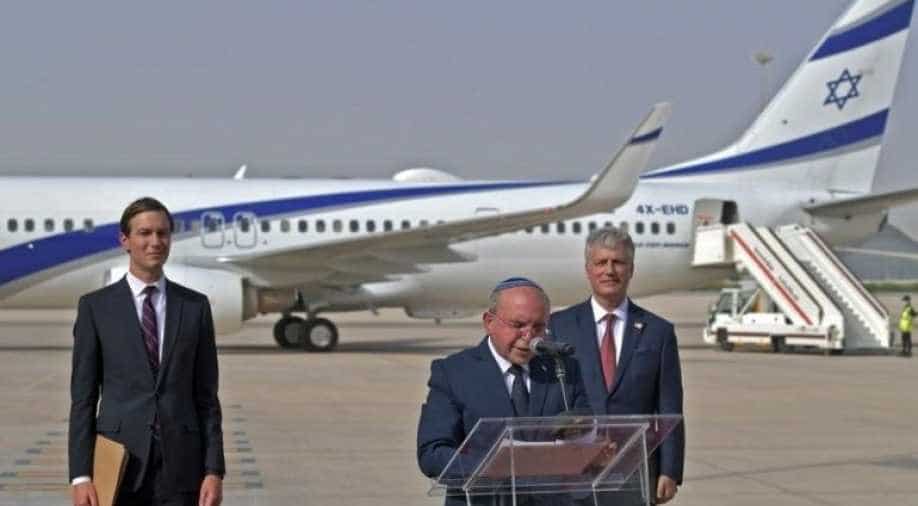 The Head of Israel's National Security Council, Meir Ben-Shabbat, speaks as he stands next to US Presidential Adviser Jared Kushner (L) and US National Security Adviser Robert O’Brien at the tarmac of Abu Dhabi airport following the arrival of the first-e Photograph:( AFP )

Marking the first major step after the announcement of a peace deal, delegates from Israel and the US reached Abu Dhabi today

Together, they promised to pursue peace with the Arab world. “We will continue to pursue peace between Israel, the biblical homeland of the Jewish people and its Arab and muslim neighbours and i have never been more hopeful about peace”, said Jared Kushner

“We're all thrilled by the pace, the swift pace of normalisation between Israel and the UAE”, announced Israeli PM Benjamin Netanyahu.

On August 31, the Ben Gurion airport in Tel Aviv began preparations for some high profile check-ins and to make history.

"Today we are making history, today we are living history. Today is the first direct flight from Tel Aviv to Abu Dhabi ever”, said Ofir Gendelman, Prime Minister Benjamin Netanyahu's spokesperson to the Arab media.

Marking the first major step after the announcement of a peace deal, delegates from Israel and the US reached Abu Dhabi today.

After landing, Kushner said, “I prayed yesterday at the (western) wall that Muslims and Arabs from throughout the world will be watching this flight, recognising that we are all children of god, and that the future does not have to be pre-determined by the past”.

The captain of an "Israeli el al airlines" greeted the passengers on this historic flight in three different languages.

“Ladies and gentleman shalom and welcome on board el al flight 971 from tel aviv to abu dhabi. This is captain Tal Becker speaking”, the captain announced.

At around 4 pm Gulf Standard Time, the flight landed in Abu Dhabi. The delegates received a warm welcome from Emirati officials.

Jared Kushner made another statement calling for peace. “This three-hour flight has taken more than 70 years to make, it marks a new turning point in Israel's relations with the Arab world. There are big prizes for all three players”, he said.

“For Israel, this may lead to regional recognition of the Jewish state by other Arab countries. For the UAE, the sheikhdom's glittering finance hubs stand to benefit from west Asia's most prominent security superpower. And for America, Donald Trump a president under pressure will showcase a historic peace deal in West Asia”, he added.