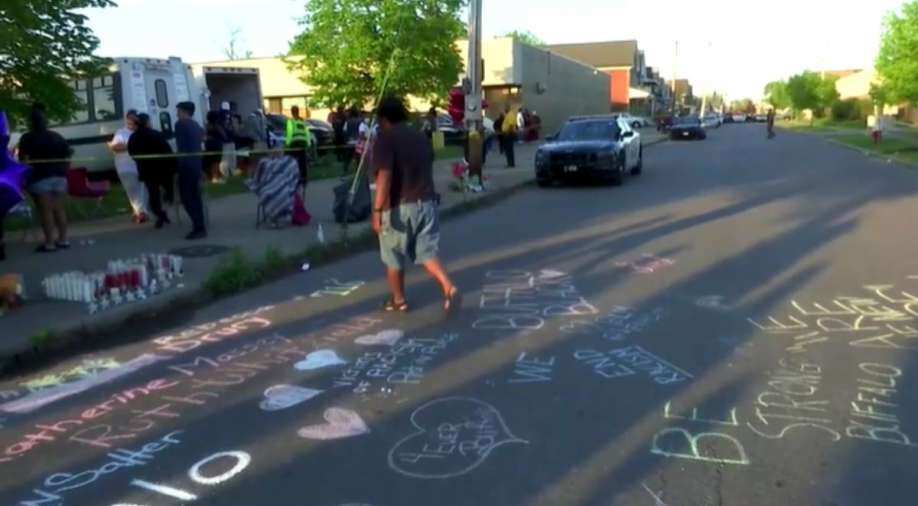 In Buffalo, the alleged shooter was a racist bent on killing Black people, according to authorities. Photograph:( Reuters )

After mass shootings killed and wounded people grocery shopping, going to church and simply living their lives last weekend, the nation marked a milestone of 1 million deaths from COVID-19. The number, once unthinkable, is now an irreversible reality in the United States like the persistent reality of gun violence that kills tens of thousands of people a year.

Americans have always tolerated high rates of death among certain segments of society. But the sheer numbers of deaths from preventable causes, and the apparent acceptance that no policy change is on the horizon, raises the question: Has mass death become accepted in America.

"I think the evidence is unmistakable and quite clear. We will tolerate an enormous amount of carnage, suffering and death in the U.S., because we have over the past two years. We have over our history," says Gregg Gonsalves, an epidemiologist and professor at Yale who was a leading member of the AIDS advocacy group ACT UP.

"If I thought the AIDS epidemic was bad, the American response to COVID-19 has sort of...It's a form of the American grotesque, right?" Gonsalves says. Really, a million people are dead And you're going to talk to me about your need to get back to normal, when for the most part most of us have been living pretty reasonable lives for the past six months.

Certain communities have always borne the brunt of higher death rates. There are profound racial and class inequalities in the United States, and our tolerance of death is partly based on who is at risk, says Elizabeth Wrigley-Field, a sociology professor who studies mortality at the University of Minnesota.

"Some people's deaths matter a lot more than others, "she laments. "I think that's what we're seeing in this really brutal way with this coincidence of timing."

In Buffalo, the alleged shooter was a racist bent on killing Black people, according to authorities. The family of 86-year-old Ruth Whitfield, one of the 10 people killed, channelled the grief and frustration of millions as they demanded action.

You expect us to keep doing this over and over and over again over again, forgive and forget, her son, former Buffalo Fire Commissioner Garnell Whitfield, Jr, said. "While people we elect and trust in offices around this country do their best not to protect us, not to consider us equal."

That sense that politicians have done little even as the violence repeats itself is shared by many Americans. It's a feeling encapsulated by the thoughts and prayers offered to victims of gun violence by politicians unwilling to change policies, according to Martha Lincoln, an anthropology professor at San Francisco State University.

"I don't think that most Americans feel good about it. I think most Americans would like to see real action from their leaders in the culture about these pervasive issues," says Lincoln, who sees a similar political vacuum around COVID-19.

With COVID-19, American society has even come to accept the deaths of children from a preventable cause. Pediatrician Dr Mark W Kline wrote in a guest column for The Advocate newspaper that more than 1,500 children have died from COVID-19, and recalled a time in pediatrics when children were not supposed to die.

"There was no acceptable pediatric body count," he wrote. "At least, not before the first pandemic of the social media age, COVID-19, changed everything."

Gun violence is such a part of life in America now that we organise our lives around its inevitability, says Sonali Rajan, a Columbia University professor who researches school violence. Children do lockdown drills at school. And in about half the states, Rajan says, teachers can carry firearms. She notes that an estimated 100,000 people are shot annually and some 40,000 will die.

"It's remarkable how that responsibility has been sort of abdicated, is how I would describe it," Rajan says.

The level of concern about deaths often depends on context, says Rajiv Sethi, an economics professor at Barnard College. He points to a rare but dramatic event such as an airplane crash, which does seem to matter to people.

Sethi notes there are more suicides from guns in America than there are homicides, an estimated 24,000 gun suicides compared with 19,000 homicides. But even though there are policy proposals that could help within the bounds of the Second Amendment, he says, the debate on guns is politically entrenched, causing 'paralysis.'

"It divides us when people think that there's nothing they can do," says Dr Megan Ranney of Brown University's School of Public Health.

Ranney points to false narratives spread by bad actors, such as denying that the deaths were preventable, or suggesting those who die deserved it. There is an emphasis in the United States on individual responsibility for one's health, Ranney says.

"It's not that we put less value on an individual life, but rather we're coming up against the limits of that approach," she says.
In truth, she says, any individual's death or disability affects the community.

Similar debates happened in the last century about child labour laws, worker protections and reproductive rights, while in the 1980s during the AIDS crisis, there a lack of political will to address it in an environment where anti-gay discrimination was rampant.

"I don't think that those things are off the table now. It's just that it's not really clear if they're going to emerge," Wrigley-Field says. "I don't think giving up is a permanent state of affairs. But I do think that's where we're at, right at this moment."