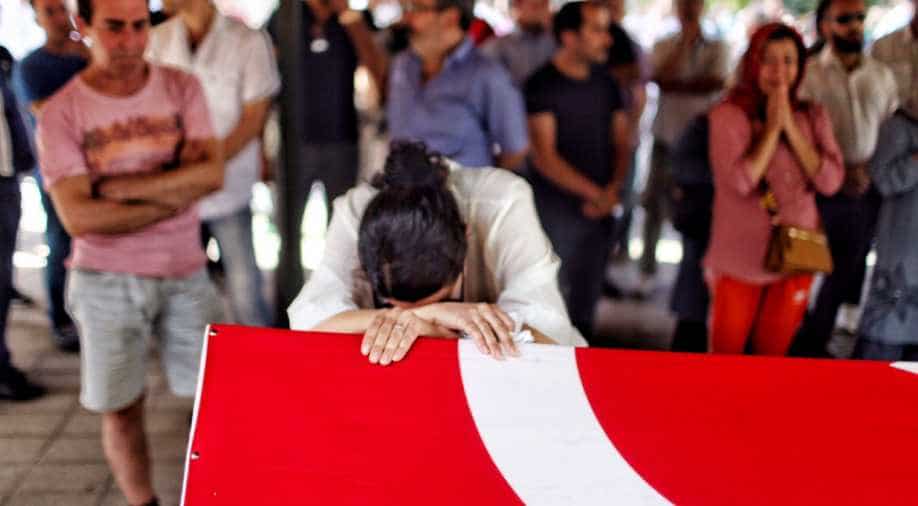 Relatives of a 27-year-old flight officer who was killed in the attack on Istanbul airport. Photograph:( Getty )

Evidence gathered so far points to Islamic State being responsible for a triple suicide bombing at Istanbul's main airport this week, Turkish interior minister Efkan Ala told Parliament on Thursday.

Ala said the death toll from Tuesday night's attack had risen to 43 including 19 foreigners. The three suspected bombers were from Russia, Uzbekistan and Kyrgyzstan, a Turkish government official said earlier.

The attack on one of the world's busiest airports, a hub at the crossroads of Europe and Asia, was the deadliest in a series of suicide bombings in Turkey this year.

Hundreds of employees at Ataturk airport and families gathered at a makeshift memorial in the terminal building to pay their respects to 15 colleagues who were killed in the attack.

"This could have been worse. We lost our friends," an employee at the airport, Aziz Aydin, said.

Wars in neighbouring Syria and Iraq have fostered a home-grown Islamic State network blamed for a series of suicide bombings in Turkey, including two others this year targeting foreign tourists in the heart of Istanbul.

Critics say Turkey woke up too late to the threat from Islamic State, focusing instead early in the Syrian civil war on trying to oust president Bashar al-Assad by backing even his hardline Islamist opponents, arguing there could be no peace without his departure.

Thousands of foreign fighters from scores of countries have crossed Turkey to join Islamic State in Syria and Iraq in recent years. Turkey has tightened security on the Syrian border but has long argued it needs more information from foreign intelligence agencies to intercept the fighters.