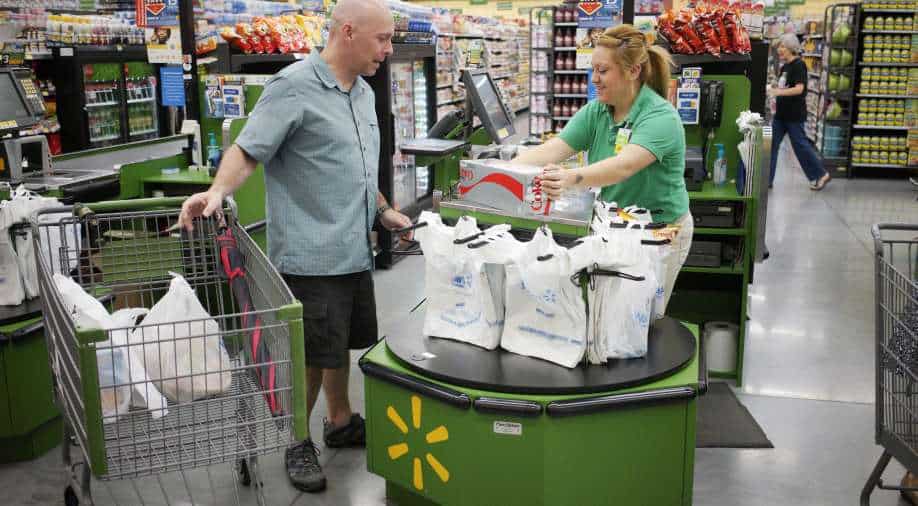 A customer speaks to the cashier as he checks out at a Walmart Neighborhood Market in Bentonville, Arkansas, June 2014 Photograph:( Reuters )

In a survey the group conducted of Walmart associates — the term the company uses for all non-temporary employees — in May 2020, nearly half said they had come into work sick or would do so, fearing retaliation otherwise

It was a hot morning in Baton Rouge, Louisiana, the day that Peter Naughton woke up on the floor.

Sore, disoriented, he’d already grasped what his mother was now telling him: He’d had another seizure. But he also grasped a larger truth: He needed to pull it together and somehow go to work.

A cashier and self-checkout host at the nearby Walmart, Naughton dreaded depleting his limited paid time off in the midst of a pandemic. His mother, for her part, insisted that her epileptic son, then 44, stay home and rest. The hours after a seizure were difficult enough. Toss in the stress of COVID-19 and a customer base that largely — and often angrily — rejected mask use, and a day at work seemed anything but recuperative.

In the end, Naughton’s growing headache and general fogginess were intense enough that he conceded to his mother’s wishes. He dialled once, twice, three times. No answer. Given the penalty for missing work without giving notice — and the fear of risking his job during uncertain times — he saw what he had to do. Reeling, he made the trip to the store and clocked in.

That was the summer of 2020, and in the bewildering year since, the stakes and strain around low-wage frontline jobs like Naughton’s seem only to have multiplied.

As shuttered offices cautiously debate the merits and logistics of reopening, a parallel sphere of workers — retail employees, day labourers, emergency personnel, medical staff, and so on — seemingly inhabit another country entirely. In their case nothing ever shuttered. Often their jobs just got really, really hard.

“Every day is frightening,” Naughton said recently, now nearly two years into his employment at Walmart.

Naughton said this in the dark, his power still out days after Hurricane Ida had barreled through Louisiana. It was 93 degrees. Later he would take another cold shower, also in the dark, in hopes of cooling off before bed.

Naughton lives on a quiet, grassy street of low brick homes with his ageing parents, not far from where he attended high school some two decades prior. He had an apartment of his own for a while last year, but his $11.55 hourly wage wasn’t enough to pay the rent, even working full time. So he moved back in with his mother and father, and now lives in fear of bringing the highly contagious delta variant home to them. (Naughton is fully vaccinated. But at 78, his father has health issues that prevent him from getting the shots, Naughton said — health issues that make severe illness likelier should he contract the disease.)

Elsewhere in the country, the conversation has begun to move on, away from early Covid alarm and into something more guardedly speculative. What will post-pandemic life look like? How have our priorities shifted? But for vast swaths of the nation, largely untouched by doses from Pfizer and Moderna, it remains late 2020 in many ways.

“A lot of people here still don’t believe the virus is real — even when the hospitals are full, even when they have family dying,” Naughton said. “With the vaccines, one co-worker told me getting it would go against her faith. Another told me it contains baby fetuses and mercury. Someone else said it was created by Bill Gates to insert microchips to track you. I said, ‘Why would he want to track you?’”

The conversations Naughton describes may be epidemiologically out of step, but he and thousands of others seem trapped in an America-right-now vortex, a swirl of politics, belief, resentment and fear. At fast-food restaurants, grocery stores, warehouses, nursing homes and anywhere else frontline workers show up each day, a deep schism has taken hold. Workers nervous about the virus find themselves at the mercy of those who aren’t.

“If I ask people to wear a mask or socially distance at work, they get mad and tell the manager. Then I have to get coached. If you get coached too many times, you lose your job,” Naughton said, referring to the company’s system for managing worker infractions. (Charles Crowson, a Walmart spokesman, did not dispute that an accumulation of coachings could lead to termination.)

Draped over this dynamic are often the stark realities of poverty, and the stresses of navigating a low-paying job in a high-pressure situation. And so an already strained situation strains further. Bitterness over masking requests, job insecurity, a run on bottled water, vaccine politics — tensions routinely boil over in his store and beyond, Naughton said.

“It wasn’t always like this. It used to be more friendly here. It’s become hostile. People are really on edge. They fight with you in the store, or with each other,” he said. “The other day a woman wanted to fight over the price of potatoes. You can even see it in how people drive, like they have a death wish.”

These days Naughton passes a fair amount of time alone. He burns off stress at the gym, goes on hikes, reads books on politics. (By flashlight, in the days after Hurricane Ida.) The delta resurgence also dealt a blow to his social life — at one point, concerned about the alarming spread in Louisiana, he cancelled plans to see live comedy with a co-worker. She went on without him; “she wasn’t worried about it,” he said.

Over the last few months, Naughton has pinned his hopes on a transfer — there’s another nearby Walmart he believes to be less stressful. After extensive lobbying, he said the move was finally approved. Coincidentally, it’s to the same store where his father routinely shops, Covid risks and all.

“He’s stubborn. He goes there for pastries, for Coke. He spends hours there. We tell him not to, it’s not safe,” Naughton said.

With nearly 1.6 million workers, Walmart is the largest private employer in the country. It employs 35,954 people in Louisiana alone, working for one of the 137 Supercenters, discount stores, neighbourhood markets or Sam’s Clubs across the state. Covid appears to have been good for the bottom line: During fiscal 2020, the company generated $559 billion in revenue, up $35 billion from the previous year. But labour activists say too little of that money has gone toward workforce protections, which in turn has prolonged the pandemic.

According to United for Respect, a nonprofit labour advocacy group for Walmart and Amazon workers — Naughton is an outspoken member — safety measures remain deeply insufficient.

“Thousands of Walmart associates across the country like Peter have been forced to endure poverty wages and abysmal benefits while working through a deadly pandemic, managing panic-buying sprees and culture wars over mask mandates,” said Bianca Agustin, the accountability director for United for Respect.

In a survey the group conducted of Walmart associates — the term the company uses for all non-temporary employees — in May 2020, nearly half said they had come into work sick or would do so, fearing retaliation otherwise. This past April the group released a report with the public health nonprofit Human Impact Partners, finding that Walmart could have prevented at least 7,618 Covid cases and saved 133 lives with a more robust paid sick time policy. (Researchers have estimated that some 125,000 Walmart workers nationwide likely contracted Covid between February 2020 and February 2021.)

United for Respect is pushing for five measures in response: hazard pay of $5 per hour; access to adequate paid and unpaid leave; immediate notification of positive cases within a given store; the inclusion of workers in the creation of safety protocols; and protection from retaliation. In the meantime, it has created a Covid reporting tool for workers at Amazon and Walmart. So far almost 1,900 cases have been claimed at 360 stores and facilities.

“Walmart lets in people without masks all the time, and social distancing isn’t enforced,” Naughton said. “Our lives are constantly in danger. They have ‘health ambassadors,’ but all they do is sit at the door offering customers masks. I’ve had to fill in for them. A lot of people just ignore you, or else get angry.”

In response, Crowson, the Walmart spokesman, replied that the company “has worked hard to protect the health and safety of associates and customers. This includes administering no-cost vaccinations, enhanced cleaning practices, daily health screenings and temperature checks for our associates, special bonuses and an emergency leave policy.”

For his part, Naughton continues fearing work while also fearing the idea of missing any. That’s partly the work ethic he inherited from his father, who never once called in sick to the chemical plant where he spent his career. But it’s also basic survival in perilous economic times. Putting aside any medical implications for him or his loved ones, he worries that contracting Covid could cost him his job. At 45, reliant on Medicaid for health coverage and having no retirement plan to speak of, he continues to don his yellow “Proud Walmart Associate” vest each morning.

Over the years Naughton has worked at fast-food restaurants, grocery stores and an amusement park. The idea of finding a more COVID-safe work-from-home gig appeals to him, but his hours at Walmart leave little time for job hunting. Regardless, he says the positions he comes across are “the kind you can’t get without experience, but you can’t get experience without a job.”

Asked about the distant universe of office careers and mask-wars-free remote work, Naughton, he replied that it all feels “unfair.”

“They say we’re essential,” he said, “but they treat us like we’re disposable.”