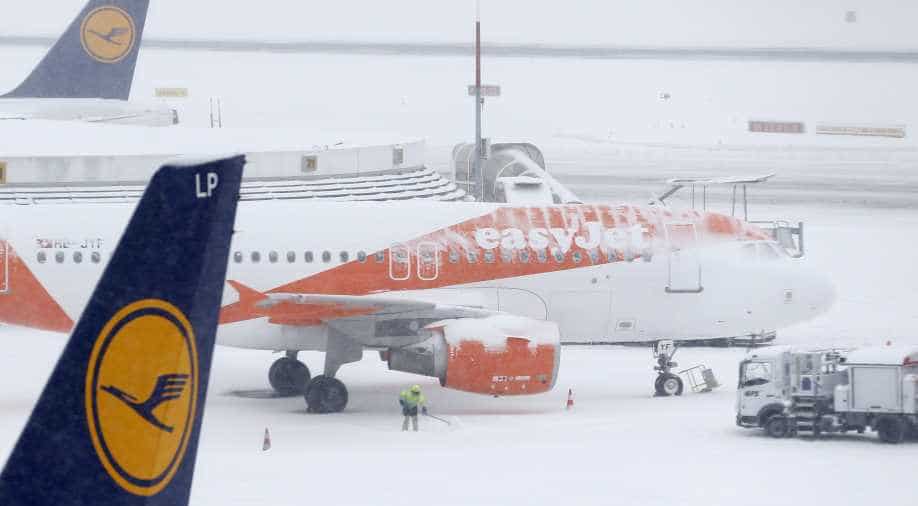 A man shovels snow next to an aircraft during a temporary closure at Cointrin airport in Geneva, Switzerland. Photograph:( AFP )

Europe's deep freeze, which has cost some 60 lives over the past week, showed little sign of ending Friday as a shivering continent awaited a sliver of weekend respite from the chaos wrought by a brutal Siberian weather system.

Geneva's busy airport announced it had re-opened shortly after midday "despite the unfavourable meteorological conditions", having warned earlier it faced staying shut for a second consecutive day as snowstorms continued to lash the Swiss city.

Airport authorities warned, however, of further "delays and cancellations.

Switzerland has seen the mercury plummet to records of up to minus 40 degrees Celsius (minus 40 Fahrenheit) in the ongoing blizzard, which has also impacted air, road and train transport around Europe and even covered usually balmy Mediterranean beaches with a blanket of snow.

In France, 21 departments, mainly in the northwest, remained on alert for snow and black ice as the vicious cold snap -- which British media have dubbed "the Beast from the East," the Dutch the "Siberian Bear" and Swedes the "snow cannon" -- maintained its grip.

Over the past week, the freezing conditions have claimed 59 lives according to an AFP toll - 23 in Poland, seven in Slovakia, six in the Czech Republic, five in Lithuania, four in France, at least three in Spain, two in Italy, Romania, Serbia and Slovenia and one in Britain, the Netherlands and Sweden.

The cold threw a spanner into the works of British Prime Minister Theresa May's plans to give a speech on Brexit in the northeastern city of Newcastle.

May elected to stay put in London given the transport mayhem, which saw motorists stuck in their cars around Manchester in the northwest and troops deployed overnight in Hampshire in the deep south to aid other drivers battling fresh snowfalls and icy gales.

Also having to change their plans were Andrew Waring and his wife, Daniella, who gave birth to baby daughter Sienna on the side of a snowbound main road outside the northeastern town of Darlington.

Mr Waring delivered the child on the roadside after they realised they would not reach the hospital in time, paramedics dubbing Sienna the #A66snowbaby after the road where she emerged into the world.

An ambulance then took the family to the hospital.

"Having been present at the birth of our two other children I just copied what I had seen then," Andrew Waring told the BBC.

Even so, Dublin airport remained closed until at least Saturday in Ireland, where some 24,000 people remained without electricity Friday morning.

The country battled to get over the worst of a combination of the cold blast and Storm Emma, which has also been battering western Europe and was doing its worst over Britain after moving up from further to the southwest.

Temperatures in London and Dublin remained just below freezing around midday, with Britain's Meteorological Office forecasting more snow on the way.

Many schools remained closed and local authorities told people to remain indoors unless they urgently needed to travel.

Elsewhere in Europe, Serbia and Croatia saw some improvement but two people died overnight in Poland as temperatures plunged to a low of -27 Celsius (-16.6 Fahrenheit). They were set to remain in some areas as low as -17 across the day even as forecasters spoke of a relative weekend thaw.

Folldal, a small village in central Norway, saw a record European low for recent days of - 42 Celsius during the night. Even so, residents used to harsh conditions were sanguine. "Life is generally ongoing," mayor Hilde Frankmo Tveren quipped to broadcaster TV2.