Ethiopia returns to chaos and violence: Over 200 dead after popular singer's murder 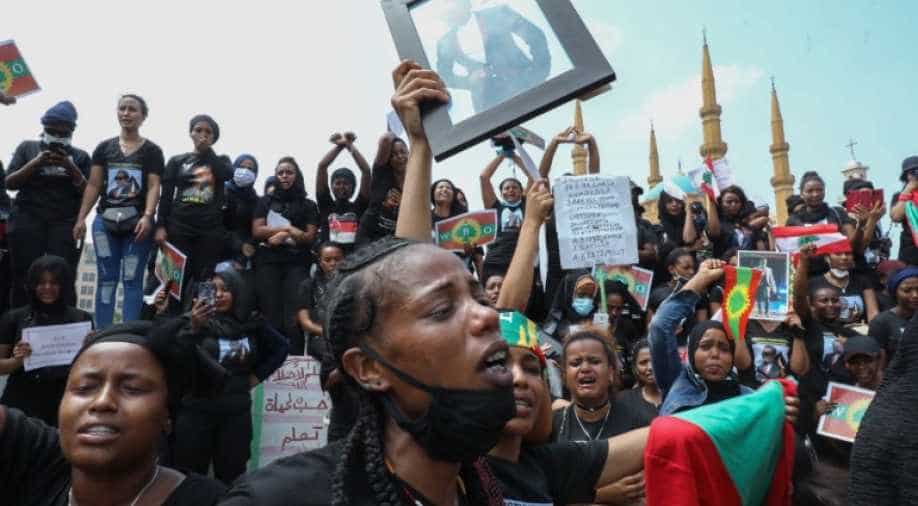 Members of the Oromo Ethiopian community in Lebanon take part in a demonstration to protest the death of musician and activist Hachalu Hundessa, in the capital Beirut on July 5, 2020 Photograph:( AFP )

Over 200 people are dead - mostly civilians

Ethiopia recently lost one of its most popular singers - Haacaaluu Hundeessa. On June 29, Hundeessa was assassinated in the capital Addis Ababa. Since then, protests have been raging across the country.

He inspired a generation of Oromo - Ethiopia's largest, but marginalised ethnic group. His anthems became a rallying cry during protests that overthrew the previous government.

Members of the Oromo community blamed other ethnic groups for the killing. Ever since, the state of Oromo has been locked in a bloody ethnic conflict. Over 200 people are dead - mostly civilians.

Reports say that some of the killings were carried out by military wings with hardline political views. The consequence of the prime minister Abiy Ahmed's decision to send troops to stop the violence. Following the unrest - the government has arrested 3,500 people, including high-profile opposition leaders and members of his own ethnic group - the Oromo.

Additionally, the internet has been cut off. Observers say - the crackdown was not just about ethnic clashes but also was a political cleansing to get rid of the opposition.

The Prime Minister Abiy Ahmed even appeared in military fatigues. He was awarded the Nobel Peace Prize for ending a war and raising hopes of democratic change.

Now, Ethiopia is returning to violence and chaos. Ahmed was touted as a young, democratic leader.

Elected to office in 2018, he espoused an Ethiopian nationalism not defined by ethnicity. He said he will knit together the 80 nations within Ethiopia.

Under him, political prisoners were released, and those in exile were allowed to return. Additionally, freedom of the press was restored. However, some of the groups continue to inflict violence. Last year, Ahmed’s top advisor and the army chief were assassinated, warranting more military action.

According to human rights organisations, the military is still committing abuses. Many believe Ahmed may return to the strongman tactics so familiar in Ethiopia until his election. After his initial reforms, Ethiopia was hailed as the model democracy in Africa.

Since April 2018 - borders between Ethiopia's nine ethnic federal states have been the scene of deadly clashes. Over three million people have fled their homes.

This makes Ethiopia the country with the highest number of internally displaced people.