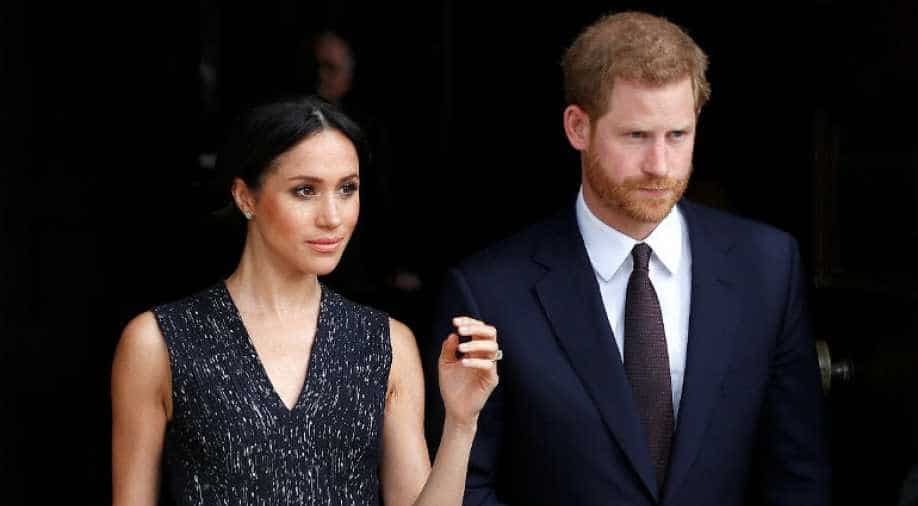 Prince Harry and U.S. actress Meghan Markle marry on Saturday in a lavish ceremony that unites the traditional pomp of British royalty with Hollywood glamour, injecting new life into a monarchy striving to stay relevant in the modern age.

Millions around the world are expected to watch when Elizabeth`s popular grandson and the American star of the TV drama "Suits" tie the knot at the 15th Century St George`s Chapel in Windsor Castle, the oldest and largest inhabited castle in the world.

As dawn broke over its ancient stone walls, excited crowds began to assemble, many draped in British and American flags.

"I just think it will be magical. There will be so much shouting and cheering and noise. I love the royal family," said Ronda Musgrove, 59, who camped overnight on the street opposite.

More than 100,000 fans are expected to cram the narrow roads of Windsor, about 20 miles (30 km) west of London. Security was tight and visitors had to pass through police search points set up around the castle, home to 39 English monarchs since 1066

The world`s media has been gripped by the union of Harry, 33, the sixth-in-line to the British throne, and Markle, 36, a divorcee whose mother is African-American and father is white, and hundreds of TV crews have descended on Windsor.

To some black Britons, the wedding is a fairytale which personifies the breakdown of barriers and reveals a more modern Britain where a person`s background is no obstacle to even the most elite and traditional of institutions.

To others, it is an irrelevance or mild distraction to the schism of Brexit which has deeply divided the United Kingdom, and polls have suggested that most Britons will not bother tuning in to watch the event.

The bride will arrive at the church with her mother, Doria Ragland, 61, with whom she was spent Friday night at a luxury hotel. Harry was staying at another hotel with elder brother and best man Prince William, whose daughter Charlotte and son George will be among the bridesmaids and page boys.

Markle will enter the chapel unescorted. Then Harry`s father and heir-to-the-throne Prince Charles will walk his future daughter-in-law down the aisle.

Her own father Thomas Markle, 73, a lighting director for TV soaps and sitcoms, pulled out this week, telling the U.S. celebrity website TMZ he had undergone heart surgery on Wednesday.

Confusion over his attendance marred the build-up to the wedding, which had been carefully choreographed for months by royal aides and his name still appears in the order of service.

On Friday, Ragland met the 92-year-old monarch and her husband Prince Philip, 96, who will be among the senior royals in the 600-strong congregation. It will also include a smattering of celebrities, including fellow cast members of Markle from "Suits".

The service will be conducted by the Dean of Windsor with Justin Welby, the Archbishop of Canterbury and the spiritual head of the Anglican Church, overseeing the exchange of vows. A black U.S. bishop, Most Reverend Michael Bruce Curry, will give the wedding address.

In a sign of modernity for the Royals, Harry will wear a ring while Markle will vow not to obey her husband. Interspersed with traditional hymns, a choir will perform American soul singer Ben E. King`s 196o`s hit "Stand by me".

After the ceremony, the newlyweds are expected to greet some of the 1,200 members of the public specially invited into the grounds of the castle before setting off on a carriage procession through Windsor.

A reception will be held in the castle`s St George`s Hall before 200 guests join the couple at an evening event at Frogmore House, another grand mansion in the grounds.

The prince and his new wife, who are expected to be given a new title by the queen to mark their marriage, are not immediately leaving on honeymoon and will carry out their first official engagement as husband and wife next week.

Educated at the exclusive Eton College, a stone`s throw from Windsor, Harry, the younger son of the late Princess Diana, gained a reputation as a royal wild child.

He admitted smoking cannabis, getting drunk when underage in a pub, scuffled with paparazzi outside a London nightclub and drew outrage by dressing as a Nazi officer at a party.

But he turned his image around after joining the army, where he spent 10 years and included two tours of duty in Afghanistan.

Last year, he spoke openly of his emotional torment following the 1997 death of his mother in a Paris car crash. Aged just 12, he walked solemnly behind her coffin in the funeral cortege.

His easy-going manner with the public is reminiscent of Diana, and he has picked up her campaigning baton with work on the welfare of military veterans, helping those with AIDS, and mental health issues.

He met Markle on a blind date in July 2016 set up through a mutual friend. Harry said he had never heard of his future wife or watched her TV series, and she said she knew nothing of the prince.
But after just two dates, he whisked her off to Botswana for a holiday, camping under the stars.

"The fact that I fell in love with Meghan so incredibly quickly was confirmation to me that all the stars were aligned, everything was just perfect," Harry said when their engagement was announced last November.

Harry`s gilded upbringing is in stark contrast with Markle`s. She was born and raised in Los Angeles and her parents divorced when she was six.

After a number of minor roles in films and on TV, she won the role as Rachel Zane in "Suits". She ran a successful lifestyle blog, thetig.com, and has worked as a humanitarian campaigner. In 2011, she married film producer Trevor Engelson but they divorced in 2013.

The intense spotlight on her father this week was indicative of the limelight she now faces.

Harry, who has long had a testy relationship with the media, issued a public rebuke to journalists when they were dating, accusing some of sexism and racism. His mother`s limousine was being chased by paparazzi just before her fatal crash.

Over the last 20 years since Diana`s death, the Royals have enjoyed much better media coverage with a sophisticated PR operation helping to turn round the perception of a hopelessly out-of-touch institution where the tribulations of the queen`s children were played out in national newspapers.

Elizabeth famously described 1992 as an "annus horribilis" (horrible year) after three of her four children’s marriages failed, including Charles` marriage to Diana, and part of Windsor Castle was badly damaged by fire.

The British remain broadly supportive of the monarchy albeit with a sense of mild irony about the pomp and pageantry that accompanies it, though many have deep respect for Elizabeth, after her 66 years of service.

Harry, along with brother William and his wife Kate, are at the forefront of an effort to modernise the monarchy by talking openly about their innermost feelings.

"It is just a maxim it is patently obvious the more you say, the more you can be examined," royal historian Hugo Vickers said. "Everything moves on gradually but there are certain risks and there is a lot to be said for maintaining the mystique."