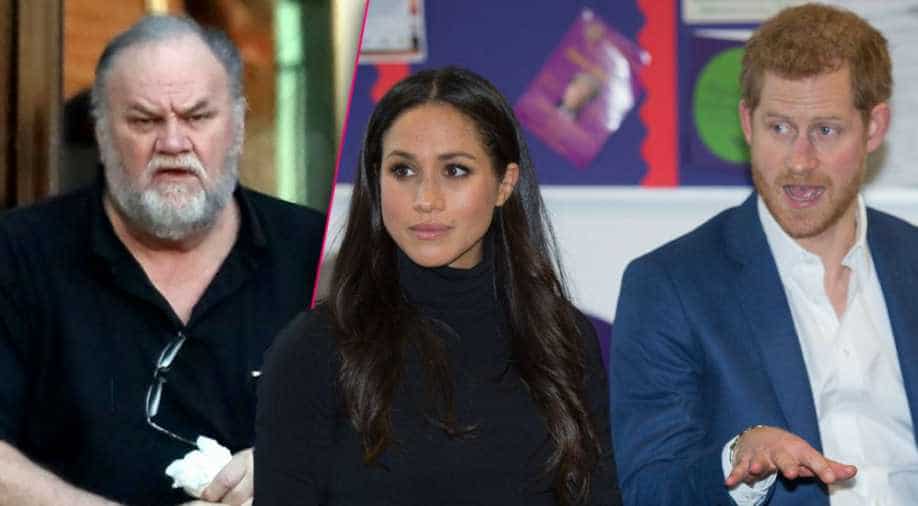 Meghan Markle's father overshadowed his daughter's wedding to Prince Harry by sowing confusion about whether he would walk her down the aisle or snub the British royal family by pulling out of the intricately planned celebration at the last minute.

As royal fans convened on the genteel English town of Windsor where Harry is due to wed the American actress on Saturday, the role of her father, Thomas Markle, was still unclear after he issued a flurry of statements to an American news website.

On Monday he was reported by the Los Angeles to be unable to attend due to a heart attack and embarrassment over whether he had staged pictures with a paparazzi photographer. But at the same time on Tuesday he had changed his mind and would go to be part of history.

In an interview, he said that the trip was off due to his need for immediate heart surgery.

On Wednesday it was reported that Markle was out of surgery where Markle had spoken that "he seemed alert and coherent, telling us doctors implanted stents in his blood vessels." It was not known when he would be out of the hospital.

Markle, who lives in Mexico, had been due to walk his daughter down the aisle on Saturday at St George`s Chapel in Windsor Castle in front of 600 guests including all the senior British royals and a smattering of celebrities.

One of the leading newspapers of Britain had to scramble to update its front page to reflect what it called the "Royal Sensation" of Thomas Markle`s absence under the headline: "I`ve got heart op today". It offered four pages of analysis.

"It must be heartbreaking for them because her father can`t come because he is in poor health," said 46-year-old Maria Scott who had travelled from Newcastle to camp out in Windsor to get a glimpse of the couple on Saturday.

"It must be really upsetting but I`m sure her mum will do a fine job," Scott told Reuters.

Harry, grandson of Queen Elizabeth and sixth in line to the throne, and Markle, a star in U.S. TV drama "Suits", will tie the knot at Windsor Castle, home to the British royal family for nearly 1,000 years.

On Windsor`s streets, hundreds of tourists and journalists mingled with dedicated royals fans - some draped with UK flags and holding photographs of Harry and Markle - while armed police patrolled. Some fans are sleeping out on the street until the wedding, seeking to secure the best positions to see the couple.

"I want them to come through those gates. I want them to look at me, wave and smile," Donna Werner, who flew 3,000 miles from New Fairfield, Connecticut, to be in Windsor told Reuters."That will make it all worthwhile. It really will," said Werner, 66, camped outside the Castle, dressed head to toe in a mix of British and U.S. flag-themed attire, including a shirt that read "Prince Harry, I`m still available. Last chance!"

Windsor, which is dominated by the royal castle, was decorated with swathes of red, white and blue "Union Jack" flags. Stalls sold Harry and Meghan scarves for 15 pounds ($20) and commemorative caps for 10 pounds.

More than 100,000 people are expected to descend on the town on Saturday. They will have to clear airport-style security before being allowed near the main venue, said Superintendent Jim Weems, the police`s tactical commander for the day.

Britain is on its second-highest threat level of severe, meaning an attack by militants is considered highly likely. Last year 36 people died in four attacks. Despite the tight security, Weems said there was no particular threat against the wedding.

"There`s no intelligence to support that this event is going to be particularly targeted," he told Reuters.

Harry, 33, a former army officer and one-time royal wild child, met his bride-to-be on a blind date in July 2016 after being set up through a mutual friend.

Beyond the pomp of a royal wedding which enthrals millions, the union marries the Hollywood glamour of Markle with one of the royal family`s most popular members.

As a divorcee, with a white father and an African-American mother, Markle`s background has provided a source of huge interest and comment, not all positive.

Details about the wedding have been closely controlled by Kensington Palace but reports of Thomas Markle`s intentions have thrown their intricate plans into flux. Kensington Palace declined to comment on Wednesday.

The bride-to-be`s parents are divorced and while Harry has been pictured with her mother Doria Ragland, 61, there had been speculation about the relationship with Thomas Markle, a former lighting director for TV soaps and sitcoms.

Thousands of journalists are descending on Windsor, and Thomas Markle told a channel earlier this week that the media attention had taken its toll.

He said he had been offered up to $100,000 for interviews and been ambushed by paparazzi whose snaps had shown him buying beer and looking dishevelled. It was also heard that he had agreed to the staged pictures, which showed him looking at images of the couple on a computer and being sized up for a suit because he hoped they would improve his image.

In response to the initial reports on Monday, Kensington Palace said it was "a deeply personal moment for Ms Markle", asking for respect and understanding for her father.