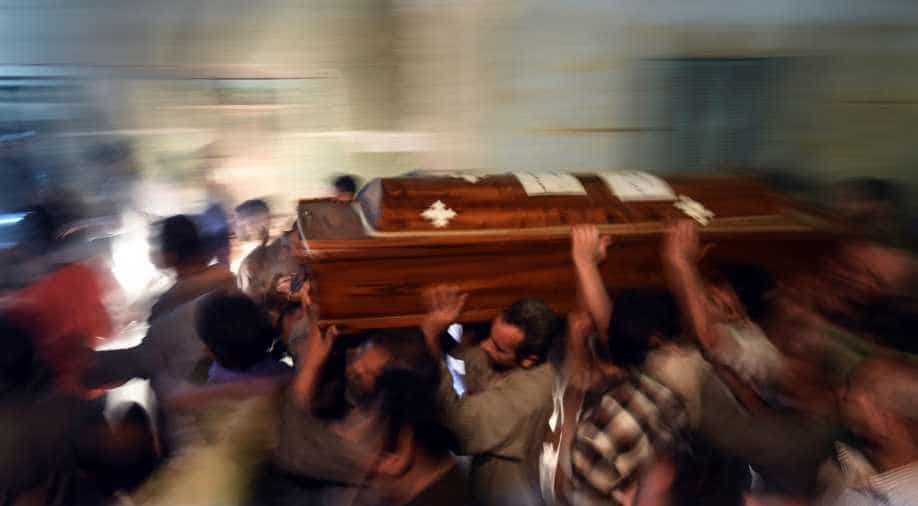 Relatives of one of the 28 Coptic Christians who were killed Friday carry a coffin as they gather outside the Abu Garnous Cathedral. Photograph:( AFP )

Assailants in three pick-up trucks attacked the bus as it was heading for the Saint Samuel monastery in Minya province, more than 200 kilometres (120 miles) from Cairo, before fleeing, the interior ministry said.

It was the latest attack on Copts after Islamic State (IS) group jihadists bombed three churches in December and April, killing dozens of Christians.

"Egypt will not hesitate in striking terror camps anywhere, either inside (the country) or outside it," Sisi said.

A spokesman for the pro-Al-Qaeda Majlis Mujahedeen Derna, which controls the city, said the Egyptian air force carried out eight raids on the city without causing casualties.

Addressing US President Donald Trump, Sisi said: "You have said that your priority is to confront terrorism, and I trust you are capable of doing that."

In a statement released in Washington, Trump said: "The bloodletting of Christians must end, and all who aid their killers must be punished."

"Terrorists are engaged in a war against civilisation, and it is up to all who value life to confront and defeat this evil."

No group has yet claimed responsibility for attacking the bus.

Footage on state television showed the bus riddled with bullet holes, while cellphone footage and pictures on media sites showed victims lying in the desert sand.

State television quoted a health ministry official as saying a "large number" of the victims were children.

It came after jihadists had threatened more strikes against the Copts, who make up about 10 percent of Egypt's 90-million population.

The north Minya town of Maghagha saw scenes of anger and despair on Friday.

A group of around 50 men gathered near a church where the funeral of two victims was held, calling for the interior minister to quit.

Nearby, a dozen women in dusty black robes cried and moaned.

In a statement on its spokesman's Facebook page, the Coptic Church called for "measures to be taken to prevent the dangers of those incidents that tarnish Egypt's image".

On April 11, bombers attacked two churches north of Cairo on Palm Sunday, killing 45 in the deadliest strike in living memory against the Copts.

The bombings prompted Sisi to declare a three-month state of emergency.

The Egyptian affiliate of IS has also killed several Copts in North Sinai, forcing dozens of families to flee in January.

In late April, Francis visited one of the bombed Coptic churches and condemned violence carried out in the name of God.

After Friday's attack, he sent a message to Sisi saying he was "deeply saddened to learn of the barbaric attack, calling it a  "senseless act of hatred".

Al-Azhar, Egypt's top religious authority, condemned the shooting on the eve of the start of the Muslim holy month of Ramadan.

"The Minya incident is unacceptable to Muslims and Christians and it targets Egypt's stability," Al-Azhar's Grand Imam Ahmed al-Tayeb said in a statement.

Condemnation also poured in from Israel, the Palestine Liberation Organisation, Russia and France.

Paris mayor Anne Hidalgo said the Eiffel Tower lights would go dark after midnight in solidarity, as also happened on Tuesday after the Manchester Arena attack.

A statement from Benjamin Netanyahu's office said the Israeli premier "sends the condolences of the Israeli people to President al-Sisi and the Egyptian people".

Russian President Vladimir Putin denounced the "barbarism and cruelty of terrorism", and French Foreign Minister Jean-Yves Le Drian tweeted that no one "should fear for their life by practising their faith".

A suicide bomber attacked a church in 2011, and there have been deadly clashes with Muslims, especially in the rural south, following disputes over church construction.

Egypt says it has identified those behind the April church bombings, saying they were part of an extremist cell based in southern provinces, offering a reward for their capture.

Sisi has defended the performance of his security forces and accused jihadists of trying to divide Egyptian society by attacking vulnerable minorities.