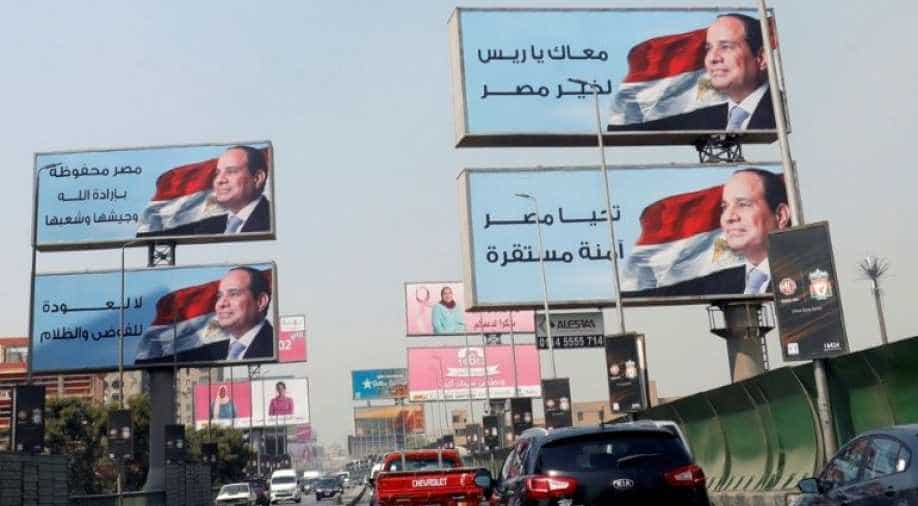 The crackdown, which rights activists say was the most intensive campaign of arrests for years, came after rare protests against President Abdel Fattah al-Sisi in Cairo and other cities in late September.

Egypt has been trying to deflect criticism of its human rights record and prison conditions ahead of a U.N. review in Geneva on Wednesday that comes in the wake of thousands of new arrests.

The crackdown, which rights activists say was the most intensive campaign of arrests for years, came after rare protests against President Abdel Fattah al-Sisi in Cairo and other cities in late September.

More than 4,400 were detained, among them prominent activists, lawyers, academics and political figures, according to the Egyptian Commission for Rights and Freedoms.

Around 3,000 are still being held under charges including using social media to spread false news, joining a banned terrorist group, and protesting without a permit, ECRF said.

In late September, Egypt's public prosecution acknowledged the arrest of not more than 1,000 people accused of involvement in the protests.

Some of the detained are in Cairo's Tora prison, where relatives and lawyers say inmates are often held in poor conditions and denied adequate healthcare.

Tora is the prison complex in which former president Mohamed Mursi, whose overthrow in 2013 was led by Sisi, suffered a fatal heart attack in June during a courtroom hearing.

U.N. experts said on Friday the prison regime may have led directly to Mursi's death after he was held in solitary confinement for 23 hours a day and was denied life-saving care for diabetes and high blood pressure.

Thousands more are at severe risk, the experts said, adding that two senior former aides of the banned Brotherhood were "effectively being killed by the conditions under which they are held and the denial of medical treatment".

Egyptian officials have denied mistreating prisoners or neglecting their health.

On Sunday, Egypt's State Information Service released a video of an inspection of Tora by officials from the state security prosecution service. It included interviews with two prisoners who said they were largely satisfied with conditions.

A series of photos at the start of the film showed the officials visiting a well-stocked pharmacy and grocery shop and tasting food in the prison refectory.

On Monday, selected local and foreign journalists were invited to visit Tora, where they were shown a football match for prisoners, farm animals, and a metal workshop, but were not allowed to talk to inmates, according to one reporter present. Reuters was not invited on the visit.

State TV has also aired a short programme on the detention system with a commentary saying that prisons are being modernised in line with international standards.

Criticism from Western powers keen to develop security and economic ties with Sisi's Egypt has been muted, and the session in Geneva provides a rare forum in which they can pose questions publicly.

The U.N. Human Rights Council will be reviewing Egypt's record for the first time in five years, as part of the forum's regular appraisal of all U.N. member states.

Advance questions cover prison conditions, torture and the recent arrests of activists, among other issues. One rights lawyer, Mohamed al-Baqer, was interrogated over his engagement with the U.N. review following his detention, according to a question submitted by Liechtenstein.

It said that since accepting 237 out of 300 recommendations at its last review in 2014, Egyptian authorities had "adopted even more repressive measures that further restricted basic rights and freedoms".