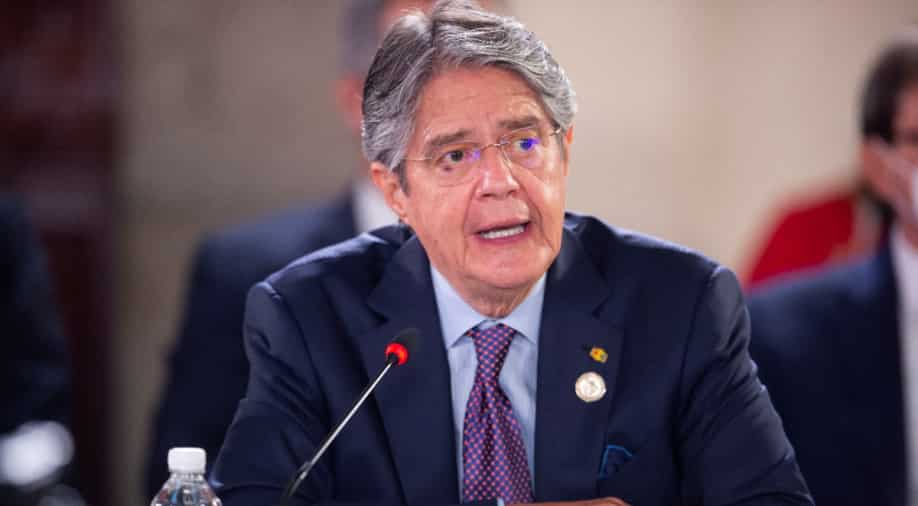 File photo: Ecuador's President Guillermo Lasso delivers his speech during the summit of the Community of Latin American and Caribbean States (CELAC), at the National Palace in Mexico City, Mexico Photograph:( Reuters )

Ecuador's economy is highly dependent on oil revenues, with 65 percent of output exported in the first four months of 2022

President Guillermo Lasso announced Sunday that Ecuador will cut fuel prices, which had sparked weeks of demonstrations, though not by as much as protesters have demanded.

The powerful Confederation of Indigenous Nationalities of Ecuador (Conaie), which since June 13 has been blocking roads and occupying oil wells in different parts of the country, had demanded a reduction in prices by an additional 30 cents and 35 cents, respectively.

Earlier on Sunday, the country's energy ministry warned that oil production had reached a "critical" level and could be halted entirely within 48 hours if the protests and roadblocks continued.

The protests, which are also against rising living costs, have crippled transportation in Ecuador, with roadblocks set up in 19 of the oil-rich country's 24 provinces.

"Oil production is at a critical level," the ministry said in a statement.

"If this situation continues, the country's oil production will be suspended in less than 48 hours as vandalism, the seizure of oil wells and road closures have prevented the transport of equipment and diesel needed to keep operations going."

"Today, the figures show a decrease of more than 50 percent" in production, which was at roughly 520,000 barrels per day before the protests, it said.

Ecuador's economy is highly dependent on oil revenues, with 65 percent of output exported in the first four months of 2022.

Late on Sunday, the country's parliament suspended seven hours of debate over whether to impeach Lasso, with proceedings set to resume on Tuesday. At least 20 members of parliament are still due to speak.

The president's impeachment would require 92 of the 137 possible votes in the National Assembly, where the opposition holds a fragmented majority. MPs will have a maximum of 72 hours to vote following the end of the debate.

An estimated 14,000 protesters have taken part in the nationwide demonstrations, most of them in Quito.

Shortages are already being reported in the capital, where prices have soared.

Violence between police and demonstrators has reportedly left five dead, while about 500 people have been injured.

"Each additional day of downtime represents $40 to $50 million lost," he said on Sunday.

Overall losses since the protests began include 8.5 million liters of milk worth $13 million as well as $90 million in agricultural goods and livestock.

The tourism industry has seen cancellations rise to 80 percent, with losses amounting to at least $50 million.

Additionally, "in the flower farm sector, 12 days of shutdown resulted in $30 million in losses and damage to trucks and farms," Prado said.