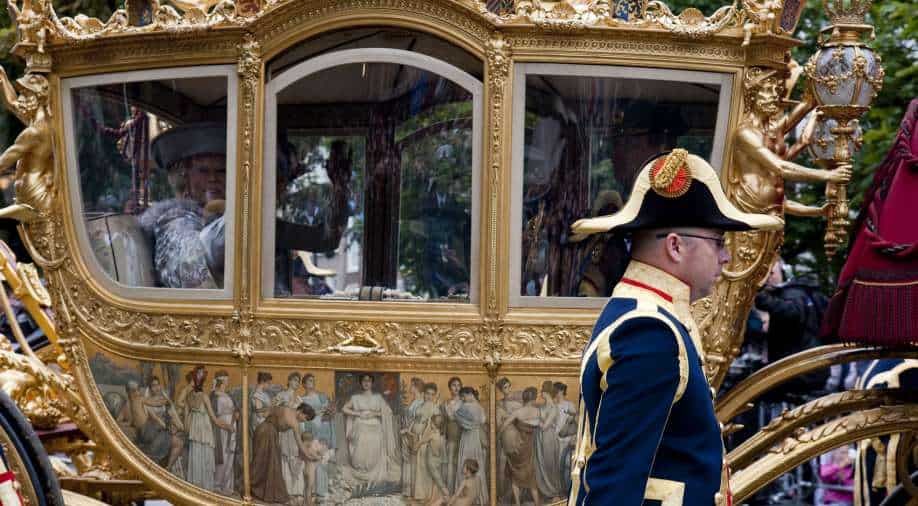 The golden carriage has been out of use since 2015 Photograph:( Agencies )

In a video message, King Willem-Alexander announced the retirement of the carriage, called De Gouden Koets, on Thursday while acknowledging that it was offensive to a large number of people

The Dutch king, Willem-Alexander, has announced that the royals would henceforth stop using a historic golden coach, which features images that glorifies the country’s colonial past, amid controversy over the Netherlands’ slavery links.

Called ‘Tribute from the Colonies’, the image—which is on the left panel of the coach—depicts black and Asian people kneeling and offering goods, including cocoa and sugarcane, to a seated young white woman on a throne representing the Netherlands.

In a video message, King Willem-Alexander announced the retirement of the carriage, called De Gouden Koets, on Thursday while acknowledging that it was offensive to a large number of people.

“There is no point in condemning and disqualifying what has happened through the lens of our time," he said.

"Simply banning historical objects and symbols is certainly not a solution either. Instead, a concerted effort is needed that goes deeper and takes longer. An effort that unites us instead of divides us.”

King Willem-Alexander expressed his hope that the coach could be used again in future, once the Netherlands had healed its colonialist legacy of racism.

"As long as there are people living in the Netherlands who feel the pain of discrimination on a daily basis, the past will still cast its shadow over our time," he said.

The golden carriage—which is used to carry the royals to state events such as the opening of parliament— has been out of use since 2015.

It is currently placed at the Amsterdam Museum following a lengthy restoration process which concluded last year.

The Dutch colonised a lot of countries from Asia to Africa. Some of them include Brazil, Guyana, French Guiana, Indonesia, Sri Lanka, Taiwan, Suriname, South Africa.